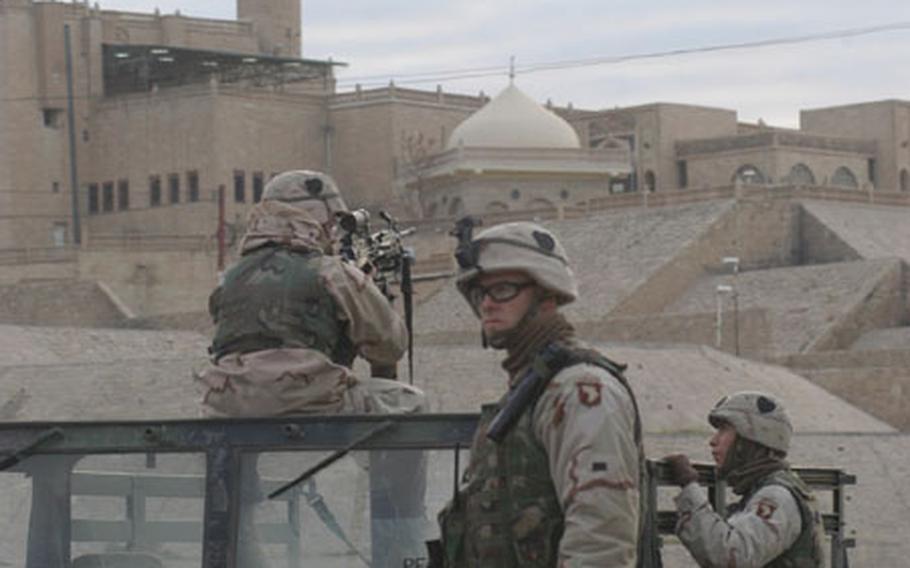 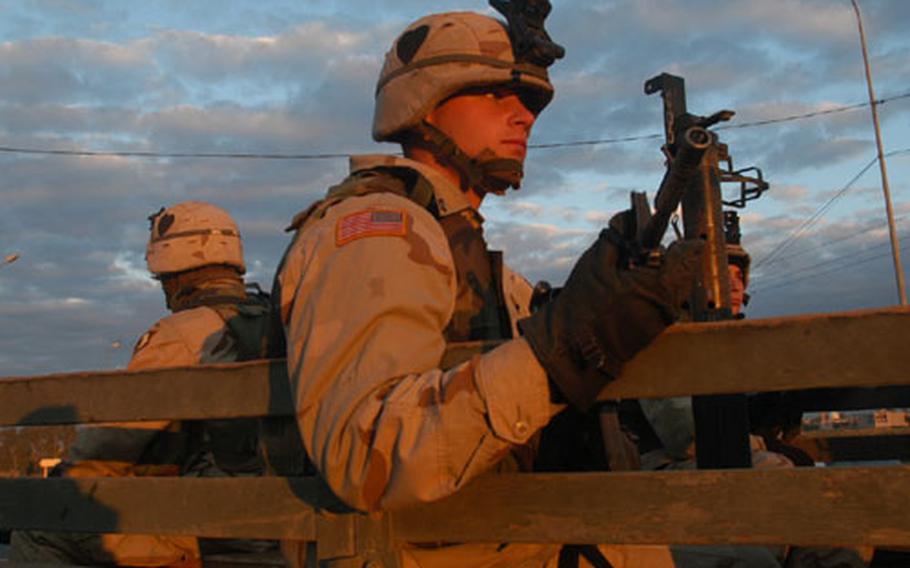 Pfc. Brent Phillips, 20, a mortarman from Hickory Ridge, Ark., sits in the back of a Humvee with an M4 carbine during a morning patrol for roadside bombs Friday in Mosul in northern Iraq. (Kendra Helmer / S&S)

MOSUL, Iraq &#8212; Every morning, the soldiers of the 101st Airborne Division pull on their boots, climb into their Humvees and search for roadside bombs.

For four months, the soldiers of the division&#8217;s 3rd Battalion, 2nd Brigade Combat Team, 502nd Infantry Regiment, have scanned the garbage-strewn roadside for anything amiss.

A few stones lined up on a sidewalk could signal something more ominous, a reference point for a bomb.

Violence has increased against troops recently, with more than 60 killed in hostile action in November, more than in any other month since President Bush declared the end of major combat on May 1. In Mosul, where the 101st Airborne Division has its headquarters, there has been an increase in violence against soldiers after months of relative calm.

The division doesn&#8217;t compile statistics on types of attacks, but officials say there were 63 attacks on division forces in October. Most involved roadside bombs, small-arms fire or rocket-propelled grenades, and most did not injure any U.S. troops, officials said.

Some units walk their sectors at sunrise to search for bombs left under the cover of darkness. Soldiers said that their regular morning presence may keep attackers from planting bombs overnight.

Just five hours earlier, the soldiers had returned from a house search where they seized a suspected bomb, weapons and ammunition. But the late night didn&#8217;t mean a lazy morning: The dawn patrol is conducted every day without fail.

Up the road from the camp, the Humvees stop near a bridge, where soldiers and locals have found bombs hidden in trash before. A detonation there earlier this month injured several Iraqis. Some soldiers walk the street as others climb a littered hill to scan gardens and concrete chunks. From the vehicles, more soldiers guard the ones on foot.

The company patrols a section of the main supply route that all convoys travel.

Even though the group tries to vary its routes, patrolling the same area at the same time each day makes the soldiers predictable targets, they said.

Despite the danger, soldiers say they believe the foot patrols are more effective than scanning the roadside from a vehicle.

At intersections, the group splits up and soldiers head 1,000 feet in each direction before linking back up.

The soldiers get quite a few stares from passers-by in cars and men pushing carts of vegetables. Near the Nabi Younis mosque, where Jonah &#8212; the biblical character who survived three days inside a whale &#8212; reportedly is buried, children peek from behind walls and give the soldiers thumbs-up.

Soldiers aren&#8217;t the only ones looking for bombs. Iraqis report at least one a day in the division&#8217;s area, Tyler said.

During a patrol on Nov. 21, the 3rd Battalion mortarmen talked about how they hadn&#8217;t had many problems in their sector and credited their regular morning presence. Three days later, soldiers from the battalion were ambushed near the camp. A roadside bomb detonated, severely injuring one soldier&#8217;s leg.

Other 101st Airborne Division soldiers have died in the past week.

On Nov. 23, gunmen killed two soldiers driving through Mosul. And on Friday, one soldier died when a palace was shelled.

Two hundred ninety-eight servicemembers have been killed and 2,094 have been injured as a result of hostile action since the beginning of military operations in Iraq, according to the Department of Defense Web site. Tyler said more than 50 soldiers with the 101st Airborne Division have died since arriving in the Middle East in March.

As of Friday, overall 434 servicemembers have died and 2,444 have been wounded since Operation Iraqi Freedom began, according the the DOD Web site.