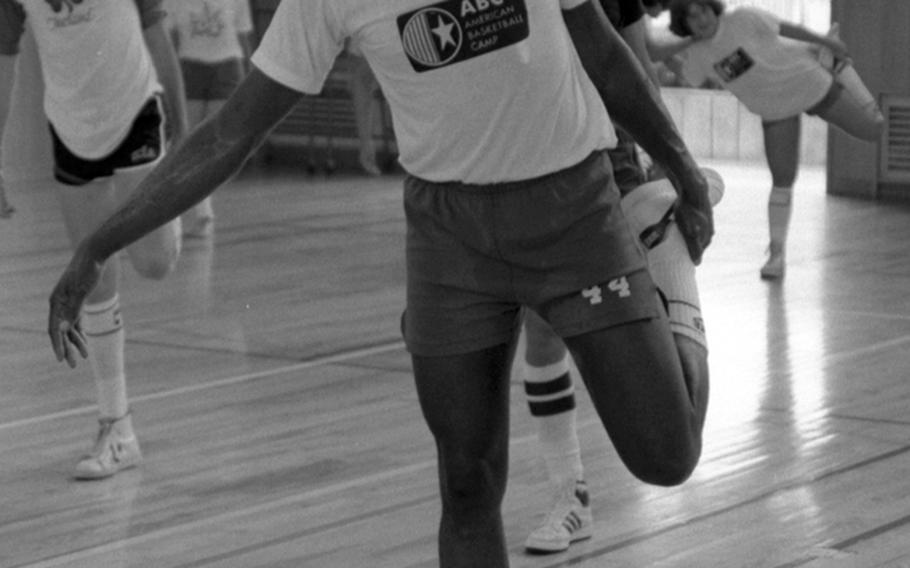 NBA star David Thompson flexes for the crowd at his basketball camp in Japan in 1983. (Brad Lendon/Stars and Stripes) 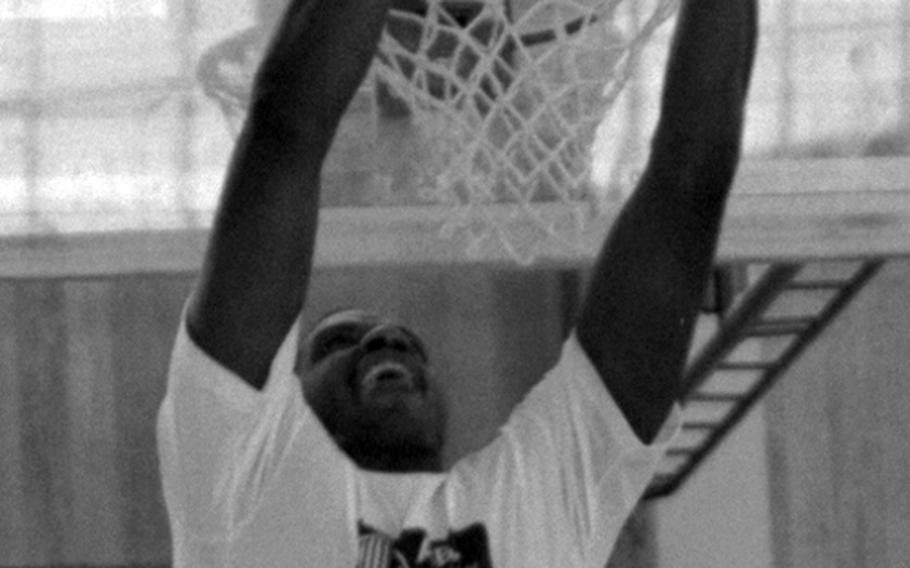 TOKYO &mdash; It's a hot, muggy day in Tokyo and the action in the non-air-conditioned gymnasium makes things even worse.

But on the court, David Thompson doesn't notice, or if he does, he doesn't care.

Dripping with sweat and out of breath, Thompson obliges yet another request for his famous dunk shot &mdash; a move that strikes awe in the 40-some kids who have stopped shooting layups and free throws and formed a semi-circle around the basket.

With the attentive audience, Thompson turns on the razzle-dazzle &mdash; over-the-head dunks, behind-the-head dunks, 360s, dunks off rebounds &mdash; and as a finale, he stuffs two balls into the net where they stick like cement.

On the sidelines, pretty Cathy Thompson, David's wife of five years, throws her head back and hollers approval.

"He is great isn't he?" she says. "He dunked like that over Kareem (Abdul-Jabbar) one time this year and the fans went absolutely crazy," she says and waves to Thompson, who glances her way to flash a shy but triumphant grin.

"I really want that to happen again this year," she says, turning away from the activity. "The problems really are behind us now. We don't want to dwell on this drug thing because it's in the past. We said we'd start off fresh with this camp and I really believe we will."

THOMPSON, A spectacular guard whose battles on the court have made him one of the best in the game, now battles other opponents, including a nagging knee injury, the uncertainty of free agency and "the drug thing" &mdash; the problem that almost cost him everything.

Drug use is a common occurrence in professional athletics today, but not common enough to be condoned or to erase the stigma that lingers long after it is gone.

Sipping a tall beer after finishing the day's clinic, Thompson nods his agreement. "I have talked about it 'till my face is blue," he says, "and I imagine people are still going to ask about it for quite some time."

In March, Thompson, who became the highest paid rookie in professional history when he signed with Denver in 1975, spent a month in the Washington House, a suburban Denver treatment center for drug and alcohol dependency.

Traded to Seattle last year because of "difficulties" in Denver, Thompson has long been rumored to have had a problem with cocaine. He surprised few when he told Sonic Coach Lenny Wilkins that he needed help.

"I tried to stop and couldn't," Thompson said. "I thought I had everything pretty much under control, but when I was hurt it got pretty depressing because things were looking so good for me.

"Being out at that time and being up there (in Seattle) by myself not really knowing too many people &mdash; it was just a way to cope with the moment and the solitude," he said, adding that although Cathy and their two children were with him, it wasn't the same as being with his friends back in Denver.

FRIENDS HAVE always been important to Thompson. He has kept close contact with former college teammate Monte Towe, now head coach at the University of Florida. Together, they led North Carolina State to the national championship in 1974 and Thompson still refers to the 5-foot-6 guard that fed him the alley-oop as "the best little guy around."

And he's kept close with Denver, choosing to live there in the off-season to be near the fans that idolized hint as a Nugget and still follow him as a Sonic.

"You wouldn't believe the thousands of cards and letters we've gotten from people all over the nation," Cathy says. "And all supporting him. Not one of them was bad," she adds.

"People seem to know, I think, that if David wasn't a professional basketball star, his treatment would mean nothing," she said.

But the fact that he became a star &mdash; almost overnight &mdash; was what triggered his drug use, she said.

"It was a combination of everything,. really," she said. "When he signed with Denver he was very publicized and the pressure was on him. Everyone deals with pressure in different ways," she said.

With Denver, Thompson was voted Rookie of the Year his first season and he went on to average 24.1 points per game, for a total 11,992 points in his seven seasons there. A three-time All-American in college, Thompson has been named five times a professional All-Star, and was voted Most Valuable Player twice &mdash; once in the National Basketball Association and once in the American.

But his career took a slide in 1981. A knee injury early in the season put Thompson out of action for several weeks and when he did return, he was the odd man out.

He remained a force from the bench, however, several times scoring 30 points or more and keeping his rebounding statistics among the best. But it wasn't enough. He thought he should have been starting, or at least seeing more than 20 minutes of playing time.

Thompson made no effort to conceal his discontent with Brown and the Denver club. He started showing up late for practice and after not showing up at all, Brown slapped him with a four-game suspension.

It was then that the drug rumors surfaced.

"I used drugs then, but it wasn't a problem, it was light. There was a lot of guys that played on the ball club that used much more than I ever thought of using in Denver," he said.

"But if you're making a lot of money and you're an NBA star, then people just expect you to do drugs," he said.

That year Thompson finished with a mere 14.9-point average, playing in 61 games. He asked to be traded and was dealt to Seattle for Wally Walker and the Sonics' first-round. pick in the 1982 draft.

Anxious for a new beginning, Thompson helped Seattle to win its first 12 games and was one of the leading scorers in the league. But in the 14th game, he suffered another injury to his knee and was forced to undergo arthroscopic surgery and missed eight games. The Sonics started losing.

"I think I came back too early. Because the team was losing they wanted me to be at full strength as soon as possible, but I think I was placed back in the lineup too quickly. My knee still wasn't anywhere close to being 100 percent" and it continued to bother him all season.

Although describing his use of cocaine as "every now and then," Thompson admitted that it took a toll on his body. He wasn't able to get the proper sleep before practice and before games and was constantly run down.

"I'd go a long period of time without doing it, months," he said. "But I'd eventually get back to trying it again and I know it wasn't good for me or for my career." he said.

"It wasn't on weekends and it wasn't even after every game. But I just couldn't stop completely and it finally dawned on me that I couldn't quit on my own," he said.

"Of course I knew what was going on," Cathy says defensively, reluctant to elaborate. "I'm his wife."

"She was glad I decided to get treatment," Thompson said. "I know it was tough on her, too."

"HE NEVER really changed," Cathy said. "The problem didn't change him. He was unhappy and his confidence level was very low. He's basically a shy person and I think he's a lot more comfortable with himself now that it's all over with," she said.

And "over with" is a term she and David emphasize.

"I have no compulsion to do drugs anymore," he said. "It's just something that I got involved in &mdash; the sign of the times &mdash; there's a lot of guys in pro sports that do drugs and I just happened to be one of the victims," he said.

"But hopefully it's all behind me now and I have something to look forward to &mdash; living a life that's drug free."

Thompson has not fared well in the publicity department since details of his drug use were disclosed. Cathy, whose youthful appearance makes it hard to believe she's 28 and the mother of a 2- and 4-year-old, has taken charge.

She's spent the summer busily organizing charity events for David to attend and helped him land roles in two basketball clinics in Denver and one in Japan.

"Nobody has ever done that for him," she explained. "Everyone has always seemed so concerned with his money and what it can do for them, rather than what they can do for David.

"I wanted him to get back into the public eye under positive circumstances and doing clinics like these is one of the best ways," she said.

"I want to show people that David never really changed. That he's still the best basketball player in the league and still a very good person," she says with conviction.

WILKINS KING Jr., the founder of the American Basketball Camp in Japan, asked Thompson to head the camp this year because of the excitement Thompson generates on the court. But he admits that he had a few qualms because of the publicity.

"David assured me that his problem was over and done with and I was willing to take a gamble on him," he said. "He's one of the most exciting players in the NBA today and I felt that he could best convey that to the kids here. I have absolutely no regrets for signing him up, King said.

"He loves working with children," Cathy said, "and this has been very good. for him. His confidence is building, and that's what he needs right now."

Meanwhile, Thompson continues to worry about the basketball end of his career. His agent is negotiating with the Sonics, who have matching rights if another club should make Thompson, an offer. Thompson is sure he'll be back in Seattle when camp begins, but admits that it will be for less money than he has gotten in the past. It doesn't bother him.

"I HAVE A whole new outlook on this season: I have a whole new incentive and a whole new reason to want to succeed," he said.

"I'm more confident and my body feels a lot better. Before it was all taken for granted and now looking back you realize how few guys get to be where I was and how much you should cherish that and not let opportunities slip through your fingers.

"I'm going to give 125 percent to get back to the top of the basketball world," he says with conviction. "I'm going to set this league on fire again &mdash; that's my goal."