Daughter of Stuttgart sailor missing, is thought to be runaway 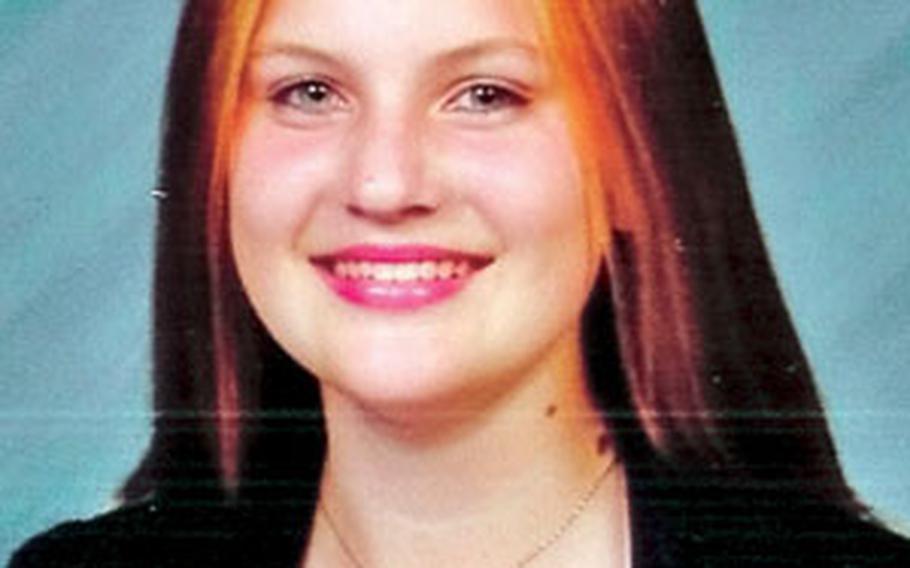 STUTTGART, Germany &#8212; U.S. military and German police are searching for a 15-year-old Stuttgart girl who apparently ran away from home on July 5.

Kristina Karr was last seen by her older brother at about 1:30 a.m. after returning to her Patch Barracks apartment after a July Fourth festival on the installation.

Her mother, Anne Karr, said Kristina had set her alarm for 4:30 a.m.

She added that no foul play was suspected in the girl&#8217;s disappearance.

Kristina Karr left home with two passports but not her military ID card, and about five days&#8217; worth of clothes. Anne Karr said she did not think her daughter had very much money.

Kristina is the daughter of Petty Officer 1st Class Joseph Karr, who works in the intelligence directorate at the U.S. European Command. Anne Karr said that the family had had no fights with Kristina and had no reason to suspect she would run away.

Kristina Karr is about 5 feet, 4 inches tall and weighs about 140 pounds, has long, light brown hair and hazel eyes, and two small scars on the left side of her neck. Anne Karr, the former registrar at Patch Elementary School, described her daughter as strong-willed, independent and a good student. She&#8217;d completed ninth grade at Patch High.

Kristina Karr&#8217;s status has been entered into the Installation Access Control System, which monitors when people enter U.S. installations in Europe, according to Art Richard, the provost marshal for Army Garrison Stuttgart.

If Karr tried to enter an installation using her passport, Richard said, the gate guards would be notified of her status and call military police. He said that German police have issued a Europe-wide missing person report on the girl.

Kristina Karr had a boyfriend at Patch Barracks whose family recently moved to Czech Republic. But the boyfriend said that he has had no contact with Kristina, Anne Karr said.