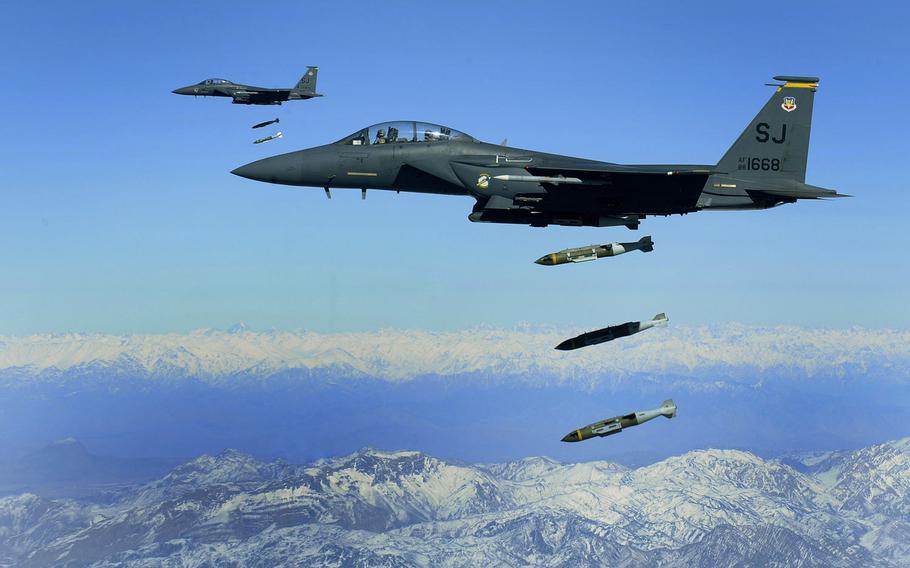 KABUL, Afghanistan — The Air Force dropped more than 500 weapons in Afghanistan last month — the largest monthly tally since 2012 — continuing an uptick seen throughout this year, according to newly released military data.

President Donald Trump has promised a stepped-up campaign against Afghan insurgents, and experts say the increased Air Force activity could become normal under his new strategy for the country, the details of which are still being finalized.

A total of 503 munitions were released in August, bringing the total for the past eight months to 2,487. That is nearly double the number used in combat during all of 2016.

Additional F-16s were sent to Afghanistan last month to “bolster the ability to conduct kinetic strikes” and for the “over watch of friendly ground forces,” said Air Forces Central Command, which released the data. MQ-9 Reaper drones are also active in the country.

Trump last month announced plans for a new strategy, which he said would include attacking “America’s enemies.”

“I will not say when we are going to attack, but attack we will,” Trump said in a televised speech.

Taliban insurgents have made significant gains across the country since NATO ended combat operations at the end of 2014. The guerrillas are said to control more territory now than at any other time since 2001, when a U.S.-led invasion ousted them from power.

Besides supporting the NATO mission, the U.S. conducts a separate counterterrorism mission in Afghanistan, which targets groups like al-Qaida and ISIS. Last year, in light of Taliban advances, President Barack Obama gave the military greater ability to fight the insurgents. Trump’s strategy could provide even more leeway.

Even before Trump announced plans for the strategy, the U.S. Air Force had increased the number of munitions it had dropped in Afghanistan in 2017. The spike in activity has coincided with a growing number of civilian deaths caused by airstrikes, which has prompted the United Nations to express concern.