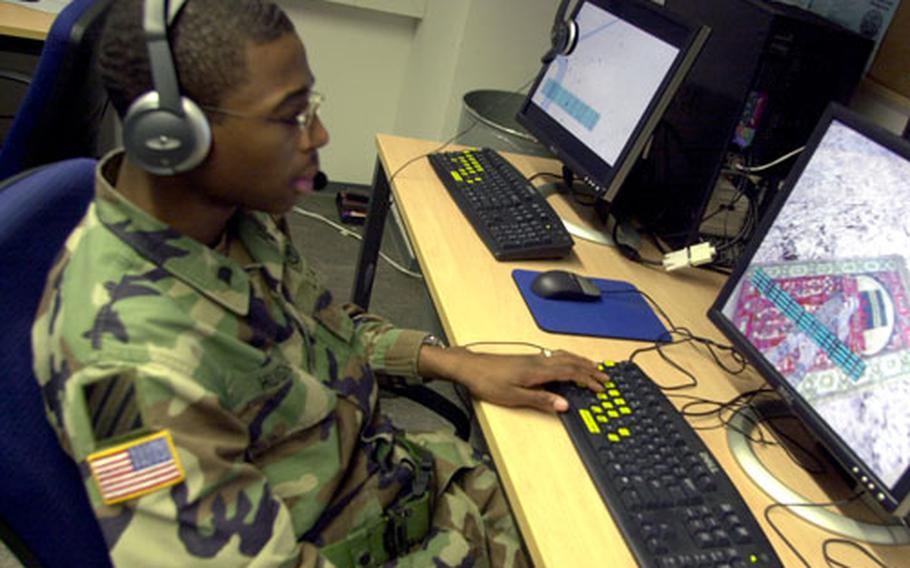 GRAFENW&#214;HR, Germany &#8212; A computer simulator that lets dozens of soldiers practice fighting insurgents in the same virtual environment is being tested at the Noncommissioned Officers Academy here.

DARWARS&#8211;Ambush is a computer simulation based on &#8220;Flashpoint,&#8221; a commercial World War II-based video game, said Northrop Grumman software engineer Quynh Tran as he rushed between a half-dozen computer monitors and several more walkie-talkies in an academy classroom on Friday.

Tran, 33, of Houston, was overseeing three missions, each involving two nine-man squads of cadets going up against six civilians, seated at computers nearby and acting as the opposing force in the virtual environment.

In the building next door, three classrooms were full of cadets sitting at computer monitors. The classrooms looked more like cyber caf&#233;s full of gamers than military training facilities. Each cadet&#8217;s monitor showed the Humvee he was driving or the dismounted soldier he was moving across a landscape resembling a small Iraqi town. Meanwhile a projector showed an overview of the action on a large screen.

The cadets&#8217; mission was to convoy supplies to a forward operating base. But their orders warned them to be on the look out for the &#8220;Mosh Bikair&#8221; &#8212; insurgents armed with small arms, grenades, rocket-propelled grenades and improvised explosive devices.

The mission started smoothly, but it wasn&#8217;t long before two Humvees were taken out by RPGs and a sniper started picking off dismounted soldiers.

Tran said the contractors who control the insurgents are all experts because they play DARWARS every day.

&#8220;You are just seeing a computer monitor. It is hard to watch what is going on,&#8221; he said. &#8220;In real life you can scan, but in this game it is like looking through a pair of binoculars the whole time and you can just see what is in front of you. If they had two other monitors near you, it might be more realistic.&#8221;

&#8220;Here we are focusing on using DARWARS to allow the NCO Academy to conduct small-unit tactics and convoy operations,&#8221; he said.

The software includes 18 preprogrammed missions that can be edited to fit the needs of trainers. The cadets use the simulator to do four missions, including reacting to an IED, reacting to contact, medevacing a wounded soldier and reporting enemy activities, Gilman said.

NCO Academy assistant operations sergeant, Sgt. John Green, 31, of Sudbury, Mass., said cadets used to train for the missions by walking around the woods next to the classrooms talking into radios.

DARWARS has been used at Fort Lewis, Wash., since 2004 and was used by Grafenw&#246;hr&#8217;s 529th Ordnance Company before the unit deployed to Iraq last October.

However, this is the first time the NCO Academy has used the system. The academy will be evaluating the cadets&#8217; performance in more traditional training after they have done DARWARS to gauge the training&#8217;s effectiveness, Green said.