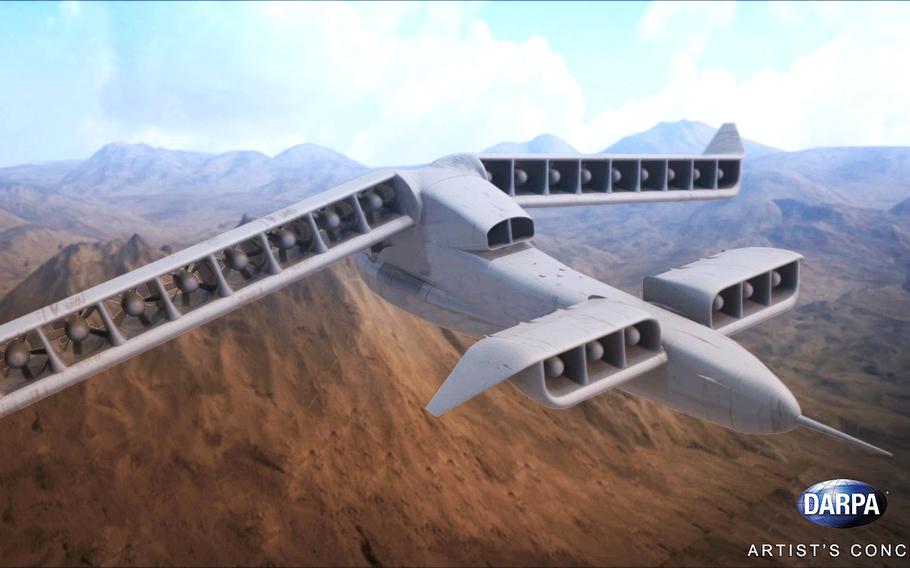 Now the Defense Advanced Research Projects Agency, the Pentagon’s tinker lab for far-out weapons and vehicle concepts, hopes an experimental aircraft might come a little closer to the best of both worlds.

The LightningStrike is a hybrid vertical takeoff and landing aircraft powered by a Rolls Royce gas turbine and 24 ducted fans driven by turbine-generated electricity. The fans are arrayed on a tilting central wing and a canard — a small stabilizing wing in the front — to give hover stability without adding too much weight, a compromise that builder Aurora Flight Sciences hopes can meet the goals set out by DARPA’s VTOL X-Plane program.

The agency wants a sustained cruising speed of 345 to 460 mph with improved hover efficiency and a decent load-carrying ability. The MV-22 tilt-rotor Osprey, perhaps the best-known VTOL aircraft in mass production, travels at about 316 mph and trades much of its hover efficiency just to reach that speed.

Aurora says individual control of each of the LightningStrike’s fans means more finely tuned hovering for landing and take-off. The aircraft is designed to be unmanned and autonomous. A cabin between the wing and canard could be added to carry a small number of troops.

The embedded fans contribute to the plane’s odd look, as does the canard, which resembles a tailplane on a normal aircraft. In an artist’s rendering and concept video, the LightningStrike looks like it’s flying backward.

DARPA’s goal isn’t to mass produce the aircraft — yet — it says, but to develop technology that could prove helpful in the future. The program also hopes to broaden VTOL’s horizons, DARPA program manager Ashish Bagai said in a statement.

“Imagine electric aircraft that are more quiet, fuel-efficient and adaptable and are capable of runway-independent operations,” Bagai said. “We want to open up whole new design and mission spaces freed from prior constraints, and enable new VTOL aircraft systems and subsystems.”