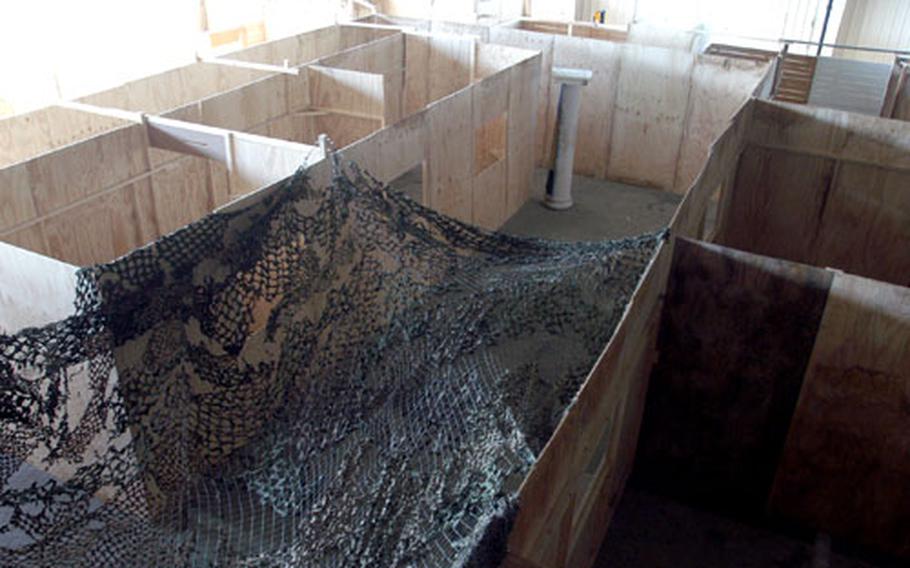 After navigating a tight alleyway, players can either turn the corner left and take their chances or turn right itno this area where they will almost inevitably get caught in a painful, though non-fatal, crossfire. (Matt Millham / S&S)

GRIESHEIM, Germany &#8212; Darmstadt&#8217;s new indoor paintball facility is all bruise and no splat.

Well, without the splat, use of the 8,000 square-foot Red Baron Paintball Indoor Scenario Field is a lot easier on players&#8217; wallets.

With regular filled paintballs, a daylong shootout runs about $60 per person for a set amount of ammunition.

But with reusable no-paint balls, the cost is a flat $30 per person and the ammo is unlimited.

Well, maybe not that bad.

But they are the same size and weight as a regular paintball. The difference is they don&#8217;t splatter on what they hit.

So how do shooters know if they they hit their target?

Thompson led the campaign to build the facility in an old hangar at the airfield outside of Darmstadt. After about three years of hoping, he got approval for his plan last year.

Thompson and a team of 30 volunteers built the mazelike warren of narrow alleys, crossfire courtyards and hiding spots in six weeks, completing it in November.

With the exception of 800 euros&#8217; worth of framing material and hardware, most of the wood was donated by units that had leftover equipment-bracing material after returning from downrange.

Brown has deployed twice to Iraq with the Darmstadt-based 22nd Signal Brigade.

He said paintball is better than the combat training he&#8217;s done with laser gear because it forces players to react to projectiles being fired at them.

Thompson said the facility is still a work in progress.

Units have used it to run through scenarios ranging from battling insurgents in house-to-house fighting to hostage rescues.

Monday-Friday: By appointment only for military and law enforcement training, groups and parties of 10 or more.

Weekends: Any ID cardholder can participate in open play from noon to 6 p.m.