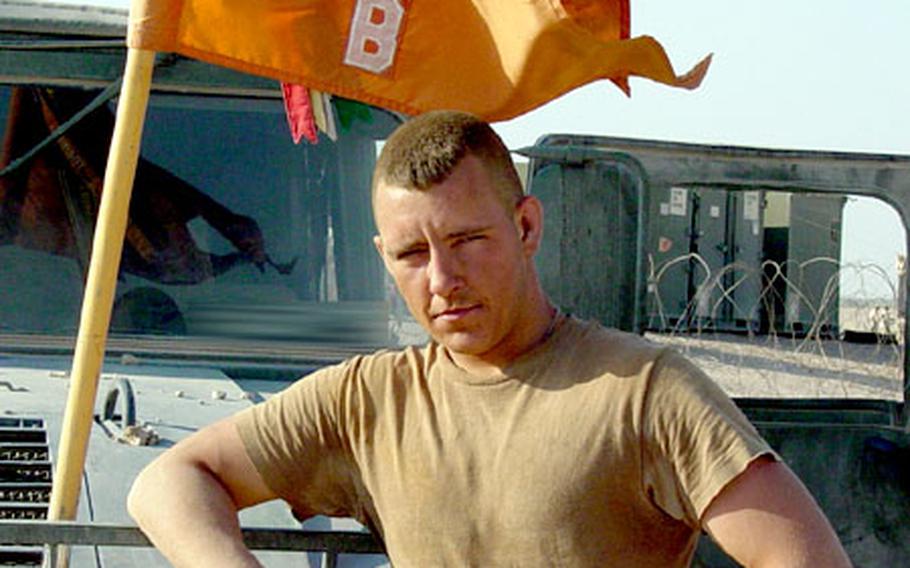 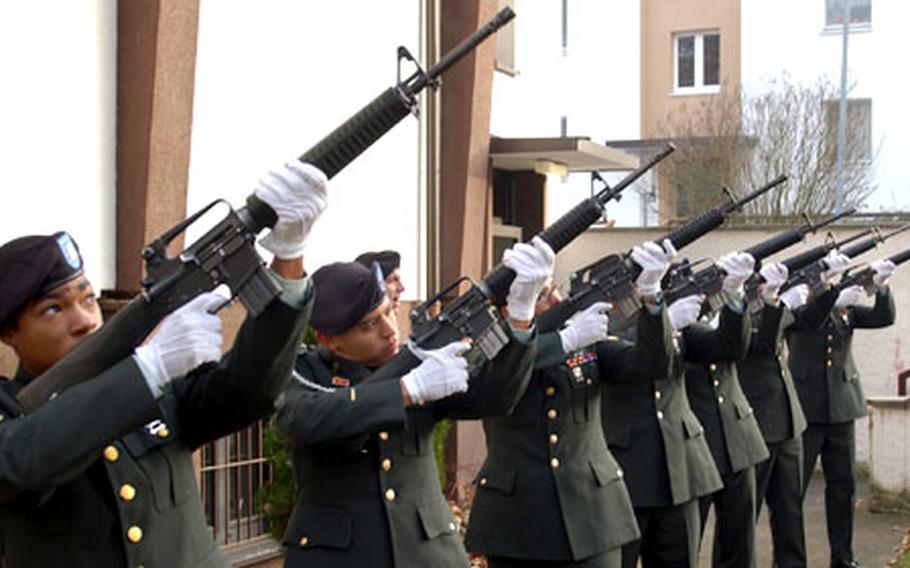 An honor guard fires a volley for Spc. Arron R. Clark at a memorial service in Darmstadt, Germany, on Thursday. (Michael Abrams / S&S) DARMSTADT, Germany &#8212; The Community Chapel was filled Thursday with mourners, even though most of them did not even know Spc. Arron R. Clark.

Clark, a member of Company B, 440th Signal Battalion, was killed Dec. 5 in Baghdad when a bomb exploded in his convoy of vehicles. Some knew him personally but many did not, according to his friend, Staff Sgt. Chadwick Hamilton.

Hamilton said the mourners came to Clark&#8217;s memorial service to pay respect to a soldier, draw strength from one another and pray.

Soldiers in dress uniform worked as ushers. They greeted the civilians and Clark&#8217;s fellow soldiers who wore their green and brown battle dress uniforms. Piano music played softly as the church slowly filled.

When the memorial service started at 10 a.m. all the pews were filled with soldiers sitting shoulder to shoulder. There were maybe 250 people in all. Sniffles could be heard above the music.

Clark, 20, joined the Army on March 26, 2001. He went to Fort Leonard Wood, Mo., to learn to be a nuclear, biological and chemical specialist. He was sent to Darmstadt in fall 2001. It was his first duty station.

Clark came to know Hamilton while working out at the gym at Cambrai-Fritsch Casern. Hamilton said Clark was eager tomove up in te service. He wanted to do a good job and please people. Clark had his sights set on joining airborne, Special Forces or Rangers.

Clark and Hamilton were deployed to Kuwait in March. Clark was chosen out of 135 people to be the unit commander&#8217;s driver.

Chaplain (Capt.) Luis A. Ruiz said Clark mourned the loss of his grandmother while he was in Iraq.

&#8220;He believed in God and talked about strengthening his relationship with the Lord,&#8221; Ruiz said.

The service lasted 30 minutes. When it was over, mourners stood up one pew at a time and filed out. Some of the faces looked empty and sad. There were some tear-stained eyes. Other soldiers looked focused.

Clark&#8217;s body was still at Landstuhl Regional Medical Center on Thursday. According to a spokeswoman for the 21st Theater Support Command, he was to be flown to the United States on Friday.

Clark was born and raised in the northern California town of Chico. He is survived by his parents, James Allen and Tamela Lynn Clark, and his two brothers, Dwayne and James. He would have turned 21 on Jan. 27.