Darmstadt clinic is caught up in baby boom 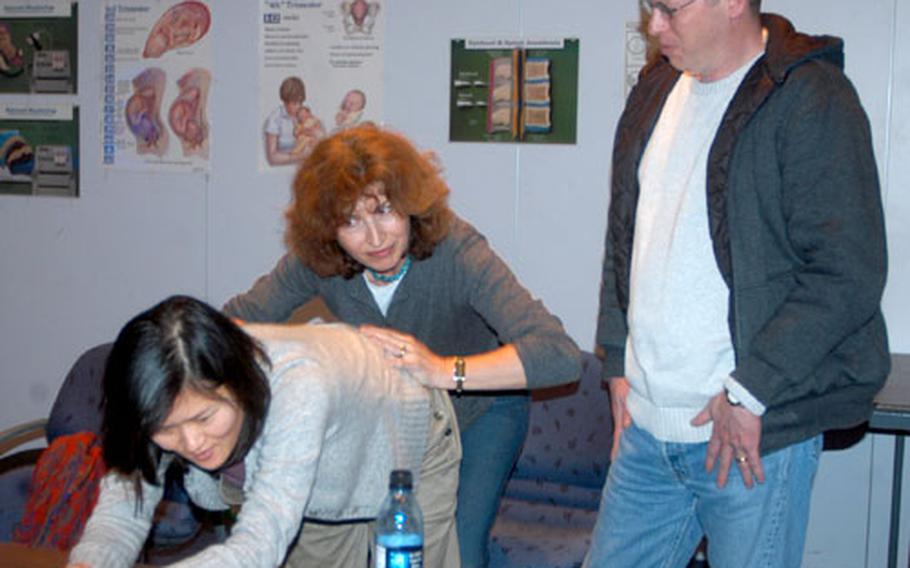 DARMSTADT, Germany &#8212; There&#8217;s a baby boom in the 233rd Base Support Battalion and the mother of all nurses is preparing new families for what to expect when they&#8217;re expecting.

Kristi Groves, the new obstetrics and gynecology nurse for the Darmstadt Medical Clinic, took on the role in the community earlier this month to mainly help new mamas and papas.

Previously, pregnant women in the community would have to travel to the U.S. Army Hospital in Heidelberg or would have to be seen off post, she said. But the boom, which is attributed to Rest and Recuperation leave and troops returning from Iraq, created the need to get an OBGYN nurse at the clinic, she said.

Just within the past couple of months there has been about 80 new babies born or conceived, Groves said, and with the upcoming deployments she suspects the numbers will keep growing.

Groves, who has been working at the Darmstadt clinic for two years, now uses her new position to offer a wide variety of medical and community services to help people who are new parents understand what their life will be like after nine months.

At the onset of the pregnancy, Groves offers a four-hour class introducing community programs that new families can use. Isssues such as the Women, Infants, and Children program; Tricare; Child and Youth Services; as well as pregnancy and child-raising-specific courses are introduced in her class.

One of the programs Groves encourages new parents to attend is the &#8220;Preparing for Your Amazing Newborn&#8221; class.

The class is new to the community and taught over a two-day period at the Army Community Service center. Parents are taught the different stages of labor, how to reach a comfort point while in labor, what to expect after labor, and beginning tips on caring for a newborn.

The class alternates between the Darmstadt and Babenhausen ACS and is taught by two instructors, Andreina Howard and Kristy Kittinger, who also make house calls after the baby is born. Both the instructors are mothers, as well as registered nurses, and they say the new parents like having someone to depend on, as well as teach tricks of the trade.

During the class, there are props, videos, demonstrations, and soon there will be a &#8220;sympathy belly,&#8221; for fathers to wear and get an idea of the magnitude of pregnancy. &#8220;I feel education is the most important aspect of a pregnancy. When you know what you&#8217;re going into, what things to ask for, you have a better labor experience,&#8221; said Kittinger at one of the classes at the Darmstadt ACS earlier this month.