Sgt. Jeremy Bell, of the 3rd Platoon of the 15th Engineer Company, uses an acetylene torch to set fire to brush along a roadway in Iraq during a recent route sanitation mission near Muqdadiya in north central Iraq. The missions are intended to remove debris that can be used to hide gunment or explosives along roadways. (Monte Morin / S&S)

Sgt. Jeremy Bell, of the 3rd Platoon of the 15th Engineer Company, uses an acetylene torch to set fire to brush along a roadway in Iraq during a recent route sanitation mission near Muqdadiya in north central Iraq. The missions are intended to remove debris that can be used to hide gunment or explosives along roadways. (Monte Morin / S&S) 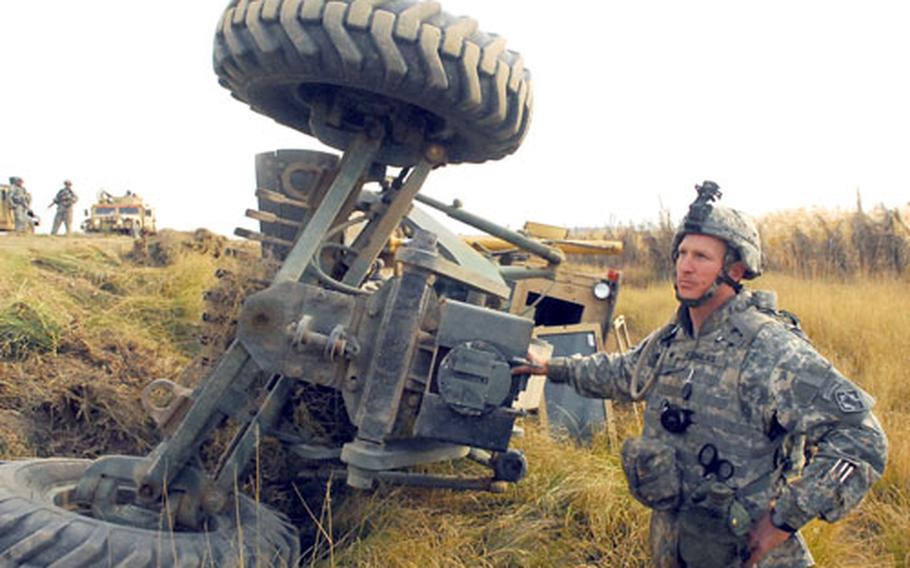 Spc. David Flowers stands beside an upturned road grader moments after he tumbled down an embankment inside the piece of heavy equipment during a route sanitation mission near Muqdadiya. (Monte Morin / S&S) 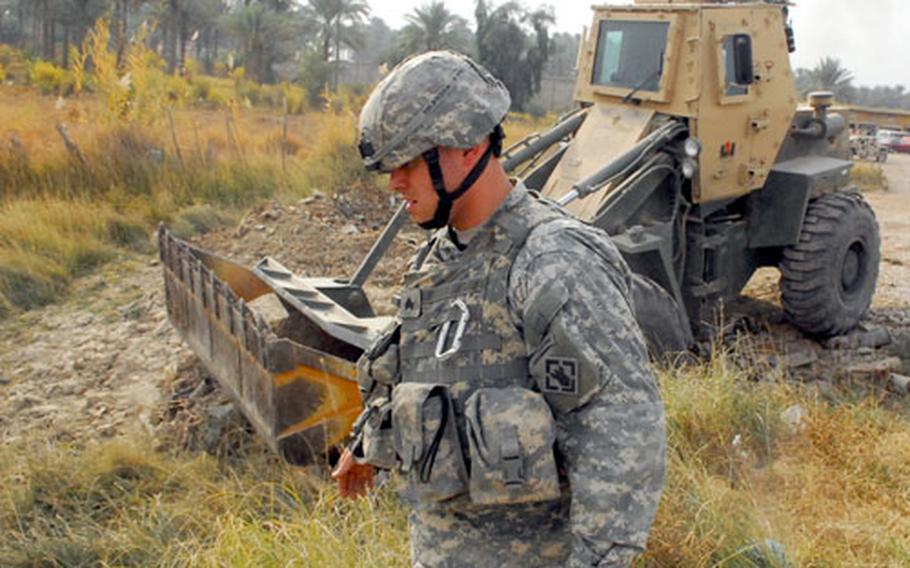 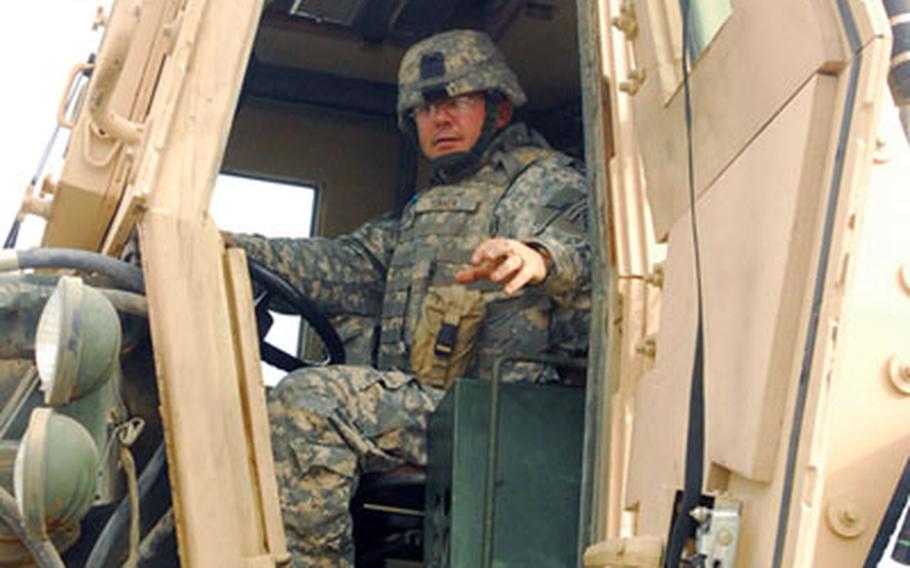 Sgt. David Turner of the 15th Engineer Company sits at the controls of a bucket loader. (Monte Morin / S&S)

For the past four months, Flowers and fellow members of the 15th Engineer Company have focused their construction and demolition skills on a tattered collection of roads in north-central Iraq.

Armed with a collection of bulldozers, bucket loaders, road graders, ground compactors and cement-mixing equipment, the company&#8217;s main mission has been to repair roadside bomb craters and clear roadway shoulders of debris and vegetation that can hide insurgent gunmen or explosives.

The engineers also hope that their handiwork will promote good will among local Iraqis.

The road work has taken the 15th Engineers into cities and pastures throughout Diyala province, one of northern Iraq&#8217;s more restive areas. They have encountered roadside bombs, snipers and small-arms attacks.

Recently, a 3rd Platoon engineer was wounded when a sniper hidden in tall grass shot him through the thigh. The bullet passed through the sleeve of Sgt. Lawrence Davidson, 26, of Syracuse, N.Y., who was standing beside the wounded soldier.

The gunman was caught and is to face trial soon, a development that pleases soldiers in the unit.

The 15th Engineers are attached to the Fort Knox, Ky.-based 19th Engineer Battalion, which falls under the 25th Infantry Division&#8217;s Task Force Lightning. While most of the battalion is based at Contingency Operating Base Speicher, near Tikrit, the 15th is quartered at LSA Anaconda.

The work is difficult for both the soldiers and their machines, because much of the equipment has been used by previous units for the last three years. The wear and tear has led to frequent breakdowns.

During a mission Thursday, Gentry and his platoon traveled to the outskirts of Muqdadiya to clear the shoulders of a rural road that bordered a deep canal.

Overall, engineers said the mission was far quieter than one a week earlier in downtown Baqouba. On that day, at least two insurgents fired at the engineers and Iraqi personnel at the job site.

Lollis said he was sitting in a Humvee when a gunman opened fire on an Iraqi police officer and an Iraqi army engineer who was operating an unarmored bucket loader at the site.

The engineers returned fire, hitting the gunman. As Lollis ran from his Humvee to treat the wounded Iraqi policeman, who had been hit in the upper thigh, a second gunman opened fire.

Lollis treated the police officer, then went in search of the operator of the bucket loader, who had suffered facial wounds when an insurgent&#8217;s bullet shattered the bucket loader&#8217;s windshield. Lollis found him taking cover behind a 5-ton truck and treated him.

Despite such episodes, some engineers said they were happy to be working on Iraq&#8217;s roadways.

Turner, who is on his third deployment to Iraq, said the work he&#8217;s doing now seems more dangerous than when he operated heavy equipment for the 3rd Infantry Division on its push into Baghdad during the invasion in 2003.

As Turner spoke, he scanned the horizons of the rural area in which his platoon was working. He said he was happy to see a detail of 1st Cavalry Division soldiers patrolling the area.

Engineers face danger from their own equipment, too

Spc. David Flowers of the 15th Engineer Company was powering a massive, 17-ton armored grader down a narrow, rural road on the outskirts of Muqdadiya when the machine began slipping down a steep embankment.

As Flowers braced himself for the impact, the machine slowly tipped sideways, then toppled into a thicket of dusty brush.

The operator&#8217;s cab had barely touched the ground before his fellow 3rd Platoon soldiers were at the scene and unscrewing the bolts that secured the grader&#8217;s bulletproof windshield.

Flowers jettisoned the windshield with a swift kick and climbed out, unscathed.

The accident occurred Thursday during one of the 15th Engineer&#8217;s routine &#8220;route sanitation&#8221; missions in north-central Iraq. The missions are aimed at clearing debris and vegetation from the shoulders of local roads in order to improve visibility and prevent insurgents from hiding gunmen or explosives there.

Thursday&#8217;s mission posed a particular challenge to engineers because it was bordered by a deep canal on one side and a steep embankment on the other.

When it comes to mishaps like the grader rollover, Flowers said the operator had to be upbeat. In this case, he said he was glad the grader hadn&#8217;t toppled on the opposite side of the road and into the canal. He was also thankful that the machine hadn&#8217;t tumbled onto a roadside bomb.