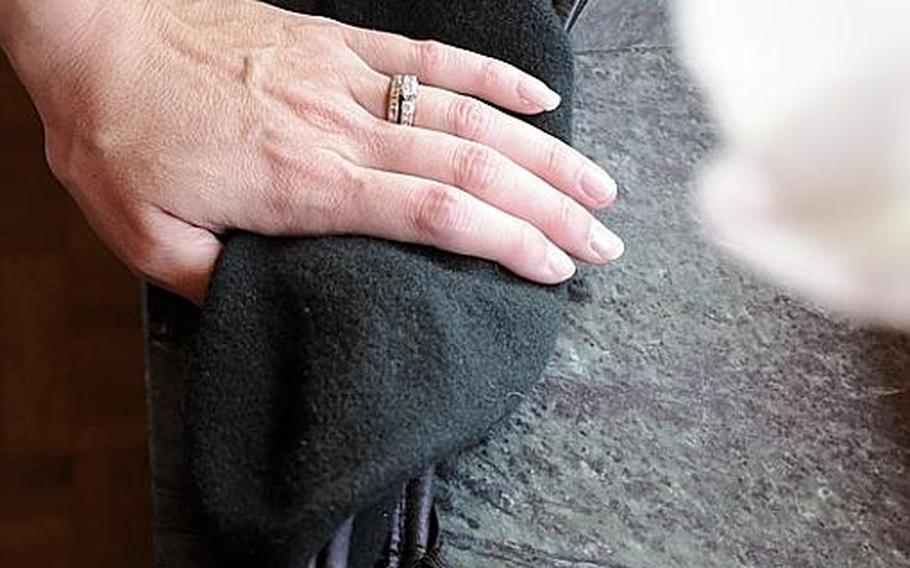 Buy Photo
While gazing out a window, Meredith holds the Green Beret of her husband Brandon who is in 1st Battalion, 10th Special Forces Group stationed in Stuttgart. She is also manager for the unit's Family Readiness Group where she helps other Special Forces family members deal with the turmoil inherent to being part of Special Forces. (Warren Peace/Stars and Stripes)

STUTTGART, Germany &mdash; Rob was having lunch with his wife, Lauren, and friends at California Pizza Kitchen, when his phone rang.

After a short conversation, the SEAL with Naval Special Warfare Unit 2 immediately left the restaurant and didn&rsquo;t see his wife again until he returned from a mission a few months later.

That was several years ago, and she still doesn&rsquo;t know where he went or what he did.

&ldquo;It was almost cheesier than the movies,&rdquo; said Rob, whose last name is being withheld by Stars and Stripes for security reasons. &ldquo;I got the call at lunch and was gone before dinner.&rdquo;

However, those no-notice deployments are pretty rare.

That could change, with news that senior officials at the White House and in Congress are considering a new special operations-led model as the way ahead in Afghanistan.

Special operations forces, which make up less than two percent of the U.S. military forces, tackle missions with a higher level of security. The details surrounding the killing of Osama bin Laden by SEAL Team Six, for example, might never be fully disclosed. Those missions, and the high secrecy that envelop them, affect not only the servicemembers but also loved ones, who are left behind with little information.

The families of all troop operations live with fear, craving every crumb of information they can find about their deployed servicemembers, whether through military channels, Facebook, email or other outlets. Special operations families get less information.

For special operations forces, ranging from Army Special Forces and Rangers to Marine Force Recon to Air Force Pararescue to Navy SEALs, there are no public welcome home ceremonies, no crowds to sing their praises. Even if their missions, such as the raid in which bin Laden was killed, become public, the troops and their families remain anonymous.

Since most of those in special operations forces are recruited from within the services, the average member is older and has a larger family unit than those in other military occupations, according to Special Operations Command Europe commander Maj. Gen. Michael S. Repass.

Family stress can be such a force, Repass said, that he warns married servicemembers not to make the decision to join the special operations forces selfishly.

Many special operation forces families have adapted and learned to deal with these limitations, but they are not alone.

&ldquo;I have never had such a good group of girlfriends as I do now,&rdquo; said Rob&rsquo;s wife, Lauren. The couple has two children.

&ldquo;We are all going through the same thing, and you don&rsquo;t have to talk about the details,&rdquo; said Meredith, whose husband, Brandon, is a Green Beret from the Army&rsquo;s 1st Battalion, 10th Special Forces Group.&ldquo;&rdquo;I can just call a friend and say, &lsquo;&rsquo;I&rsquo;m having a sad day,&rsquo; and she says, &rsquo;OK. Let&rsquo;s cry,&rsquo; and you don&rsquo;t have to talk about what you&rsquo;re crying about. You just cry.&rdquo;

Many wives worry about what happens during extreme missions, and how it might affect their mates.

&ldquo;There is a lot of information and preparation for cases, such as injury or death, but there is not any way to prepare for each individual&rsquo;s frame of mind when they return. Thankfully, we have been blessed with good re-integrations and have seemed to jump right back in where we left off.&rdquo;