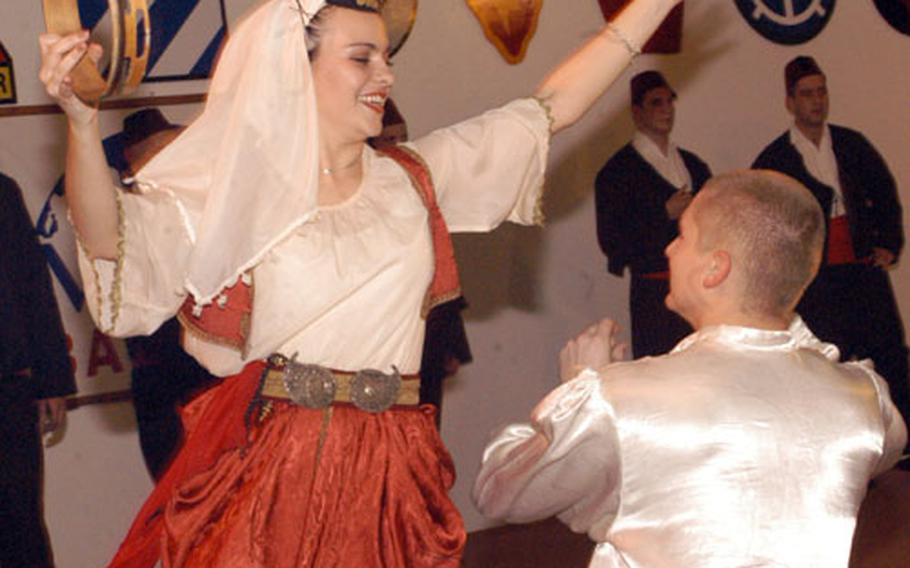 EAGLE BASE, Bosnia and Herzegovina &#8212; 1st Lt. Charles Moore passed up an evening of reading for a chance to learn something about Bosnian traditions from a troupe of folklore dancers and musicians.

And the time was well worth it.

Dancers in traditional costumes twirled and sang as the band played. During breaks for costume changes, band members played traditional tunes on accordions, violin, guitar and flute. A singer joined in on several numbers.

The 32-member Bosna troupe presented ethnic dances and music from throughout the region.

The performers started with a dance of the Bosnian Muslims, then changed costumes and performed a Croat dance. Next they demonstrated a bit of Hungarian tradition that spilled over into the local culture, followed with a Macedonian dance and finished with a courting dance of Bosnian Muslims. Each time they changed into corresponding traditional costumes.

&#8220;It&#8217;s just another way for us to have the opportunity to bring people together through culture,&#8221; said Marcus Wheeler of the Morale, Welfare and Recreation program, which brought the dancers.

This rotation of troops may get another chance to see the performance before they return home in March, Wheeler said.

Obermoller, who loved the colorful costumes, hopes she gets to see the performance again. &#8220;I forgot my camera today, so I have to bring it next time,&#8221; she said.

The audience awarded the performance, which ran almost two hours, with a standing ovation, clapping and whistling.