Dancers get into a groove at Würzburg workshop 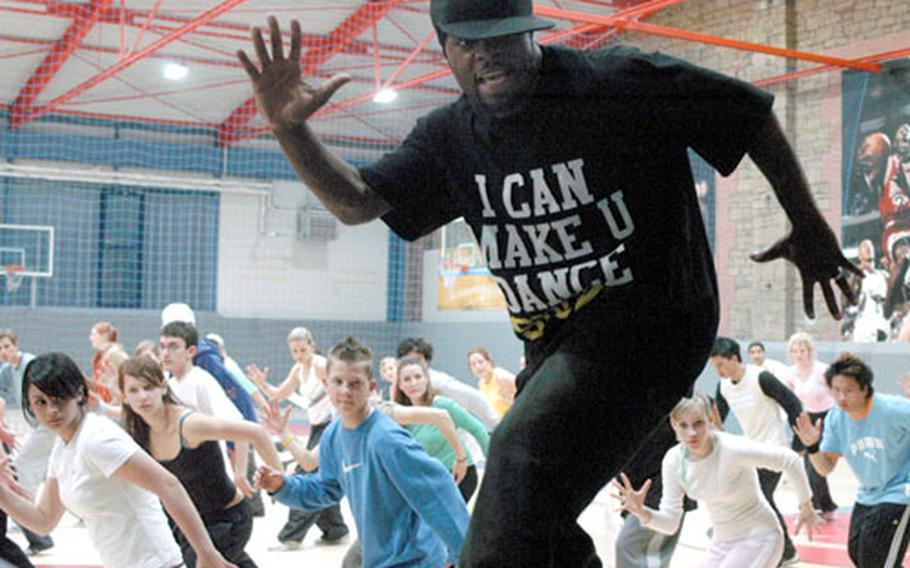 Choreographer Roland “Ro-Ro” Tabor leads a group of dancers through one of the routines he’s used with artists such as Usher, Aaliyah and Omarion on Thursday in Würzburg, Germany. To come up with his moves, Tabor said he doesn’t even try to come up with steps the first day he hears a piece of music — he memorizes the song first. (Ben Murray / S&S)

W&#252;RZBURG, Germany &#8212; Many of the 60 aspiring dancers crowded into a W&#252;rzburg gym Thursday came to learn how to move and groove like hip-hop and pop icons Usher, Missy Elliot and Justin Timberlake.

Tabor was one of a pair of high-powered choreographers at this week&#8217;s W&#252;rzburg workshop, one of nine held around Germany in April where students have been learning some of the intricate dance moves seen in popular music videos.

Open to anyone interested &#8212; German, American, young and old, male or female &#8212; the sessions with the choreographers move fast: Each of the three dance instructors gets about an hour to teach the crowd a comprehensive routine.

On a stage in the gym Thursday, Tabor went through the typical instruction method, counting out the timing of when to turn, when to hop to the side, when to crouch down and spin. Repeating it just four or five times, he then set it to music, called for the crowd to follow a couple of times for practice, then moved into another dizzying set of minute body changes and subtle hitches that make up the routine.

Repeat, practice and move on, and in just 45 minutes he had the crowd performing part of one of the professional routines he&#8217;s used with performers such as Omarion, Aaliyah and Mary J. Blige.

The touring workshop, which also has a Sunday session &#8212; already full &#8212; near the U.S. military community in Stuttgart, allows dancers to work with prolific choreographers in the business.

Tabor&#8217;s next project, for instance, is to choreograph singer Omarion&#8217;s upcoming tour, while Eddie Morales, who taught the last session at Thursday&#8217;s workshop, will choreograph Mariah Carey&#8217;s summer concert tour.

In addition to teaching dance steps, the instructors also shared their stories about breaking into the dance business. Tabor tells of how he got his break by stopping Hammer in a hotel lobby and dancing for him, and Morales talks about how he turned from baseball to dance after getting hit by a bus in Brooklyn.

In giving advice to young dancers who want to get started in the business, both choreographers stressed creativity &#8212; copying moves seen on MTV will get you nowhere, they said. And it helps to be confident, Tabor said.

Dancers at the workshops get the chance to do just that: at the end of each session, workshop producers pick some of the best and videotape their moves, scouting for possible future talent.

&#8220;Who Got Skillz?&#8221; organizer Mucho Tokic said that the next series of lessons will start in June with new choreographers.