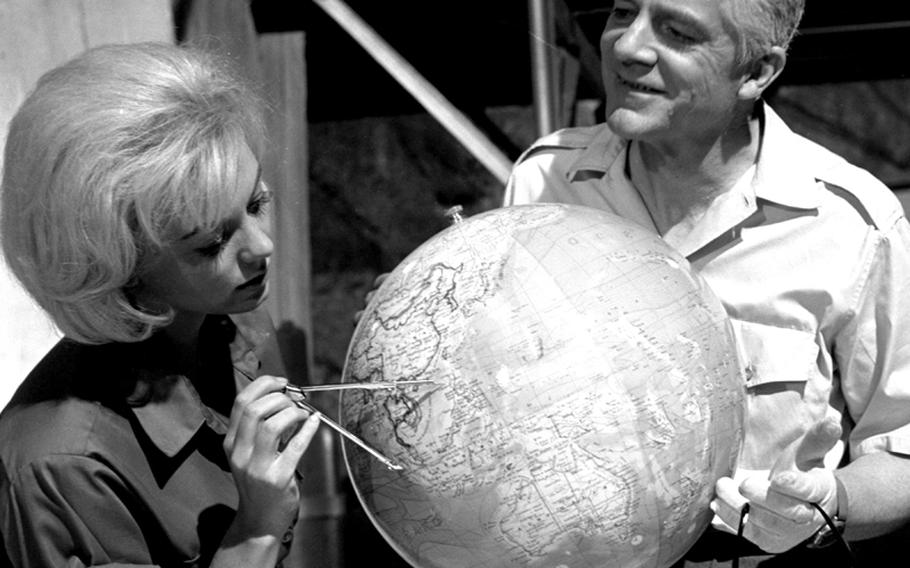 Buy Photo
Dana Andrews and his co-star, Janette Scott, on the set of his latest film, ''Crack in the World,'' in Spain in 1964. (Red Grandy/Stars and Stripes)

MADRID &mdash; The Russians seem to make it a practice to invent things long after somebody else has received credit for the idea, but Dana Andrews feels they may be getting ahead of him this time.

Andrews is in Madrid to star in a "semi-science fiction" picture titled "Crack in the World" that concerns a project to tap the energy bubbling around in the center of the earth.

"After we started the film, I read in the New York Times that the Russians have had just such a project going on for some time," he said.

It is to be hoped the Russians don't have quite such a tricky time of it as Andrews and his hearty band are experiencing on the set. The story concerns scientists who crack the crust of the earth with a nuclear blast only to discover the crack won't stop.

Appearing in the picture with Andrews are Jannette Scott, who must survive not only the picture. but the reputation of being the former "British Shirley Temple," and Kieron Moore, a handsome actor who yearns for Miss Scott despite the fact that she is married to Andrews.

Bundy Marton, who recently received excellent reviews for "The Thin Red Line," is directing the picture that is being produced by Lester Sanson for Phil Yordan's Security Pictures.

"Much of the action takes place in a command post supposedly three miles down in Tanganyika," Andrews explained amid the clutter of equipment on the set. "We call it semi-science fiction because it is believable."

Andrews, a veteran of the Hollywood wars, isn't afraid to try something new in a role, but he is well aware of the risks involved. "I was with Sam Goldwyn for 11 years, and he said that anybody who thinks he can predict what the public will like is a fool."

Nor does he feel "the good old days" could be revived. "People see 'Laura' on TV now and tell me how well it stands up, but they don't consider the nostalgia involved. I doubt if you could get 'Laura' made today."

But whatever pictures are made, Andrews feels they still have a tremendous advantage over the offerings of the box in the living room.

"The horrible thing about TV is they don't have to depend upon the money earned by the show. At the top rate of TV budgets, a feature length film would cost only $225,000, and you can imagine what a picture you would make for that. Time is required for creation, and it's amazing TV is as good as it is."

Andrews also feels his concern may be wasted. "People have an emotional reaction to TV. but they don't think about what they're seeing," he said.