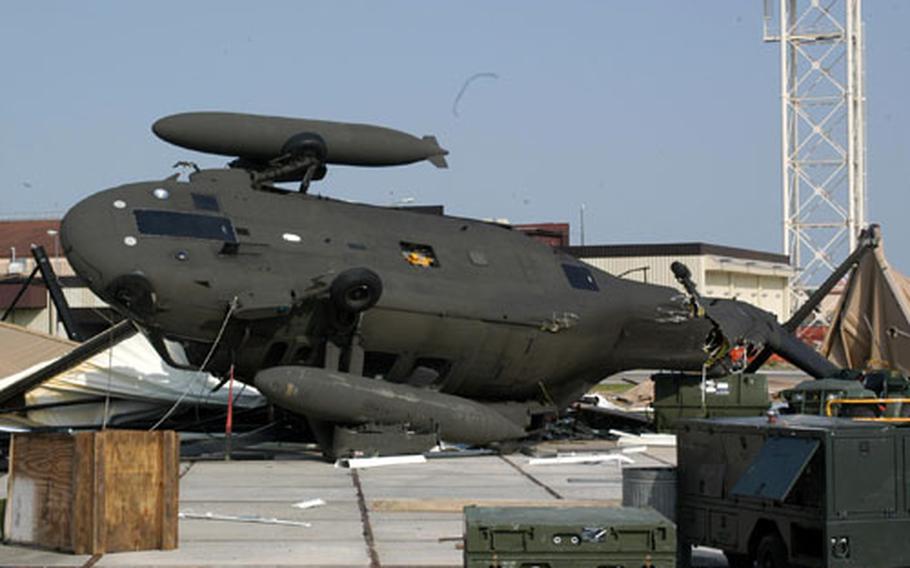 This Black Hawk helicopter assigned to Company B, 5th Battalion, 159th Aviation Regiment was flipped when the clamshell structure it was housed in at Aviano Air Base was destroyed by strong winds during a storm in late June. The damage to the helicopter could reach $1.8 million. (Kent Harris / S&S)

AVIANO AIR BASE, Italy &#8211; The freak storm that wreaked havoc on Aviano Air Base in June left the Army and Air Force with some big repair bills.

According to figures released by the Army, the damage to a Black Hawk helicopter that was flipped over by high winds will reach $1.8 million.

The Air Force has paid a similar amount to repair damage to the rest of the installation. That total is more than $1.65 million, according to Tech. Sgt. Jerome Baysmore of the 31st Fighter Wing public affairs office.

Army Maj. Allen Hing, the public affairs officer for the 21st Theater Support Group who provided the repair estimate for the Black Hawk, said experts traveled to Aviano from Germany to examine helicopter and determined it could be repaired in theater. It&#8217;s undergoing work at Coleman Barracks in Mannheim, Germany.

The Army helicopter unit stationed at Aviano, recently renamed to Company G, 52nd Aviation Regiment, eventually will get another copter. It hasn&#8217;t been determined if it will be the one being repaired.

The Air Force repairs include removing asbestos from the Health and Wellness Center and replacing the roof, which was heavily damaged by the storm. Contractors are scheduled to finish in March, Baysmore said.

Critical leaks in roofs around base have been fixed, Baysmore added, with the replacement of shingles and more cosmetic repairs to continue until February.

He said the 31st Civil Engineer Squadron has spent almost $1.3 million on repairs, with an additional $361,000 going to private contracts.

The base has also purchased 100 trees to be planted in various locations to replace those knocked down during the storm.

Many local residents said they had never seen anything like the storm, a mix of hurricane-force winds and rain that swept through the base and the surrounding countryside on June 29