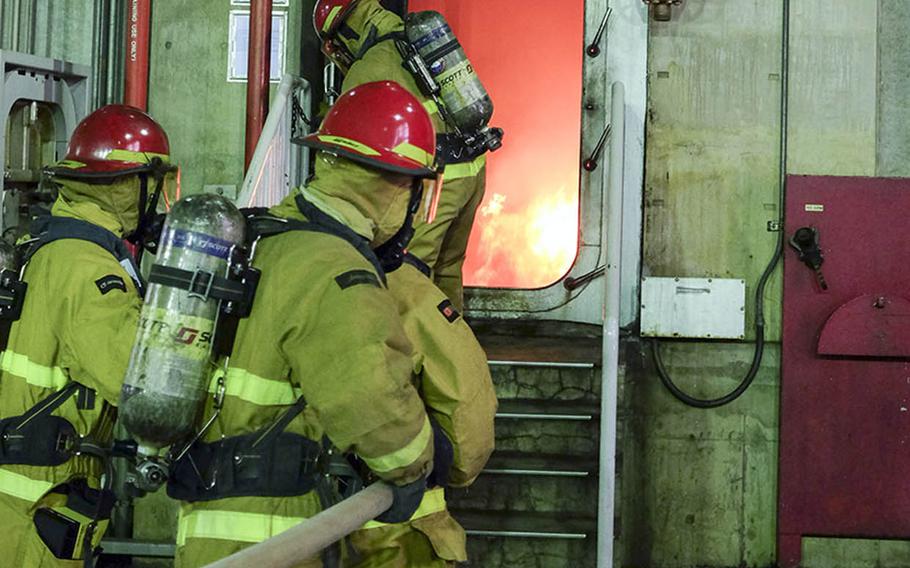 Sailors prepare a hose to extinguish a fire during recent damage-control training at Yokosuka Naval Base, Japan. (Tyler Hlavac/Stars and Stripes)

Sailors prepare a hose to extinguish a fire during recent damage-control training at Yokosuka Naval Base, Japan. (Tyler Hlavac/Stars and Stripes) Sailors gear up ahead of recent damage-control training at Yokosuka Naval Base, Japan. (Tyler Hlavac/Stars and Stripes) 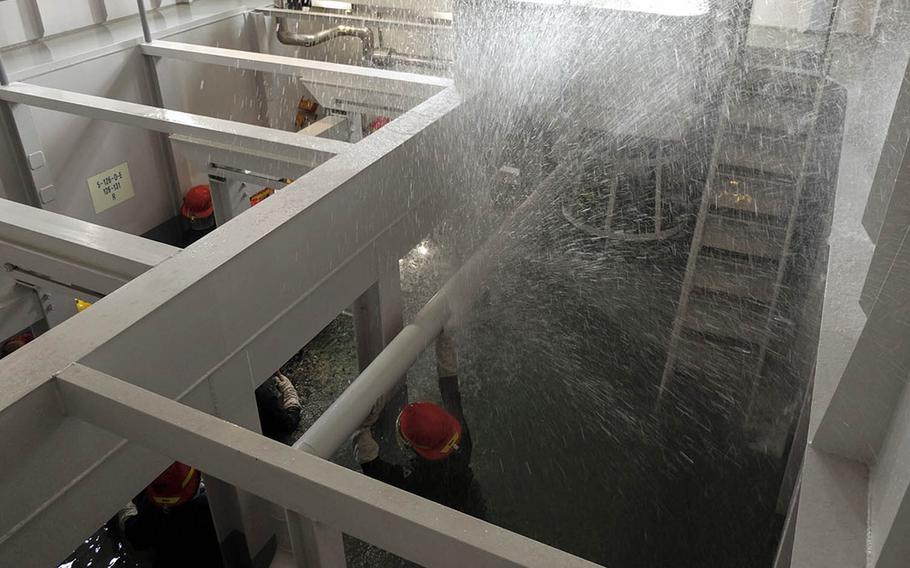 Sailors deal with a ruptured water pipe during recent damage-control training at Yokosuka Naval Base, Japan. (Tyler Hlavac/Stars and Stripes) 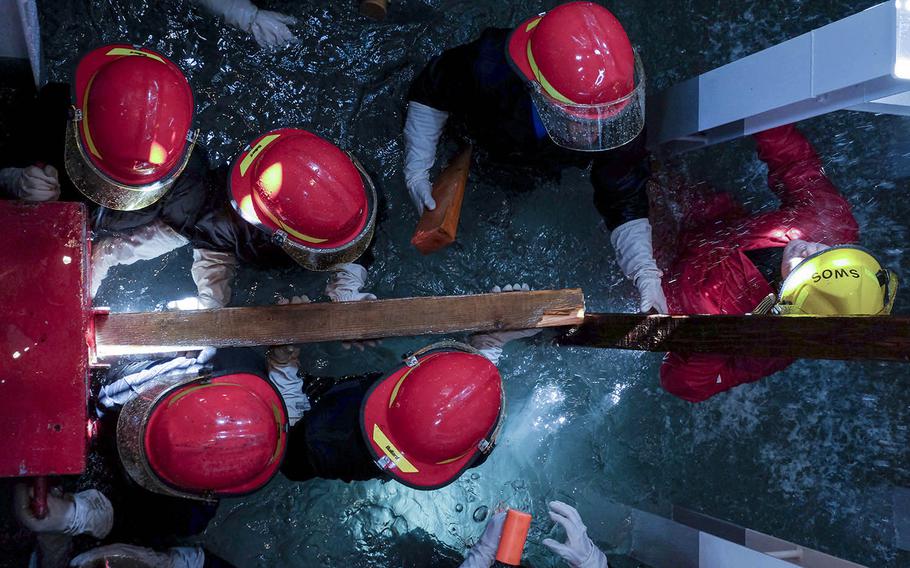 Sailors attempt to shore up a damaged bulkhead during recent damage-control training at Yokosuka Naval Base, Japan. (Tyler Hlavac/Stars and Stripes)

YOKOSUKA NAVAL BASE, Japan — There’s been a sense of gravity about training at the 7th Fleet’s damage-control school since a pair of deadly warship collisions that claimed 17 sailors’ lives last year.

Recent accidents involving 7th Fleet ships — the USS John S. McCain and USS Fitzgerald — are still raw in the minds of instructors and students who are paying serious attention to damage control these days, according to instructors.

“Students that come through our classes here after [the collisions], their attention is a lot better, the motivation is there,” said Chief Petty Officer Reginald Pridgen, a damage controlman who teaches at the school. “A lot of students here had friends that may have been on those ships and were able to get some feedback on what it was like.”

An inquiry into the Fitzgerald accident detailed efforts to save the ship from flooding after it struck a container ship off the coast of Japan last June. The crew “fought hard in the dark of night to save their ship. Ultimately, those damage control efforts and restoration processes succeeded in safely bringing Fitzgerald into port under her own power,” Rear Adm. C.F. Williams said in a report released in August.

The Fitzgerald sailors used training they got at Yokosuka to save their ship, Pridgen said.

“You can’t call the fire department when you’re out at sea floating in the middle of the ocean,” said Petty Officer 1st Class Chad Marney, a boatswain’s mate who participated in fire-fighting training at the school last month. “Everyone aboard ship has got to be knowledgeable in damage control.”

Marney has firsthand experience with the things the school teaches sailors to deal with.

“I was on board the John S. McCain and went through all of that,” he said of the destroyer’s collision with an oil tanker near Singapore last August. “Everyone across the board has to be on the same page and [damage control] has got to be number one.”

The school puts sailors in the sort of scenarios they could face during an emergency at sea with an emphasis on teamwork, organization and communication, Pridgen said.

“If they have those three things they should be able to work together to get the best of any damage-control situation,” he said.

During the training, groups of more than 20 sailors gear up and practice fighting fires and dealing with hull-ruptures — the sort of things sailors could face in combat or after accidents at sea.

“It’s a simulation of [what might happen] if your ship was to run aground, take a missile or collide and you have a massive amount of water coming inside the skin of the ship,” said Chief Petty Officer Walter Dailey, a damage controlman who supervised flood-control training at the school Thursday.

Sailors struggled with gushing water, slogged through waist-deep water, patched a hole and shored up a damaged bulkhead.

Petty Officer 3rd Class Makayla Medrano, a damage controlman from the USS Ronald Reagan aircraft carrier, said the water was up to her shoulders, and that the noise of more water rushing in hampered sailors’ efforts.

“It’s hard to communicate, it’s really loud,” she said. “Pipe ruptures are easy but bulk ruptures put you on a time crunch.”

Despite the challenges, the sailors stuck with their training and the damage controlman’s motto: “Don’t give up the ship.”