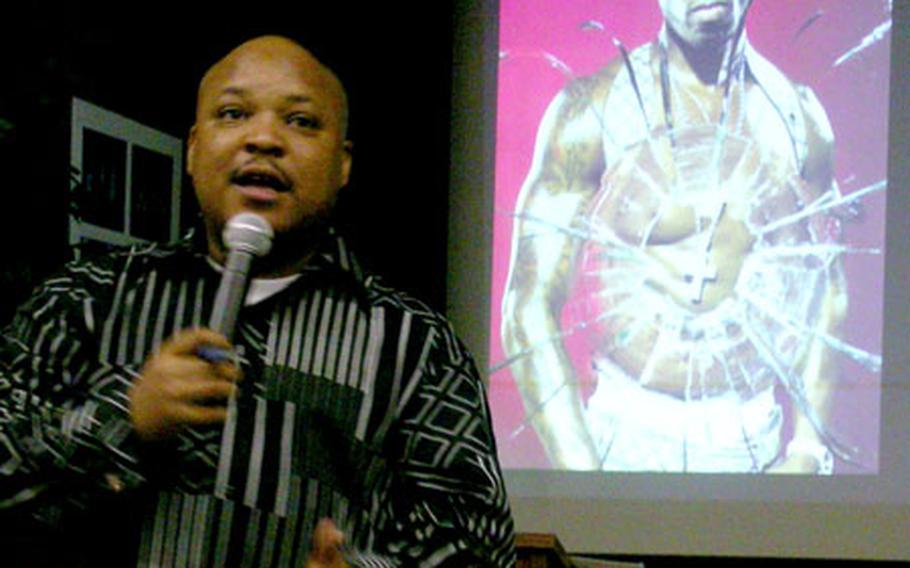 Elder G. Craige Lewis, who visited Yokota Air Base and Yokosuka Naval Base over the weekend, spoke to an audience to deliver “The Truth About Hip-Hop,” a presentation linking hip-hop culture to Satan. (Allison Batdorff / S&S)

Hip-hop music has devilish intent, he told audiences at Yokosuka Naval Base and Yokota Air Base last weekend.

&#8220;The devil has a plan to deceive this country through music,&#8221; Lewis told the 60 people at Yokosuka&#8217;s Little Theater on Sunday. &#8220;It started with heavy metal, but that only attracted a demographic of white, suburban kids. Hip-hop has global appeal. It&#8217;s an entire culture of clothes, music and lifestyle. You listen to the music while the lyrics promote killing, drugs, sex, crime, idolatry and violence.&#8221;

However, some, like Airmen Recruits Lisa Solan and Marissa Shafer-Barnes, don&#8217;t think there&#8217;s anything wrong with hip-hop.

People need to be responsible and shouldn&#8217;t blame music for their actions, Shafer-Barnes said.

The Dallas-based Lewis started preaching his anti-hip-hop message after what he said was a vision from God in 1990. His Web site boasts 1 million hip-hop CDs destroyed worldwide.

On its Web site, the Holy Hip Hop Church calls Lewis&#8217; position &#8220;a dangerous lie&#8221; that drives youth away from the church rather than toward it. The church needs to speak the language of the people, the Web site says. &#8220;Holy&#8221; hip-hop can re-connect the church with the youth and community, it adds.

He called on parents to destroy their hip-hop CDs and posters and to &#8220;tighten things up&#8221; for their kids.