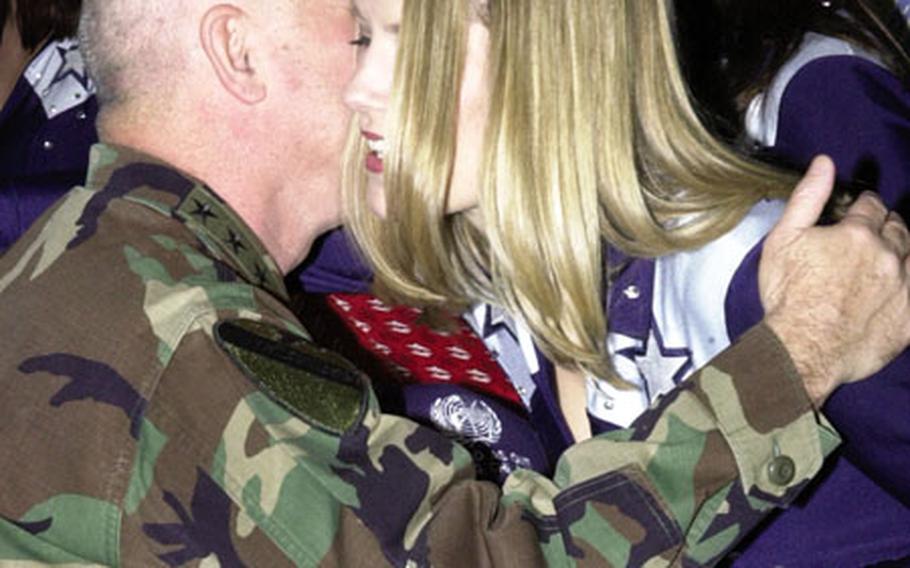 YONGSAN GARRISON, South Korea &#8212; Despite a miserable season on the field, the Dallas Cowboys may have gained a few new fans this week.

Dressed in form-fitting bodysuits, the cheerleaders roamed the post exchange after stopping by the office of Gen. Leon J. LaPorte, USFK commander, earlier in the morning.

The cheerleaders made it to camps Bonifas, Greaves, Giant, Garry Owen, Essayons, Stanton, Kyle, Edwards, Casey and Howze, said Capt. Dan Gruber of 17th Aviation, who was helping escort the group. They also tried to visit a few groups of soldiers stationed on some of South Korea&#8217;s high mountains, but weather prevented one visit, he said.

Spc. Brian Robinson was lucky enough to be on one of the Black Hawk flight crews that flew the cheerleaders around. Robinson was collecting some autographs at the post exchange and also buying a stick of deodorant.

Sgt. Rebecca Steinfeld got a few autographs, a gift for her husband, Matthew, who came from Fort Lewis, Wash., to visit her for the holidays.

Spc. Ricky Slavens and Cpl. Nigel Lindsay both were doing courtesy patrol checks near the Townhouse eatery Thursday morning but managed to sneak away for a few minutes to the exchange.

The Dallas Cowboys cheerleaders swing through Japan this week for shows, autograph signings and clinics.

At Iwakuni Marine Corps Air Station, the cheerleaders will hold a clinic on Tuesday at 9 a.m. in the main gym. A show for all ranks starts at 7 that evening, also in the main gym.

The cheerleaders head to Yokosuka Naval Base on Friday, where they&#8217;ll sign autographs at 11 a.m. and eat lunch at the U.S. Navy Hospital galley.

A youth cheerleading clinic will be held at 2 p.m. at Thew Gym. Spectators are welcome. That night, the Dallas cheerleaders will perform at 6 for all ranks in Thew Gym.