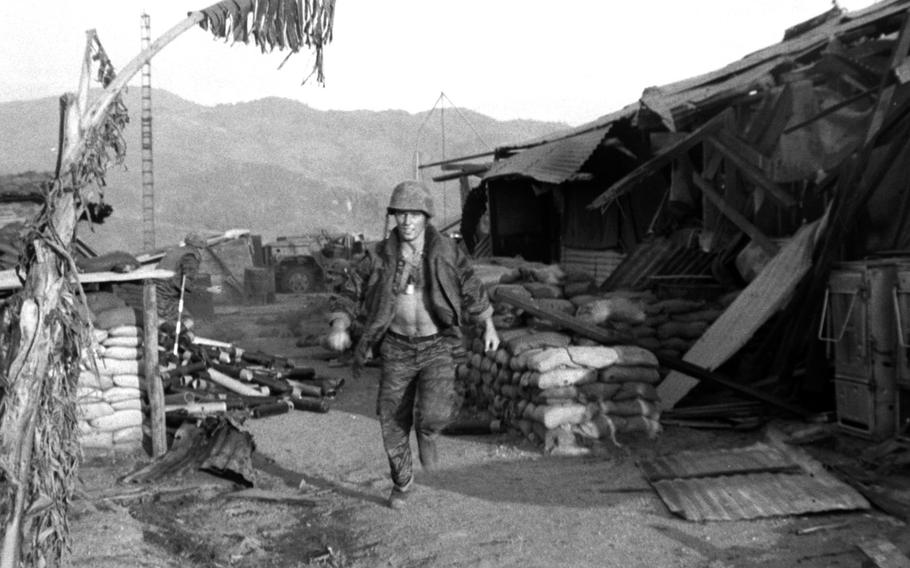 Buy Photo
When out in the open, the best policy at the beleaguered Dak Seang camp in April, 1970 was to move quickly. (John Beard/Stars and Stripes)

Buy Photo
When out in the open, the best policy at the beleaguered Dak Seang camp in April, 1970 was to move quickly. (John Beard/Stars and Stripes) 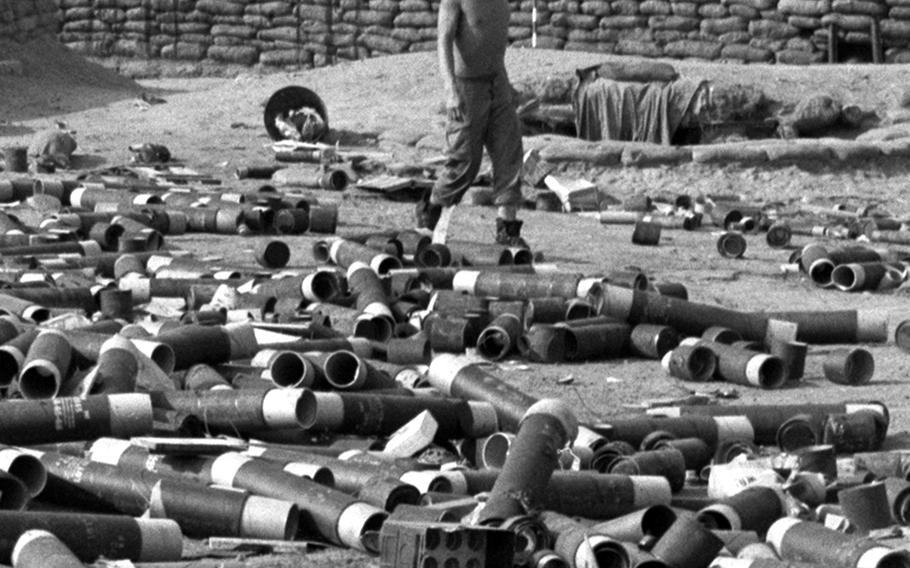 Buy Photo
Empty 105mm shell containers litter the ground at the Dak Seang Special Forces camp during a break in the Communist siege of April, 1970. (John Beard/Stars and Stripes)

DAK SEANG, Vietnam — After 18 straight days of shellings, this Special Forces camp is nothing but a fortified pile of rubble above ground. But underground, in the bunkers that have been home to hundreds of Montagnards, Vietnamese and U.S. Special Forces soldiers, spirits run high.

U.S. Green Berets say that North Vietnamese Army gunners in the ridgelines that shade this camp are selecting their targets now — holding fire until a helicopter sets down within the perimeter or until an American begins moving away from cover.

"They have something in mind for the future," said Capt. David Cook, 21-year-old commander of the camp. "They are still hanging around."

Green Berets speculate that one thing the NVA has in mind is downing any helicopters that come to rescue two choppers that made emergency landings in the camp during the siege. They say that enemy shells have not touched the two birds but that NVA guns probably have them both zeroed in.

A "friendly" duel has developed, the Green Berets say, between the camp defenders and one Red gunner manning a 75mm recoilless rifle on the eastern ridgeline north of here.

The artillery piece occasionally lobs a few shells into the perimeter, the Green Berets say, then Allied air and artillery strikes are called in on the area where the flash was seen.

As soon as the smoke clears, the Red recoilless riflemen lets loose with another round — just to prove he is still alive and well.

During the height of the fighting here, Green Beret sources say, another fight was going on within the perimeter as Vietnamese and Montagnard troops scuffled for supplies air dropped into the beleaguered camp.

One instance the sources cited involved Vietnamese soldiers trying to sell flak jackets and gas masks to the Montagnard Civilian Irregular Defense Group soldiers who were manning the perimeter.

Friday night after a supply drop, three Vietnamese soldiers armed with M16s held off a group of Montagnards when the Montagnards approached the drop area.

Though all seems well within the crowded bunkers here, the evidence of the siege is everywhere. The smell of enemy dead and human waste pervades the place. Scores of NVA corpses lie in the camp's barbed wire fortifications, some within 30 yards of the camp's bunkers.

Green Berets say that for several days after the siege began North Vietnamese Army troops moving in trenches within the outer perimeter of the camp was a common occurrence and that some NVA sappers — charging in pairs, tied together at the wrist — even assaulted the perimeter in broad daylight.

Could the NVA have gotten through?

"You can always take any military objective if you are willing to pay the price," according to Cook. But he said he never feared the camp would be overrun.

Traces of teargas dumped on the camp during some of the assaults remain in the corners of bunkers and in tunnels leading to fortifications.

At night the camp's defenders huddle together on the bunker floors trying to sleep on makeshift mattresses of flak jackets.

During the day a set of "rules" have developed governing where in camp it's safe to go, and when.

While Americans move about the camp at a pace no slower than a run, Montagnard soldiers and their families have gone as far outside the camp as 300 yards to a nearby stream to take baths and get some fresh water for cleaning.