Daegu schoolchildren reach out to their peers in Iraq South Korean soldiers show Iraqi schoolchildren coloring books that were among the school supplies they helped distribute to the school. In all, the Taegu American School collected two big boxes of supplies to send to the Iraqi students. (Courtesy of Patricia Minkle)

South Korean soldiers show Iraqi schoolchildren coloring books that were among the school supplies they helped distribute to the school. In all, the Taegu American School collected two big boxes of supplies to send to the Iraqi students. (Courtesy of Patricia Minkle) 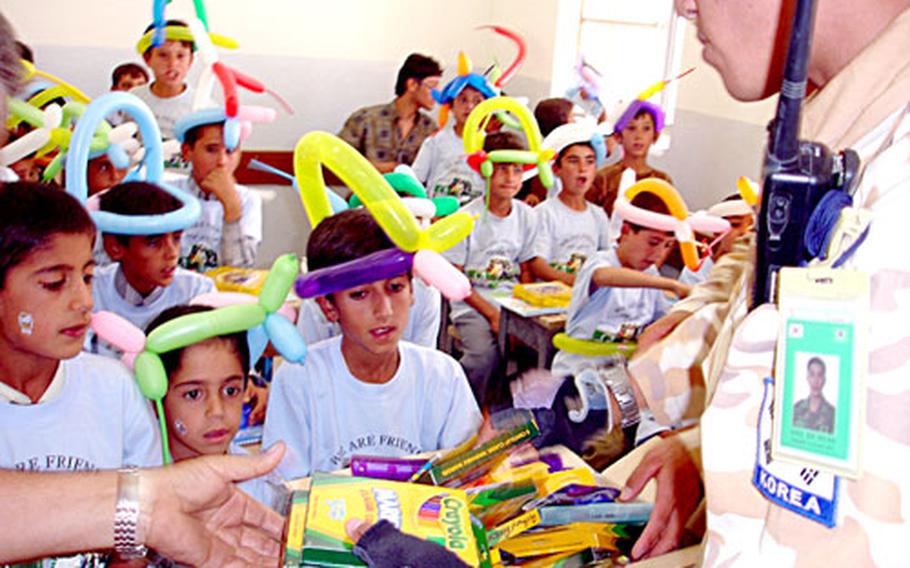 A South Korea Army soldier passes out new boxes of crayons to Iraqi schoolchildren. The crayons were among school supplies collected and donated by children in Taegu American School, Daegu, South Korea, and distributed by U.S. and South Korean soldiers in Iraq. (Courtesy of Patricia Minkle) 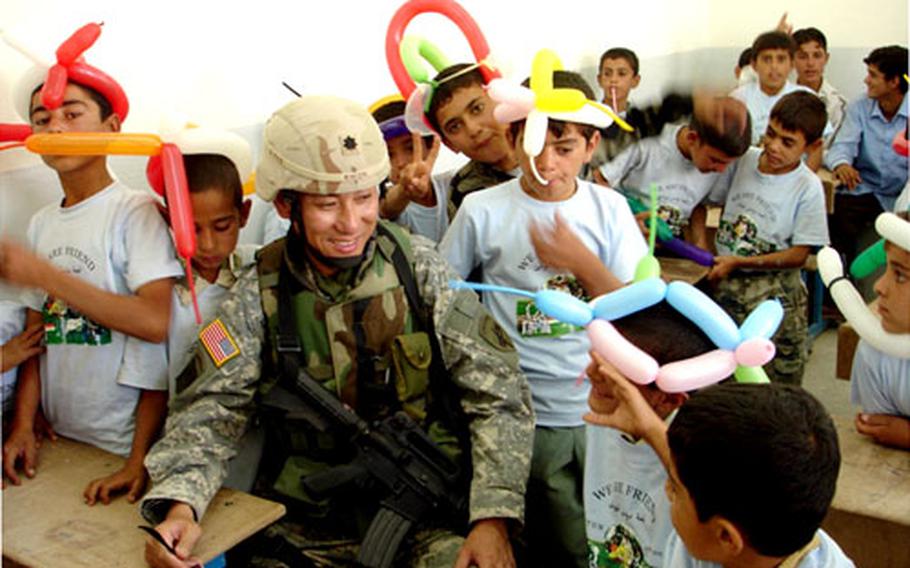 PYEONGTAEK, South Korea &#8212; The last Patricia Minkle heard, there are some Iraqi kids with school supplies she and students at Taegu American School sent to the war-ravaged country.

The thoughtfulness began with an e-mail Army Col. Donald J. Hendrix, Area IV Support Activity commander, sent in March to Principal Helen Bailey saying the Army was involved in an effort to help schoolkids in Iraq.

Bailey forwarded the e-mail to Minkle, who at that time taught first grade and now teaches fifth- and sixth-grade writing and language arts.

She had an idea. One thing Iraqi children would need are school supplies. She soon had a schoolwide donation drive going.

She posted a flier and spread word that supplies could be brought to her classroom. She asked for graphite and colored pencils, crayons, pens, markers, glue sticks, scissors.

&#8220;I tried to get them involved because I know that children love to help other children,&#8221; Minkle said.

&#8220;And when they heard there were little boys and girls just like them that needed things to do well in school, they were more than happy to go home and find a box of crayons that they don&#8217;t use or a pencil box that they haven&#8217;t used or just little things.

She explained the idea to her own class but kept clear of grim war zone details. &#8220;There are boys and girls in Iraq that don&#8217;t have all of the things that you guys enjoy,&#8221; she recalls telling them.

The supplies flowed in, a marker, a glue stick, a pencil box at a time.

By April, the donated supplies filled two big boxes, which Hendrix&#8217;s office picked up and sent to Iraq.

Later, the school got an e-mail from the Army confirming the supplies had found their way to the Iraqi schoolkids. They&#8217;ve since received photos showing a U.S. Army officer and South Korean troops on Iraq duty giving the kids the supplies, Minkle said.