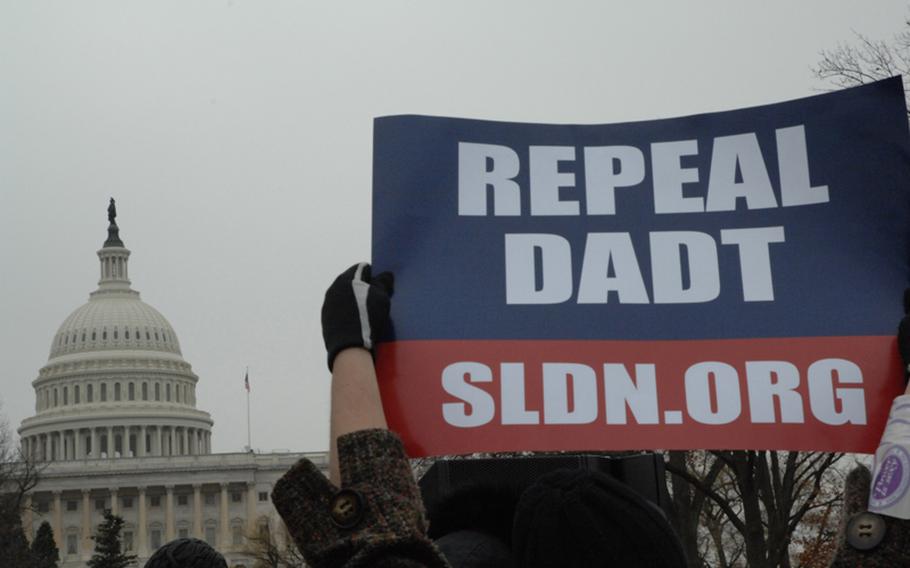 December 10, 2010 Advocates of the repeal of the military's ''don't ask, don't tell'' policy gather outside the U.S. Capitol Friday, a day after the repeal effort died in the Senate. (Rick Vasquez/Stars and Stripes)

WASHINGTON &mdash; Gay rights advocates are scrambling to recover from another Senate setback for &ldquo;don&rsquo;t ask, don&rsquo;t tell&rdquo; repeal, insisting that there&rsquo;s still hope the measure could pass this year.

But with those prospects unlikely, opponents and supporters of the effort are looking at future challenges to the controversial law, which bans openly gay troops.

An ongoing court case that briefly overturned the law this fall may now be the biggest threat to the 17-year-old ban. For months, President Barack Obama and Pentagon leaders have insisted that allowing the courts to abolish &ldquo;don&rsquo;t ask, don&rsquo;t tell&rdquo; would be a potentially disruptive move, but the case now is the most realistic option for repeal.

On Thursday, Senate Republicans stalled the annual defense authorization act &mdash; with the repeal language attached &mdash; for the second time this year.

The measure fell three votes short of the 60 needed to advance the legislation.

With just days left in the lame-duck session, repeal advocates Sen. Susan Collins, R-Maine, and Sen. Joe Lieberman, I-Conn., have vowed to re-introduce it as a stand-alone bill. But Lieberman admitted to reporters that &ldquo;this is not going to be easy.&rdquo;

Though several Republican lawmakers have publicly supported repealing the law, they have also promised to block any legislation Democrats try to advance before dealing with expiring tax cuts.

Lawmakers also have the new Strategic Arms Reduction Treaty measure, the controversial Development, Relief and Education for Alien Minors Act, and a host of budget bills to complete after that. And the measure would also have to pass through the House, which has its own crowded schedule.

That gives the stand-alone bill little chance to succeed. Aubrey Sarvis, executive director for the pro-repeal Servicemembers Legal Defense Network, said gay rights advocates are also looking at attaching the measure to the upcoming continuing resolution, which Congress must pass to keep the federal government operating past this month.

&ldquo;We need to be on the bill that moves, period,&rdquo; he said.

&ldquo;If there&rsquo;s one thing the health care fight has taught us, until the new Congress is seated and [as long as current House Speaker] Nancy Pelosi and [Senate Majority Leader] Harry Reid are in control, we&rsquo;re going to be concerned that they&rsquo;ll try to pass a lame-duck change in this policy,&rdquo; McClusky said.

If legislative efforts fail, Obama will likely continue to publicly push for Congress to repeal the law next session. But Republicans will take control of the House, and incoming Speaker John Boehner, R-Ohio, has opposes repeal.

That could create a two-year legislative freeze in that chamber. Both Obama and Defense Secretary Robert Gates have insisted that legislative action is needed before a court order forces the military&rsquo;s hand.

In October, a California federal judge ruled the &ldquo;don&rsquo;t ask, don&rsquo;t tell&rdquo; law discriminatory and unconstitutional, and issued an injunction ending enforcement of it. That shut down the ban on openly gay troops, but only for a day, until an appeals court overturned the injunction.

Department of Justice officials enraged gay rights advocates by arguing for preserving the law, even as Obama publicly expressed his disdain for it. White House officials said allowing courts to overturn valid, existing laws sets a bad precedent, and Gates has warned it could lead to a tumultuous transition for the military.

Now, repeal opponents and supporters wonder if both men will change their minds. On Thursday, White House spokesman Robert Gibbs said the president still prefers the legislative path but hinted at the possibility that the courts could ultimately strike down the law.

&ldquo;The policy is going to come to an end,&rdquo; he said. &ldquo;Congress has to ask themselves how they want to end it and what role they want to play in ensuring that it&rsquo;s done in an orderly way.&rdquo;

Gay rights advocates have also pushed for Obama to simply issue an executive order striking down or circumventing the &ldquo;don&rsquo;t ask, don&rsquo;t tell&rdquo; law, a move opponents have labeled an insult to the legislative branch and rule of law.

White House officials have consistently rejected that idea, saying that Congress must weigh in on the matter. But in recent months Gates has ordered numerous changes regarding how the law is implemented, raising the burden of proof for dismissing gay troops and effectively reducing the number of individuals kicked out of the service.