Dad’s tales of Battle of Okinawa live on 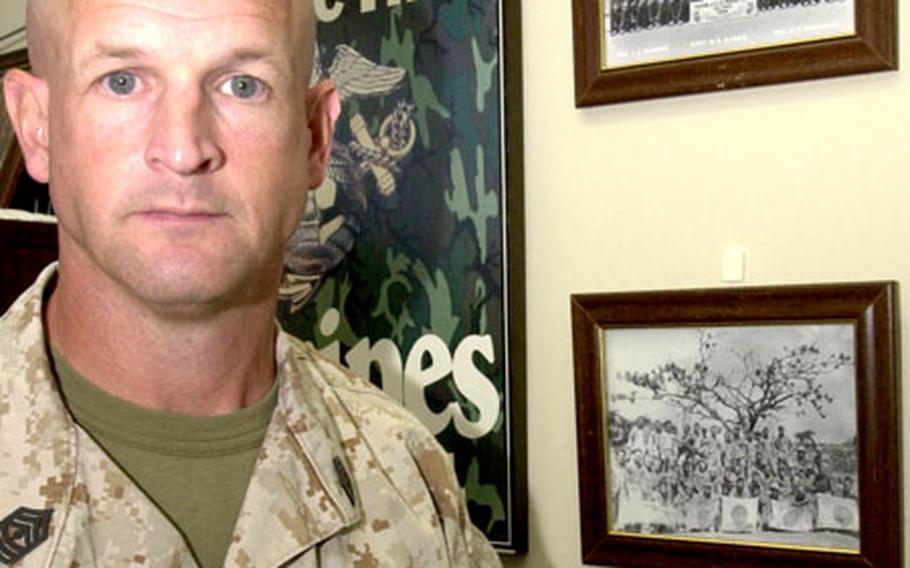 Marine 1st Sgt. Scott Smith, 9th Engineer Support Battalion, says he often thinks of his father, who served with the Marines during the Battle of Okinawa, as he drives around the island. (Fred Zimmerman / S&S)

When Smith was growing up in Falls Creek, Pa., he said, his father, Robert Smith Jr., would tell him stories of the Battle of Okinawa. The elder Smith was a private assigned as a flamethrower within the 6th Marine Division. He landed near Torii Station on April 1, 1945 &#8212; his 20th birthday.

Smith, whose father died two years ago, said one of his favorite stories is about the last meal his father ate before landing on the island. He said the meal was so good, he went for seconds, but the sailor serving food turned him away.

&#8220;Now look here, this might be this Marine&#8217;s last meal, so you are gonna give him what he wants and as much as he wants, do you understand me?&#8221; recalls Smith of his father talking about the platoon sergeant.

Another favorite tale also involves the platoon sergeant. As the unit was digging in at nightfall the day they landed on Okinawa, an airplane was heard approaching. The unit was near a Japanese airfield and a Zero fighter plane was coming in for a landing.

As the plane flew over the troops making fighting holes, the platoon sergeant picked up his Thompson submachine gun and fired several bursts at the fighter. Smith&#8217;s father said the troops all laughed at the sergeant &#8212; until the engine stopped and the plane crashed.

&#8220;Then the platoon sergeant hollered and said &#8216;What the hell are you looking at? Get back to digging,&#8217;&#8221; Smith recalled his father saying. &#8220;For 30-plus years now, that story has stuck with me, and as a junior troop, I understood from the actions of my staff NCOs and officers that getting the job done and taking care of us was all that really mattered. This story of my father is just one example of what has made the Marine Corps the unique organization that it is today.&#8221;

Smith said his father was drafted into the Navy, but when he was in-processing in late 1944, a Marine said the Corps needed volunteers to be engineers. His father volunteered and was on a train to San Diego for boot camp. After graduation, he went to Camp Pendleton, Calif., where he was told he was going to be a Browning automatic rifle gunner.

During training for the Battle of Okinawa on Guadalcanal, flamethrowers were needed, and Smith&#8217;s father was chosen. Smith said his father was the only original flamethrower in his battalion that left Okinawa alive.