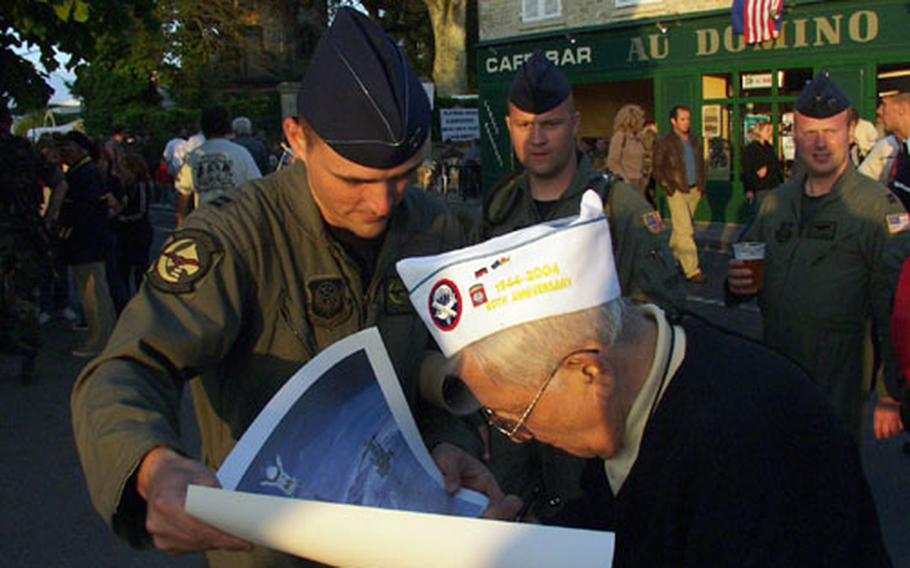 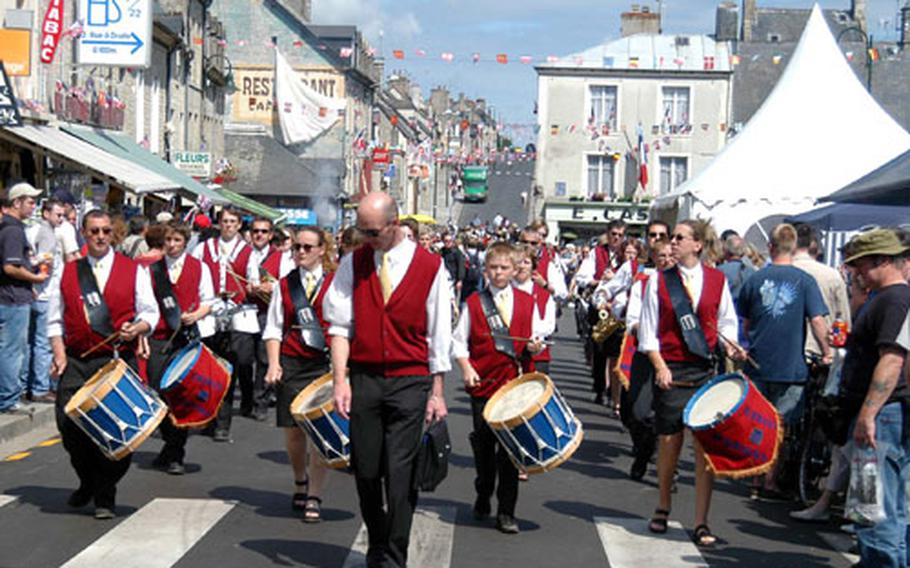 The leader of the band makes sure that his musicians are in step as the march through the streets of Ste. Mere-Eglise, France, as the town celebrated the 60th anniversary of its liberation by American soldiers. (Michael Abrams / S&S)

STE. MERE-EGLISE, France &#8212; World leaders visiting Normandy this weekend for the 60th anniversary of D-Day may come with all the trappings, but everyone knows who the real VIPs are.

Given the choice of meeting a head of state or a D-Day veteran, most people attending the commemorative ceremonies would prefer to be in the presence of the vet.

&#8220;The veterans are the most important people, because they did it. They did the job,&#8221; Carry Engelhard, a Dutch World War II enthusiast, said during a visit to Ste. Mere-Eglise, the first French town liberated during the war.

No longer as spry looking as the men and women in the 1940s newsreels, hundreds of veterans nonetheless have come to northern France for the festivities. And wherever they go, they draw crowds of admirers.

Engelhard, for example, shook her head in disbelief at the thought of so many men coming from a land so far away to free people they don&#8217;t even know.

Daniel Bologna came ashore on D-Day as a member of the 442nd General Hospital.

Europeans would say to Bologna and other vets that the feeling is mutual.

Bologna arrived in the fourth wave of men and materiel. A hospital supply clerk, he spent a few weeks in Normandy before heading back to England with a boatload of injured soldiers and sailors.

Like so many World War II veterans, the New Yorker seems somewhat embarrassed by all the attention. He and all the others in uniform, men and women, were just doing their jobs, he said. After the fighting, they kept the fanfare to a minimum by asking for nothing more than the chance to go home.

Only in the last decade have they really taken the time to reflect on what they and the rest of the world went through, Bologna said.

But as they did during and for decades after the war, the veterans seem to intuitively know the proper balance between pride and privacy.

The Wisconsin native said the German army was still lobbing artillery shells at the allied beachhead well after the invasion. Men in his unit, including a chaplain, were not spared the horrific consequences of war just because they waded ashore a few days later.

In the year that followed, Beach, who was assigned to the 9th Infantry Division, 9th Reconnaissance Cavalry Troop, earned five campaign medals and the Silver Star. He even was among a handful of U.S. soldiers to meet up with Soviet soldiers along the Elbe River.

Beach recounted a few more war stories, but nothing perked him up as much as getting the chance to say how proud he is of a granddaughter, Holly Borowski, who just graduated from the Air Force Academy.

That&#8217;s the way the vets are: Lend them your ear and they&#8217;ll talk briefly about the fighting before transitioning to their kids and grandkids.

On Thursday, H. Smith Shumway was holding court at the American Normandy Cemetery above Omaha Beach. Shumway, a 1st Infantry Division veteran, returned to Normandy with more than a dozen family members, led by his son-in-law, John Bennion.

Bennion watched from a distance while Shumway, who lives in St. Louis, Mo., was peppered with all sorts of questions from a group of younger war enthusiasts from Britain dressed in period uniforms.