World War II veteran Jean Tierney, center, a flight nurse during the war, poses with two women following a ceremony celebrating the nurses of the war at Ste-Laurent-sur-Mer, Saturday, June 7, 2014. Tierney met her husband-to-be Edward during the war and both were honored at the ceremony. (Michael Abrams/Stars and Stripes)

World War II veteran Jean Tierney, center, a flight nurse during the war, poses with two women following a ceremony celebrating the nurses of the war at Ste-Laurent-sur-Mer, Saturday, June 7, 2014. Tierney met her husband-to-be Edward during the war and both were honored at the ceremony. (Michael Abrams/Stars and Stripes) 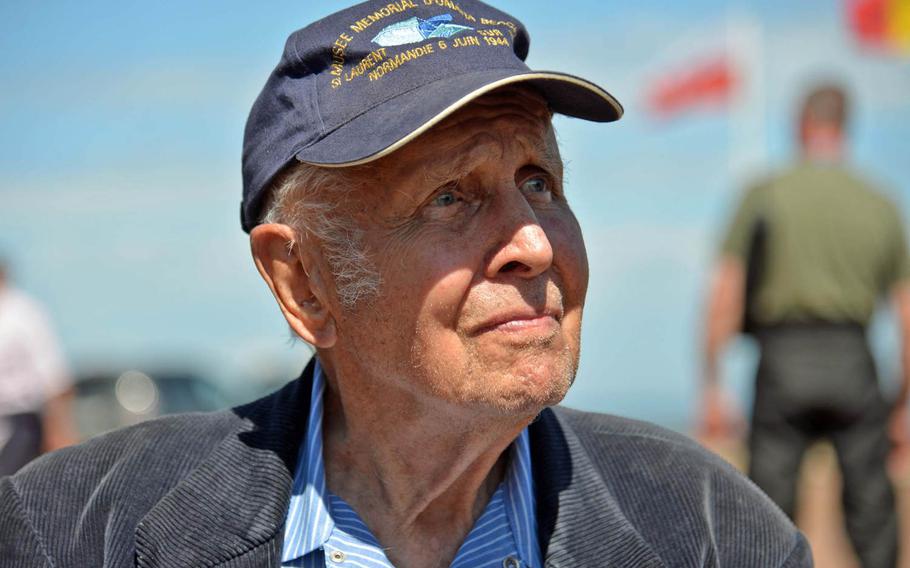 Edward Tierney, a World War II C-47 pilot talks to people at a ceremony celebrating the nurses of the war at Ste-Laurent-sur-Mer, Saturday, June 7, 2014. Tierney met his wife-to-be Jean during the war and both were honored at the ceremony. (Michael Abrams/Stars and Stripes) 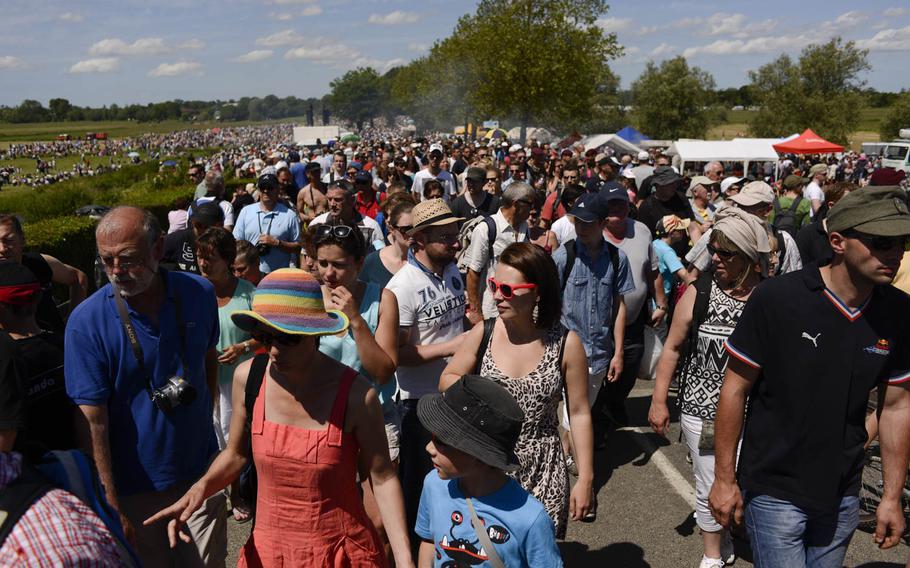 Spectators file down a road in Cauquigny, France after watching a parachute drop commemorating the 70th anniversary of D-Day, June 8, 2014. (Joshua L. DeMotts/Stars and Stripes)

CAUQUIGNY, France — When American paratroops dropped in here in the middle of the night on June 6, 1944, they were welcomed by a hail of Nazi bullets.

Landing on the same field Sunday, hundreds of American and allied paratroops found themselves on the edge of something like a state fair, with thousands of spectators, cold beer, grilled meat and a party atmosphere awaiting them.

Intermingled with the somber atmosphere of graveside ceremonies and memorials to the heroes and units that make up the foundation of the annual D-Day remembrance is a celebratory mood buoyed by parades, red-white-and-blue bunting and random acts of kindness and gratitude.

The mood is fitting for a region of France that was the first to be liberated by American and Allied forces in World War II after years of Nazi occupation. American, British and Canadian flags fly alongside the French tricolor outside French homes and businesses and along the streets. The flags are signs of respect, but also of reverence for the soldiers who risked, and sometimes gave, their lives to liberate Normandy.

At a ceremony Saturday celebrating the nurses of World War II, a stranger came up to Edward and Jean Tierney — married veterans — and kissed each of them on the cheek.

The woman, maybe in her mid-60s, didn’t identify herself. She just thanked them “for giving us liberty” and moved on.

“We’re not celebrities,” Jean Tierney said, “but the people are so friendly that they are just amazing.”

She served as a flight nurse in the war, and her husband as a C-47 pilot.

“I had what I describe as a mercy mission, because we evacuated wounded from Normandy to England to get them into the English hospitals quicker, which probably saved some of their lives,” Edward Tierney said.

He proposed to his wife outside of Paris and they married in 1946. They came back to France for the first time 30 years ago.

“People would come up and thank you for their liberty, and of course we didn’t feel that we really deserved that,” Jean said. “But they invite you to their homes, they become your friends. It’s just like a second home to us, really.”

Despite the clearly commercial aspect of much of the celebration (at a memorial ceremony Thursday in Picauville, the phrase “sponsored by American Airlines” passed the lips of speakers at least twice, and beers at Utah Beach run a cool $8.90), World War II veterans can’t walk but a few steps without someone thanking them for their service, asking for an autograph and posing giddily beside them as if the vet were Oprah Winfrey or Tom Hanks.

Traffic is near gridlock everywhere, but the annoyance at that is tempered on recalling that the reason for all the cars is the sheer number of people here to pay tribute to “The Greatest Generation.”

Memorials to fallen and heroic Americans are more common here than Starbucks in New York City. Restaurants, businesses and streets bear the names of units and soldiers who fought in Normandy’s hedgerows and fields. When the tourists go, the names remain. While the place is full of tourists during the week of events to commemorate D-Day, the people of Normandy spend every day of every year thanking the Allies for saving them all those years ago.

Families in the region and beyond have adopted nearly all of the graves at the American cemetery above Omaha Beach at Colleville-sur-Mer, where American fighting men died by the thousands on D-Day. French families visit and care for the graves of these fallen strangers as if they were family.

Servicemen and -women who survived the war are treated just as well, given room and board by French families who believe they owe the veterans for their freedom.

“There’s one family that’s hosted me every five years,” said Ray Tollefson, a Ranger who was gravely wounded at Omaha Beach and returned to Normandy for the first time in 1984. “And that family has introduced me to many, many more great Normandy residents, and the feeling I have with them is just mutually great.”

He came here the first time to pay his respects to nine of his Ranger buddies who are buried here.

Coming back here over and over helps him realize that the lives and blood he and his comrades sacrificed for the liberty of strangers was worth it.

“The friendship of the Normandy people is unbelievable,” he said.