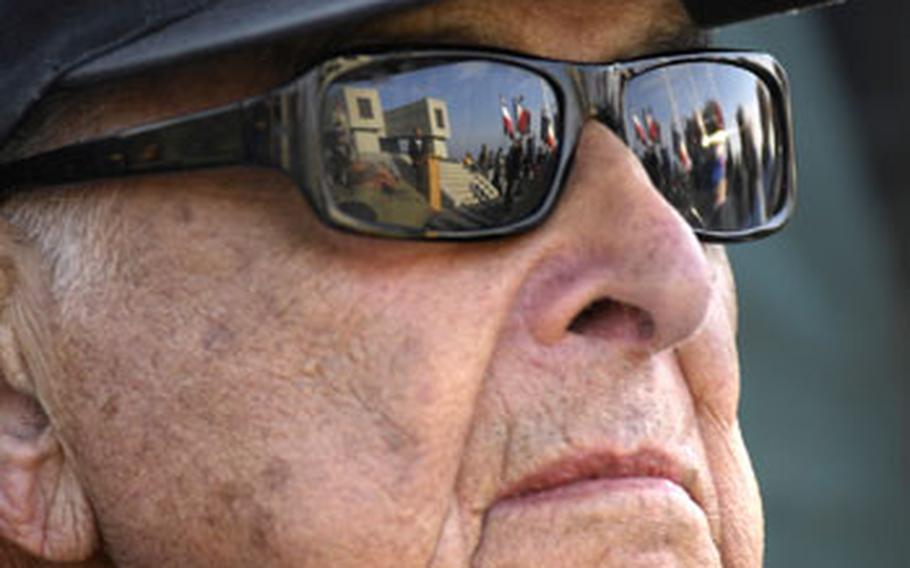 Hal Baumgarten, 84, listens during a memorial ceremony honoring the sacrifices National Guard soldiers made on D-Day. Baumgarten, a keynote speaker at the event, was one of only two soldiers from his boat who made it through the day on June 6, 1944. (Ben Bloker / S&S)

VIERVILLE-SUR-MER, France &#8212; Harold Baumgarten was a 19-year-old private when he landed on Omaha Beach in the early morning hours of June 6, 1944. On Friday, at the National Guard monument overlooking the beach he stormed, the 84-year-old told his story.

The soldiers of 1st Battalion, 116th Infantry Regiment of the 29th Division were young and small. Their average age was 24.

From the British ship Empire Javelin, Baumgarten loaded onto a landing craft assault boat with 28 others and was lowered into the English Channel. It was 3:30 a.m. and pitch black. The temperature was 50 degrees. The waves peaked at 15 feet and splashed over the sides of the low-riding landing crafts, immediately soaking the soldiers inside. Soldiers used their steel helmets to bail the water and vomit floating around them.

Not much of the pre-invasion pounding of German coastal defenses around Vierville-sur-Mer went off as planned.

The battle ship Texas was 12 miles offshore and fired its cannons from 5:55 a.m. until 6:25 a.m. to soften the German defenses. However, the shells overshot the beach. Just before the soldiers were set to come ashore, the Navy fired several hundred rockets toward the coastal fortifications, but the rockets landed short.

Buoyed by rubberized canvas floats, 16 tanks were to lead the infantry on to the beach. Fourteen tanks sank in the waves. Two tanks hit the beach at Dog Green sector. German artillery took out one immediately.

Two of the four 116th Infantry Regiment companies missed their intended landing spots because of swift current. Companies A and B would make the initial assault on Dog Green sector alone.

Baumgarten glanced at his watch. It read 6:40 a.m.

The landing craft to his left hit a mine and exploded, showering Baumgarten&#8217;s boat with wood, metal, body parts and blood. British sailors operating the assault craft got nervous and dropped the exit ramps 50 yards further out from the beach. When the ramp fell, German machine guns mowed down several of men in Baumgarten&#8217;s boat, including the soldier in front of him. Baumgarten dove for the exit. A bullet glanced off his helmet. The 5-foot-10 Baumgarten found himself in neck-deep in bloody water, holding his rifle above his head.

Running across the beach, Baumgarten saw things that no 19-year-old should ever see: body parts on the beach, soldiers carrying flamethrowers instantly cremated when bullets impacted their fuel tanks.

Baumgarten felt his M-1 rifle vibrate. His weapon had stopped a bullet from killing him. The soldier behind him to the left was then shot and killed.

Baumgarten hit the sand behind the last row of heavy-vehicle obstacles. To his right, another 19-year-old private was shot in the chest and tripped over the obstacle. Before going silent, the other private yelled, &#8220;I&#8217;m hit. Mom. Mother.&#8221;

Baumgarten&#8217;s unit had 85 percent causalities within 15 minutes of landing. He suffered three wounds on D-Day and was wounded twice more the following day. Only one other soldier from Baumgarten&#8217;s landing craft survived D-Day.

From the blood spilled that day, the beach looked as if it was painted with a bright red brush.

At midnight, every gun on the beach at Dog Green sector was silent, and every German was captured, killed or on the run.