D-Day plus 65 years: 135 veterans return to Normandy to mark 65th anniversary of D-Day 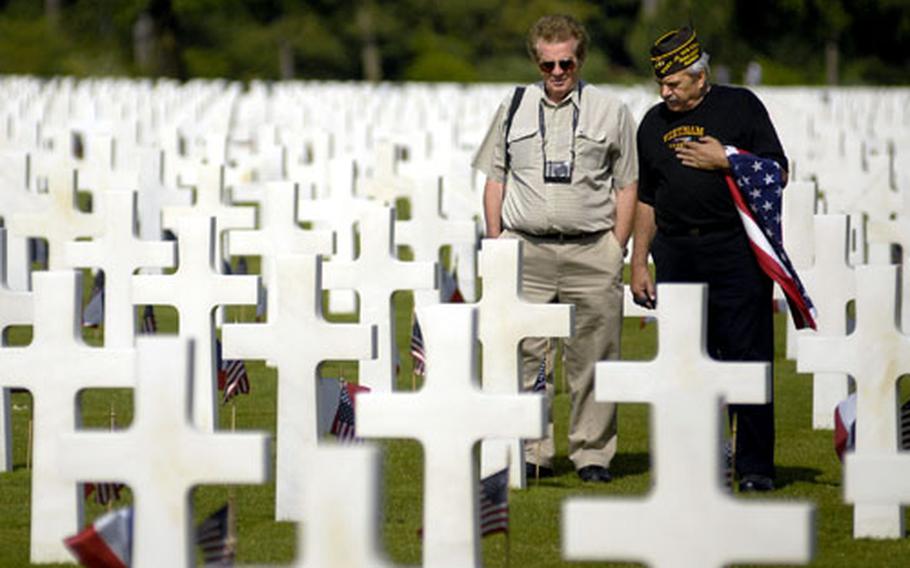 Larry Cavanaugh, right, and his cousin, Don Henry, make their way through the Normandy American Cemetery Friday near Colleville-sur-Mer, France. Cavanaugh traveled from Chicago to visit the site on the 40th anniversary of returning from Vietnam, where he served in the Marines. While at the cemetery, Cavanaugh was given the opportunity to raise and lower the U.S. flag there. (Ben Bloker / S&S)

Larry Cavanaugh, right, and his cousin, Don Henry, make their way through the Normandy American Cemetery Friday near Colleville-sur-Mer, France. Cavanaugh traveled from Chicago to visit the site on the 40th anniversary of returning from Vietnam, where he served in the Marines. While at the cemetery, Cavanaugh was given the opportunity to raise and lower the U.S. flag there. (Ben Bloker / S&S) 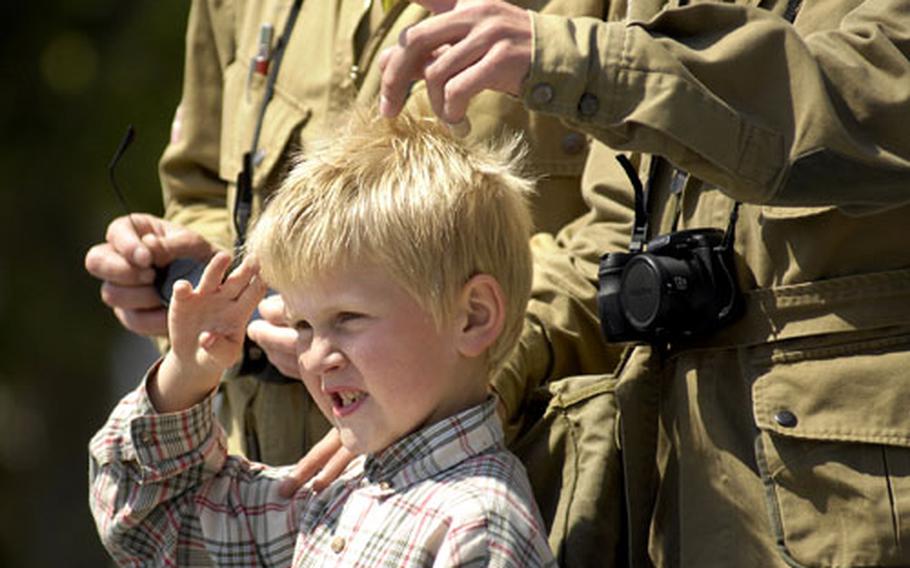 A boy poses with some reenactors in town for the 65th anniversary of D-Day in the town of Sainte Mere Eglise, France. (Ben Bloker / S&S) 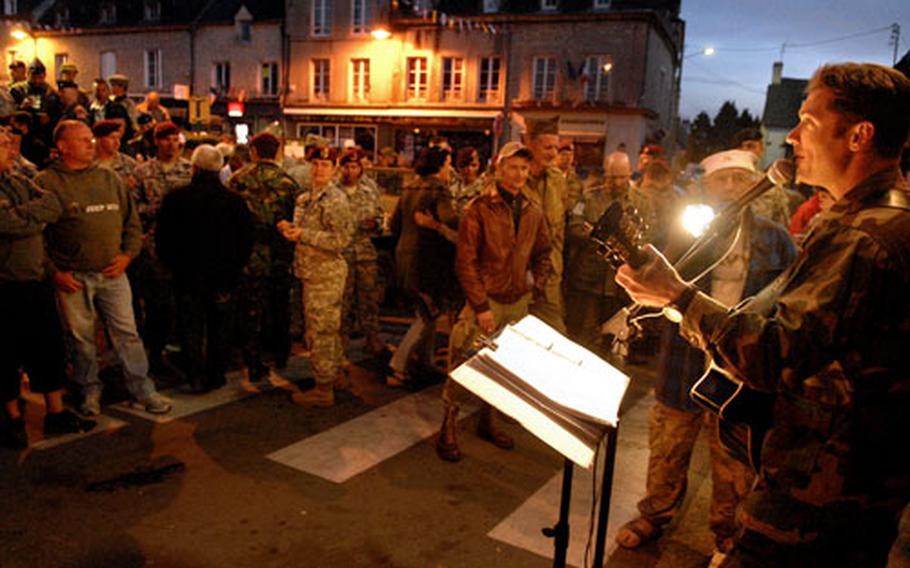 STE.-M&#200;RE-&#201;GLISE, France &#8212; A Finnish officer chatted with two young German soldiers while a Frenchman in leather sandals, camouflage pants and a white sailor&#8217;s hat strummed a guitar near a town square popular with U.S. paratroopers of today and yesteryear.

This is Ste.-M&#232;re-&#201;glise, a place forever known as the first French town liberated by Allied forces in World War II. It&#8217;s a magnet, a touchstone, a site of reverence and revelry. In these parts, the French adore Americans, particularly those military veterans who came ashore in Normandy 65 years ago today.

An Army spokesman said at least 135 veterans who were in Normandy for D-Day had returned to mark this anniversary.

One of those is 93-year-old Willie Southerland. Assigned to the 18th Infantry Regiment, 1st Infantry Division, Southerland was a 27-year-old private when he landed on Omaha Beach on June 6, 1944. He hadn&#8217;t been back since.

As he spoke, 49 children from a school in Buckinghamshire, England, walked the immaculate cemetery grounds where 9,386 U.S. servicemembers are interred.

"I didn&#8217;t expect there were this many people buried here," said 11-year-old Thomas Clark.

Also walking the grounds were a group of Army Rangers from Savannah, Ga. Among them was Sgt. 1st Class Rob Sciandra.

"You can still feel a weight in the air," Sciandra said as he stood near the white, marble gravestone of a fellow ranger, Howard M. Henry of Kentucky. "You know what went on here."

Security in the region is exceptionally tight, even more so than in past years. Several roads, including the major artery leading out of Caen, will be closed for much of Saturday to regular traffic. Access to the American cemetery, where Obama and French President Nicolas Sarkozy will speak, will be by invitation only.

The mood in Ste. M&#232;re &#201;glise has been considerably more relaxed, especially in the evening, when veterans, current servicemembers, tourists and locals mingle, often with a drink or a snack in hand.

Adding a degree of authenticity to the scene have been scores of World War II re-enactors. Some are perfectly attired, even down to their boxer shorts. No kidding.

And that French singer in sandals, Guy Scordia, went so far as to yield his guitar and the stage to Navy Lt. Cmdr. Chris Irwin from Stuttgart, Germany. Irwin belted out five songs, from Elvis to the Eagles. He was good, and the crowd loved it.

Stars and Stripes reporter Steve Mraz contributed to this story.