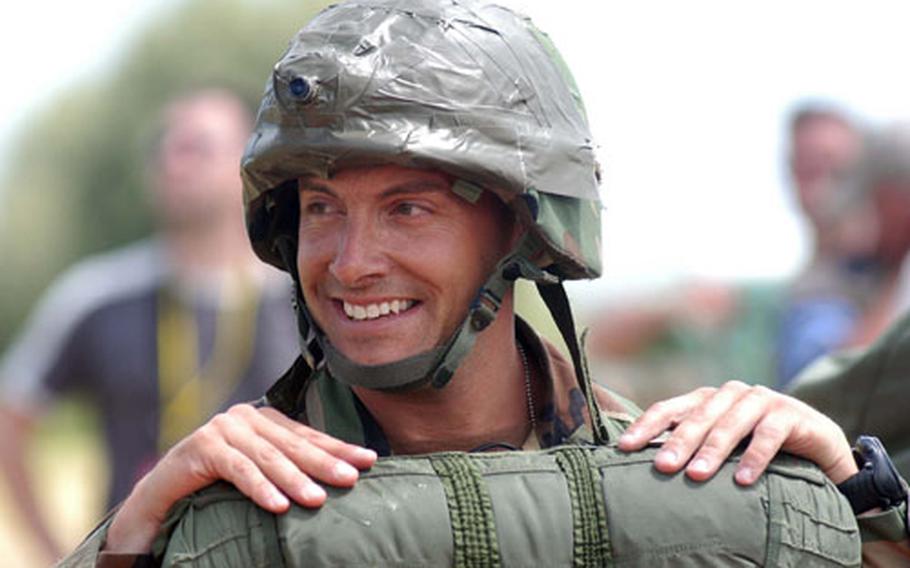 An unidentified 173rd Airborne Brigade soldier smiles as he waits for a boat to take him across a canal near Ste. Mere-Eglise, France, after he parachuted in with about 600 other soldiers of the 173rd and the 101st and 82nd Airborne Divisions. (Michael Abrams / S&S)

An unidentified 173rd Airborne Brigade soldier smiles as he waits for a boat to take him across a canal near Ste. Mere-Eglise, France, after he parachuted in with about 600 other soldiers of the 173rd and the 101st and 82nd Airborne Divisions. (Michael Abrams / S&S) 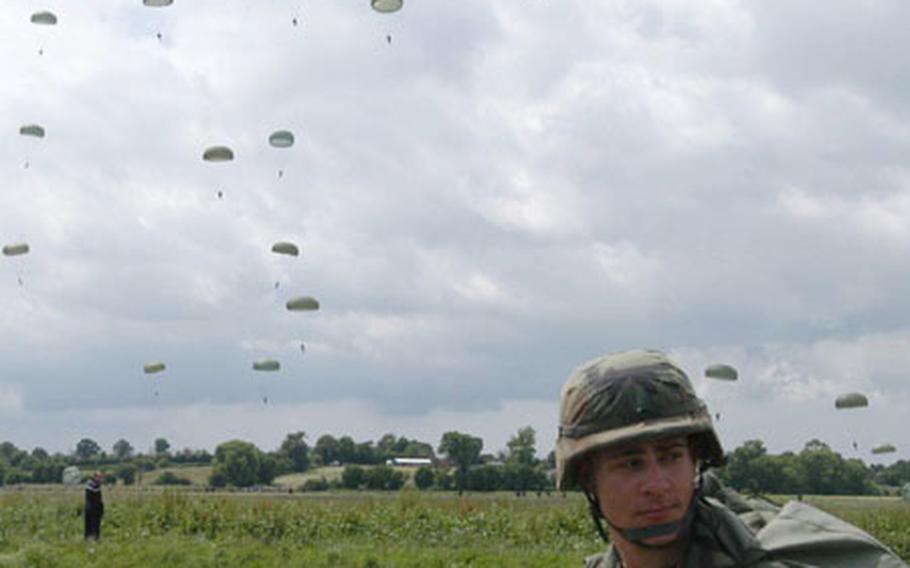 Staff Sgt. James L. Cannon of the Vicenza, Italy-based 173rd Airborne Brigade stands in a field on the outskirts of Ste. Mere-Eglise, France, after he parachuted down on Saturday. More than 600 soldiers from the 173rd and the 101st and 82nd Airborne Divisions jumped from U.S. Air Force C-130 and C-17 airplanes. (Michael Abrams / S&S) 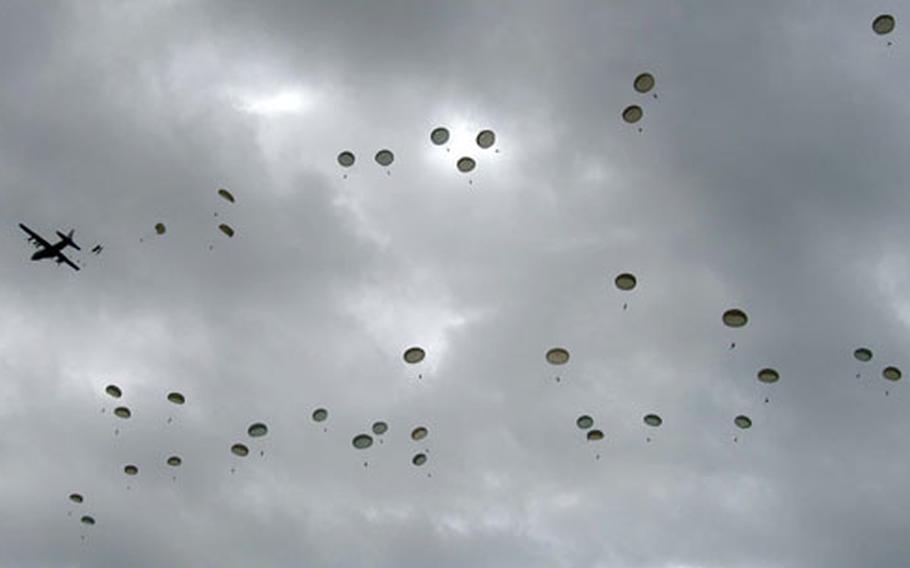 Parachutes fill the sky over Normandy as 610 soldiers from the 101st and 82nd Airborne Divisions and the 173rd Airborne Brigade jumped from U.S. Air Force C-130 and C-17 airplanes near Ste. Mere-Eglise on Saturday. (Michael Abrams / S&S) STE. MERE-EGLISE, France &#8212; The last time Joseph Stritto was in France, he was struggling to dodge dead cows &#8212; shot by the Germans &#8212; so he could land his Waco glider in a farm field and unload the 14 soldiers he was carrying.

On Saturday, Stritto, 86, was among a handful of World War II veterans who had survived the D-Day invasion at Ste. Mere-Eglise and returned for the 60-year anniversary.

Stritto, then of the 441st Troop Carrier Command, was among the first wave of U.S. soldiers in the invasion.

Late on June 5, 1944, 16,000 American soldiers from the 82nd and 101st Airborne divisions jumped from troop carriers or were part of units that landed in gliders at Normandy that day. On Saturday, the veterans and their families and thousands of onlookers were treated to a re-enactment.

Sixteen Air Force planes, including C-130s, MC-130s and C-17s, flew over the open farm field so paratroops from the 82nd and 101st and the 173rd Airborne Brigade could parachute to the ground.

In all, 610 soldiers jumped Saturday, their green chutes unfurling as they fell.

Among them was Sgt. 1st Class LaMonta Caldwell, 37, of Company B, 2nd Battalion, 503rd Parachute Infantry Regiment, of the 173rd Airborne Brigade in Vicenza, Italy.

&#8220;I was jumping in the memory of all the guys who actually jumped that day,&#8221; Caldwell said. The last time Caldwell had jumped was on March 26, 2003, when the unit parachuted into Bashur, Iraq.

Just before cargo planes unloaded the soldiers Saturday, Henry Scott, a C-47 pilot who had dropped troops in the same area on the eve of D-Day, wanted to talk less about the current jump and more about the one he participated in.

Thousands of visitors flocked to Ste. Mere-Eglise for the parachute drop and other ceremonies, turning the normally quiet Norman town into a festive hub. To reach the jump zone meant a nearly two-mile walk from the town center, but that didn&#8217;t seem to deter anyone.

But once Jumper was in the grandstand, Smith, 22, used her video camera to record the airborne troops falling from the sky. She said the French people&#8217;s reaction to the U.S. soldiers, as well as being in the presence of World War II veterans, had been an enormous honor.

At the 50th anniversary of D-Day, it was cold, windy and wet.

This year, beautiful weather put everyone in a festive mood. Since Thursday, there has been little rain and mostly blue skies that helped turn the D-Day commemoration into a joyful occasion.

The scene at Ste. Mere-Eglise, one of the focus points for events, was like that at a street party. On the Place 6 Juin, hundreds of current military members mingled with dozens of veterans and thousands of well-wishers from across Europe. They posed for photos with small children and re-enactors dressed as French Resistance fighters and laughed at jokes they probably did not understand.

All the while, shopkeepers and food vendors, who had set up stands to accommodate the milling crowds, patiently answered questions in English &#8212; and with a smile.

The mood at Normandy American Cemetery, set just above the sands of Utah Beach, was respectful but not somber Saturday as World War II vets, joined by family and thousands of European visitors strolled across the neatly manicured grounds.

The cemetery was one of several stops on D-Day bus tours. But it was an important one.

Buried here are 9,386 Americans, most of whom died during the Battle of Normandy, an 80-day period that began June 6, 1944. Saturday, each white cross and Star of David had miniature U.S. and French flags planted in front of it.

Incredible as it may seem, the Norwegian military regularly used U.S. Army World War II vehicles until the mid-1980s, according to a Norwegian army veteran.

The vehicles&#8217; longevity is a testament to the simplicity of 1940s technology.

Nowadays, collectors of vintage World War II vehicles often travel to Norway to buy them or their parts, which apparently are plentiful.

Pande-Rolfsen said he&#8217;s known some enthusiasts who have traveled to Norway from as far away as Arizona.

A WWII jeep purchased in Norway can cost anywhere from $3,000 to $6,000, said Petter Zachaniassen, who came to Normandy with Pande-Rolfsen and other Norwegian re-enactors.

Over the past several days, D-Day veterans and World War II buffs assembled in Normandy have perked up whenever a member of Stars and Stripes approaches them for a comment or photo.

At a caf&#233; on Utah Beach, photo images of Stripes&#8217; front pages adorn the walls, chronicling the progression of the war from the D-Day landings to the end of the war.

In Ste. Mere-Eglise, a Dutch couple offered rides on an authentic Stars and Stripes transport vehicle used during the war. They and the vehicle have been driving to Normandy every year to take part in D-Day commemorative events.

Veterans have told Carry and Joost Engelhard they were so focused on what they were doing in their area that they often had scant knowledge about what was happening throughout the theater.

Veterans, the couple said, often recount how they depended on the newspaper to provided them with an overview of how the war was unfolding.

&#8212; Kevin Dougherty and John Taylor contributed to the briefs on this page.