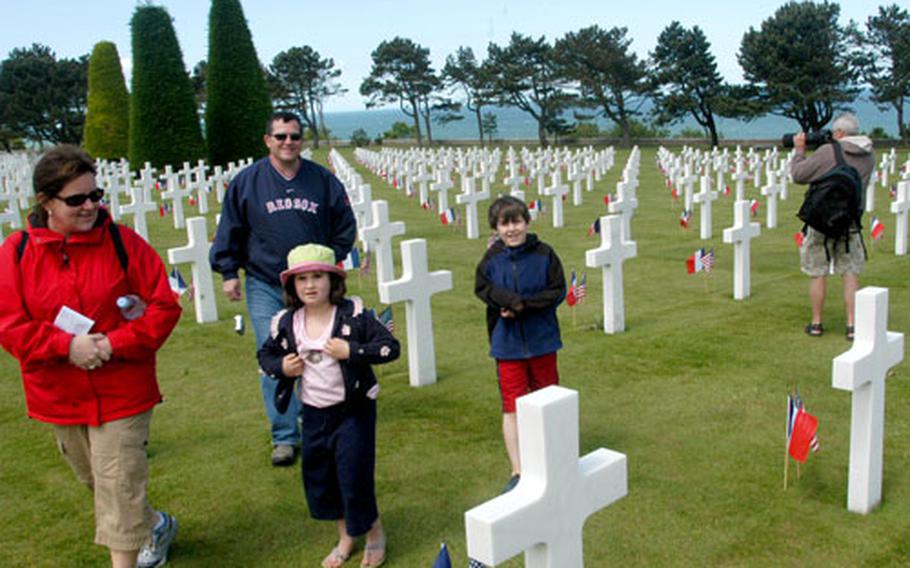 Katy and David Greco of Southborough, Mass., and their children, Gracie, 7, and Robbie, 9, tour the American Cemetery at Normandy, France, on May 29. (Charlie Coon / S&S)

SAINTE-MERE-EGLISE, France &#8212; The big blowout was for the 60th back in 2004. Bush, Blair, Chirac and Schroeder all came, causing a big fuss and traffic jams.

Those veterans who were still alive were in their 80s. It was best to honor them, so went the sentiment, before it was too late. Even actor Tom Hanks got into the act by pushing for funds for a World War II memorial in Washington.

But after the 60th anniversary of the June 6, 1944, D-Day invasion, when Allied forces stormed Normandy to push Hitler&#8217;s army out of France, interest in the history would surely fade. Or would it?

&#8220;No, it really goes forward,&#8221; said Fred Rhodes, assistant superintendent at the American Cemetery in Normandy. &#8220;The Eastern bloc countries are now coming every year. In May it&#8217;s mostly French school kids. In the summer it&#8217;s [the busiest], from the middle of June until the end of September. Then through the end of October it&#8217;s mostly retired people. We now also get a lot of Chinese tourists.&#8221;

Through late May, approximately 450,000 people had visited the cemetery, Rhodes said, which is about 25 percent more than normal. Business was brisk for Memorial Day weekend, when about 200 buses and 5,000 cars pulled into the parking lot over three days.

&#8220;In the three years I&#8217;ve been coming here, it&#8217;s expanded into the little towns,&#8221; said Army Sgt. 1st Class Erik Math of the Defense Attache office in Paris, which coordinates U.S. military support for the festivities.

Gourbesville, Amfreville and Picauville, are among the towns that have erected monuments.

&#8220;All these monuments in the area are from the last years. I think they are doing that for the American soldiers, but also to make a lot of money.&#8221;

At the Crisbecq Battery, where the big German cannons point out from Utah Beach to the ocean, there is now a museum. At Pointe du Hoc, where Army Rangers scaled the ocean cliffs, there are now sidewalks between the bomb craters, fences and metal decks to stand on.

As for this year, Rhodes is projecting about 1.8 million people will visit the cemetery, compared with 1.4 million in 2005.

&#8220;When you see high school kids here placing a wreath at the memorial, you see the kids are listening and absorbing that knowledge.&#8221;

Carry Engelhard, a World War II enthusiast from Doorn, The Netherlands, came last week to Sainte-M&#232;re-&#201;glise, which was the first town liberated by the Allies.

Engelhard and her husband, Joost, have a collection of war-era vehicles, including a Willys Jeep, two weapons carriers, an ambulance and tank destroyer, plus a Harley-Davidson motorcycle they keep in their living room.

&#8220;The youth are re-interested again. The attitude towards the armies is not hostile anymore. Our army has gone in for several countries to keep the peace. I think that young people are seeing that an army can also work for peace.&#8221;