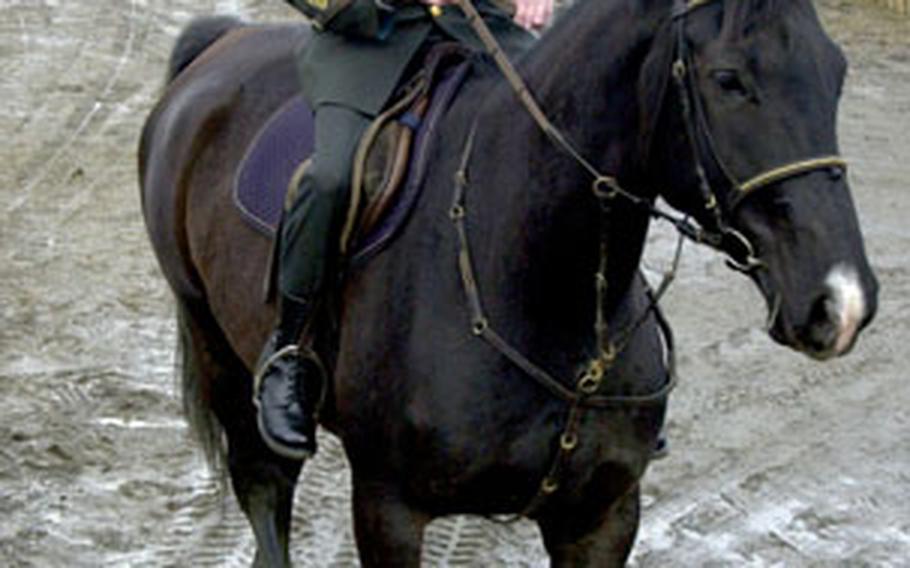 U.S. Vietnam Veteran Gaylord Jerry Toole rides at Houstau, Czech Republic, where the famed Lipizzan horses were rescued by 2nd Cavalry Regiment soldiers in 1945. A memorial will be erected to honor two soldiers who died in the operation (or from wounds sustained in the operation) to save the horses and POWs. (Seth Robson / S&S)

RUSOV, Czech Republic &#8212; For 45 years, nobody visited this small village where 2nd Cavalry Regiment soldier Pfc. Raymond Manz was killed in action during a top-secret mission.

The mission, Operation Cowboy, was designed to rescue 600 Allied prisoners of war and save the famed Lipizzaner horses in April 1945.

During the Cold War, no Czechs were allowed near Rusov &#8212; its German name is Rosendorf &#8212; because it was inside a 15-kilometer exclusion zone that separated Communist Czechoslovakia from free West Germany. Anyone who went there risked being shot by border guards, said Libor Picka, mayor of Bela Nad Radbuzou, the closest inhabited town.

Only ruins remain of the village, but it is here that stones will be laid on April 28 for a memorial honoring Tech 5 (Cpl.) Owen Sutton and Manz, who died of wounds suffered during Operation Cowboy.

The pair, both members of Troop A, 42nd Squadron, 2nd Cavalry Regiment, were wounded while saving prisoners of war and 700 Lipizzans, the most valuable herd of thoroughbreds in Europe.

The memorial, to be dedicated in September, will be under construction when the 2nd Cavalry Regiment, now equipped with Stryker armored personnel carriers, returns to nearby Vilseck, Germany, this summer.

Gaylord Jerry Toole, an American Vietnam veteran living in the Czech city of Plzen, said the memorial project marks a return to recognition in the Czech Republic of U.S. efforts to free the country during World War II.

&#8220;The Russian Red Army repressed the citizens of Czechoslovakia for 45 years &#8212; 1945 to 1990 &#8212; after it was liberated by the Allies from Nazi Germany. During this period the Communists set about destroying the history and any visible monuments to the Free World forces that were involved with its liberation. &#8230; Slowly, the monuments and history are being erected,&#8221; he said.

Operation Cowboy began after a German veterinarian contacted advancing U.S. soldiers under Gen. George S. Patton and asked them to rescue the Lipizzans. The stallions had been moved from the famed Spanish Riding School in Vienna for their safety, but had been separated from mares and foals, which were being held at a German depot in the town of Houstau in then-Czechoslovakia. The horses were being held with Allied POWs who cared for them.

A task force was organized to break through a line of German SS troops, rescue the horses and drive them back to U.S. lines cowboy-style. They were to be saved from both the Germans and the advancing Soviet army. The rescue was immortalized in a 1963 Disney movie, &#8220;Miracle of the White Stallions.&#8221;

According to one historic account, Manz was killed while destroying an SS roadblock and Sutton was wounded during a counterattack on the farm where the Lippizans had been held. He died later in a German hospital.

Today the stables at Houstau, near Rusov, are home to 100 Czech thoroughbreds. Horsemen there perform cowboy stunts &#8212; such as riding standing up &#8212; in honor of Operation Cowboy.

Patrick Biddy, of Charlotte, N.C., a 2nd Cavalry Regiment veteran, said he would attend the stone-laying ceremony at Rusov this month and planned to present local officials with five Stetson cowboy hats.

Several other 2nd Cavalry veterans will attend the September dedication ceremony, he said.