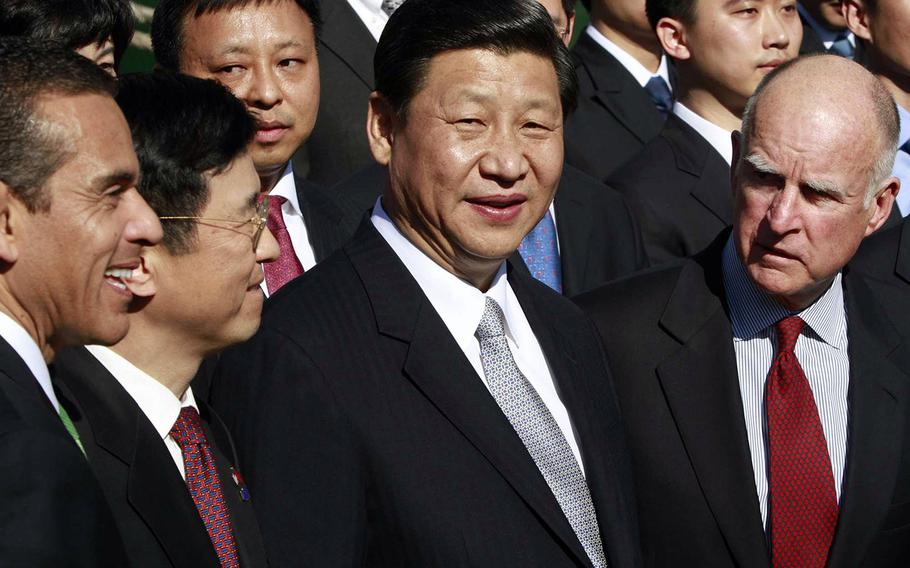 TOKYO — When Chinese President Xi Jinping visits the United States beginning Monday, two security issues are likely to be at the forefront: cyberattacks and tensions over disputed territory in the South China Sea.

The Chinese military and government are suspected of involvement in cyberattacks on U.S. interests, ranging from industrial espionage to the Office of Personnel Management hacks that captured information from millions who applied for U.S. security clearances.

Although Beijing has denied any state-sponsorship of cyberattacks, President Barack Obama told servicemembers during a Sept. 11 town hall meeting that China should change its ways.

“We’ve made very clear to the Chinese that there are certain practices that they’re engaging in that we know are emanating from China and are not acceptable,” Obama said.

“And we can choose to make this an area of competition — which I guarantee you we’ll win if we have to — or, alternatively, we can come to an agreement in which we say, this isn’t helping anybody; let’s instead try to have some basic rules of the road in terms of how we operate.”

What the president didn’t say is what aspects of cyberattacks were ripe for a potential accord, said Graham Webster, senior fellow at Yale Law School’s The China Center.

The U.S., China and other nuclear nations are all developing cyberwarfare capabilities that could be used to undermine nuclear facilities, though such cyberattacks are inherently destabilizing, Webster said.

“Here is something where the two sides, purely out of a mutual self-interest, could sit down and develop a norm,” Webster said.

The two nations could also come to an agreement on commercial espionage, which has targeted defense contractors and technology companies in recent years.

Politburo member Meng Jianzhu met with U.S. officials Sept. 9-12 and achieved an “important consensus” on commercial hacks, according to Chinese media. At the same time, a top Justice Department official postponed a speech on possible sanctions against China, Webster noted.

Webster said it’s very unlikely that any agreements will be forged to prevent incidents like the OPM hack, which compromised the personal information of millions of present and former servicemembers, as well as any character references they listed in their clearance applications.

There isn’t even a consensus within Washington that the OPM data was an illegitimate intelligence target, assuming the Chinese government was involved.

The blame was not on China, but on the U.S. for not playing better defense, retired Air Force Gen. Michael Hayden, who also headed the NSA and CIA, said at a Wall Street Journal-sponsored event earlier this year.

“If I as director of CIA or NSA would have had the opportunity to grab the equivalent from the Chinese system, I would not have thought twice,” Hayden said. “I would not have asked permission, I’d have launched the Starfleet and we’d have brought those suckers home at the speed of light.”

Little progress is expected on lingering tensions in the South China Sea, where China is rapidly constructing artificial islands on top of reefs claimed by several other nations, while adding weapons, harbors and military-capable runways.

China holds an ambiguous claim to about 90 percent of the sea and has attempted to regulate its airspace and waterways.

The U.S. and its allies in the region contend that sovereignty of the sea’s many islands must not be decided through the use of force, and that most of the sea must remain free to international navigation and surveillance.

On Thursday, U.S. Sen. John McCain called on the Navy during testimony to operate within 12 nautical miles of the artificial islands, saying that not doing so is “a dangerous mistake” that would imply tacit recognition of China’s claimed boundaries.

The one step forward that could occur during Xi’s trip is an agreement on unplanned air encounters between China and United States, according to analysts. Last year, the two nations agreed to a similar code between naval ships in an effort to avoid any unexpected conflict.