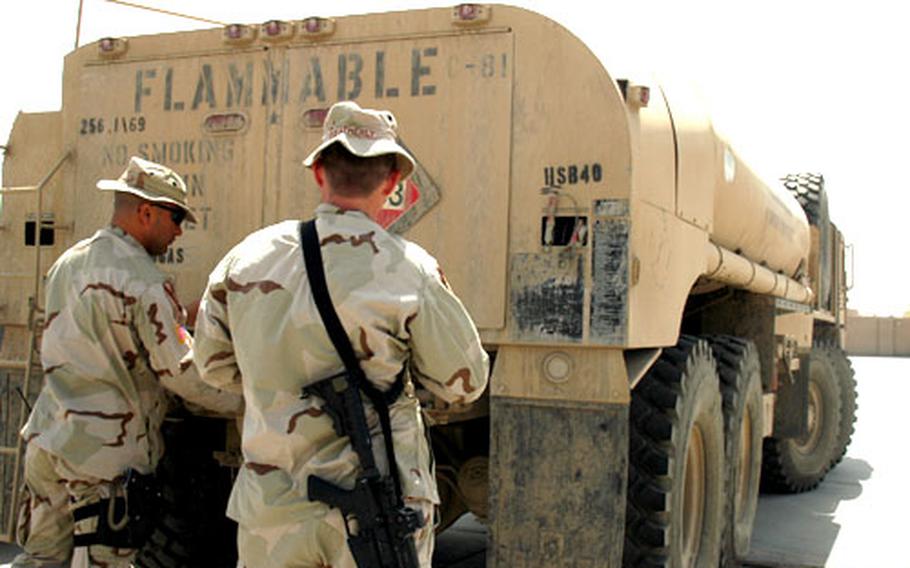 Capt. Augusto Villalaz, 35, of Lake Charles, La., left, and E5 Rock Weatherly, 44, of Perrysville, Ind., check a fuel truck on Sunday afternoon at Camp Independence. Villalaz said he learned that Iraqi officers were buying truck fuel for missions with their own money because of a delay with contacts between vendors and the Iraqi Ministry of Defense. Villalaz helped arrange for 2,400 gallons of fuel for the Iraqi soldiers he works with at the camp. But U.S. officers want the Iraqi army to become less dependent on U.S. means and might. (Teri Weaver / S&S)

Capt. Augusto Villalaz, 35, of Lake Charles, La., left, and E5 Rock Weatherly, 44, of Perrysville, Ind., check a fuel truck on Sunday afternoon at Camp Independence. Villalaz said he learned that Iraqi officers were buying truck fuel for missions with their own money because of a delay with contacts between vendors and the Iraqi Ministry of Defense. Villalaz helped arrange for 2,400 gallons of fuel for the Iraqi soldiers he works with at the camp. But U.S. officers want the Iraqi army to become less dependent on U.S. means and might. (Teri Weaver / S&S) 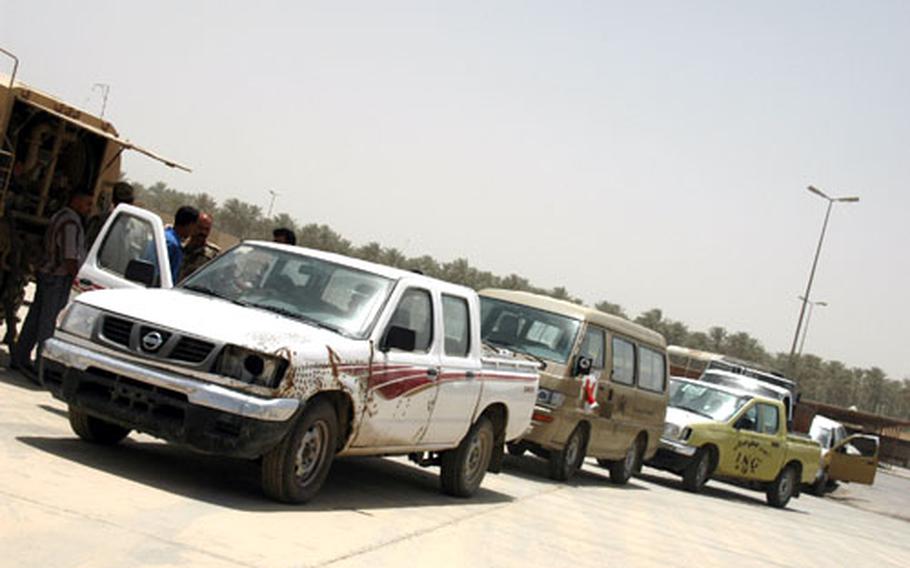 Iraqi Army vehicles line up for gas Tuesday afternoon at Camp Independence in Baghdad. The Iraqis ran out of gas for their patrols, and the U.S. offered them 2,400 gallons. (Teri Weaver / S&S)

A supply contract was caught in red tape at the Ministry of Defense, halting deliveries to the Iraqi battalion stationed at Forward Operating Base Independence, a combined U.S.-Iraq base. To keep their patrols on the streets of Amariyah, home to Haifa Street, the Iraqi officers began using their own money to buy fuel.

On Sunday, a U.S. captain stepped in and gave the Iraqis 2,400 gallons of fuel from his supplies.

The common-sense solution is frustrating to officers on both sides who want to see an Iraqi army that is less dependent on American money and military strength. That independence comes at a price, say the Iraqi officers who are struggling to keep their soldiers prepared for action.

&#8220;We fight with bad vehicles. We fight with bad flak jackets,&#8221; said Lt. Col. Alaa Al-Kafji, the English-speaking executive officer for the Iraqi army&#8217;s 1st Battalion, 1st Brigade, which ran out of fuel.

U.S. officers are also frustrated, but reluctant to step in.

Villalaz and others fear that if the Americans continue to solve problems such as the fuel shortage, Iraqi government leaders will pay less attention to their army&#8217;s needs.

&#8220;The Iraqis are looking for the future and for freedom. The homeland is everything,&#8221; Maj. Gen. Jaleel Khalaf Shawail, 1st Brigade commander, said through a translator. Jaleel, who commands hundreds of Iraqi troops in western Baghdad, has a picture of himself and U.S. Secretary of Defense Donald Rumsfeld that hangs directly across from his desk.

Iraqi commanders, including Jaleel, say they don&#8217;t have enough supplies to outfit their soldiers. Some soldiers wear flak jackets already damaged with bullets. They lack ammunition. They use Russian-made vehicles that break down in the Iraqi sun.

In the past, the Iraqis got their equipment and support from the Americans. More recently, the Iraqi Ministry of Defense is taking over that role, Iraqi military leaders say.

Iraqi commanders say part of the problem is the growing bureaucracy within their own organization. That&#8217;s why the fuel delivery was late. That&#8217;s why Haider, commander of the longest-serving battalion in the new Iraqi army, is worried about an upcoming change in guards at the Green Zone.

The 1st Battalion, 1st Brigade has been working with the Americans for two years, according to Haider. The battalion&#8217;s patrols have cleaned up Haifa Street: Once the site of frequent gunbattles, it has become safe enough for children to ride bicycles.

Haider is worried that less-experienced soldiers from outside the city won&#8217;t be able to keep car bombs and other weapons of the insurgents from getting in, dulling one of the biggest successes of the new Iraqi army.

Other changes hit closer to home. The 1st Battalion has more than 1,000 men, and Haider has lost 27 soldiers and two officers in the past two years. When the Americans were in control, the families of the fallen soldiers got paid quickly: $2,000, plus six months of pay.

Now, the mourning families come on payday but the cash isn&#8217;t always there, Haider said. One change by the Iraqi government is for the better, he said. Now the families get a year&#8217;s salary for each son or husband they lose.

The developing military, and its developing bureaucracy, has other problems, commanders say. Iraqi patrols often bring back suspected criminals and insurgents and their first holding cell is one of three outdoor cages that once were home to tigers owned by Saddam Hussein&#8217;s son Odai.

The Iraqis are under orders to keep detainees in those cages no longer than 24 hours before being transferred or released. On Sunday, eight men were in the three cells: two had been there eight days; five others almost a week. One was accused of being a grenade-throwing expert for an insurgent cell, another an accused supporter of the insurgency, according to Maj. Abul Kudar, the Iraqi 1st Battalion&#8217;s chief of intelligence.

Kudar has tried to move the men, but the jails at their next stop, another U.S.-Iraqi base only a few miles from FOB Independence, are full, his commanders keep saying.

Still, the cages are in better shape than they were a few weeks ago.

Then, more than 50 men were crowded into the cells. Their sewage was overflowing from a nearby pit, and they got no exercise because the nearby area would have given them a clear view of the camp, said Lt. Bill Barthen, one of about 20 U.S. officers at Independence who advise the Iraqis.

Kudar said he reported the conditions every week to his superiors, but nothing happened. What did it take to get the conditions changed? A visit from an American general, Kudar said.

&#8220;A month ago, a Pentagon general came here and [I] asked for help,&#8221; Kudar said. The next day, the order came to keep the detainees no longer than 24 hours and to clean up their holding area.

Kudar, Alaa and the others keep the paperwork and the requests for more resources going up the chain, they said. Then they wait.