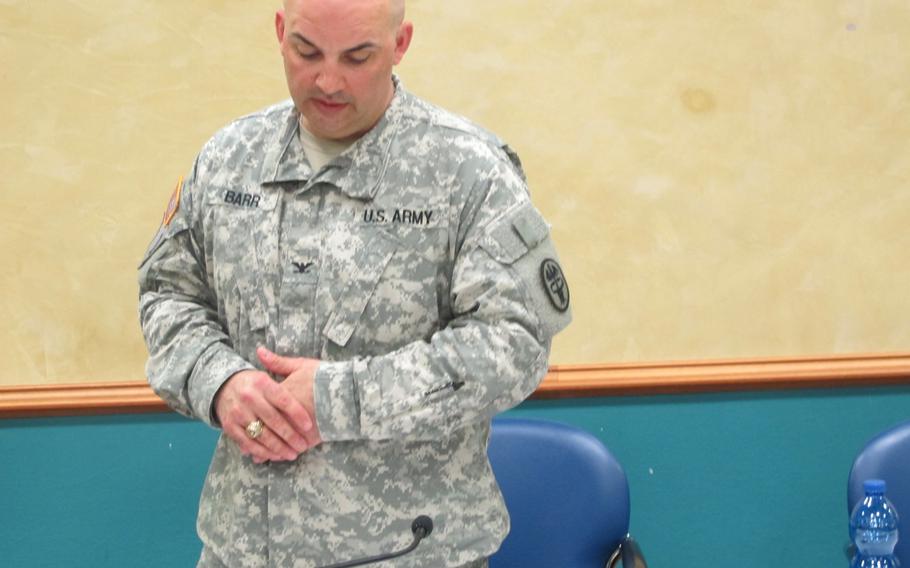 Col. Andrew Barr, commander of the Vicenza garrison's health center said at a meeting on Wednesday, April 2, 2014, he had no choice but to abruptly reduce civilians' access to health care at the center. ( Nancy Montgomery/Stars and Stripes)

Col. Andrew Barr, commander of the Vicenza garrison's health center said at a meeting on Wednesday, April 2, 2014, he had no choice but to abruptly reduce civilians' access to health care at the center. ( Nancy Montgomery/Stars and Stripes) Vicenza's Army Health Care Center, built for almost $48 million in 2010, will cease doing same-day surgery and providing obstetrical and maternity care in June and has significantly decreased access to routine care to some 3,000 Defense Department civilians. ( Nancy Montgomery/Stars and Stripes)

VICENZA, Italy — An abrupt disruption to civilians’ access to care at Vicenza’s Army health center two weeks ago has left people essentially without care and raised questions about how thousands of civilians will receive medical care in the future, those who attended a charged public meeting Wednesday told health center commander Col. Andrew Barr.

Barr apologized repeatedly for the way in which civilians who had long been able to make appointments at the center were told recently that the procedure had been changed: with a Facebook message and a short, hasty list of local Italian physicians who might be available, including one who turned out to be an acupuncturist.

Barr insisted he’d had little choice when he learned that active-duty troops and their families, who have the highest priority for health care under Tricare, the Army’s health insurer, were being turned away because civilians were calling early and snatching up appointments, he said.

“Beneficiaries were being put on hold and not getting an appointment,” Barr said.

Many civilians at the Wednesday meeting were not mollified, however.

“One of our teachers tried to make an appointment. She called five different Italian doctors. They wouldn’t see her without a European Union medical card,” said Lorrie Vallone, who was at the meeting representing Vicenza middle school teachers.

The teacher also had repeatedly called the center, as instructed on Facebook, attempting — and failing — to get a same-day appointment there.

“Her child was very sick and she couldn’t be seen at the clinic or on the economy,” Vallone said. She and her child ended up at the local emergency room at San Bortolo Hospital, Vallone said.

The teacher’s experience is an example of a dramatic change for civilians in the way the center does business in an Army of tightened budgets, reduced personnel and diminished resources.

Defense department civilians such as teachers, GS workers, contractors and others covered by health insurers other than Tricare, are seen on a “space available” basis at military hospitals and clinics, after a number of other groups with higher priority — troops, their families, retirees.

A decade ago, space was routinely available. But several years ago, the appointments at U.S. Army health clinics in Germany became hard to get; civilians were forced to see local doctors.

About the same time, the Army began shutting down maternity and same-day surgery units, sending everyone who needed those services, including soldiers, to local doctors or the Army hospital at Landstuhl.

Vicenza, however, maintained those services until recently. Vicenza’s birthing center, which opened to great fanfare in 2005 after years of complaints about local Italian maternity care and the language barrier, is closing in June, along with same-day surgery.

“We’ve been very fortunate in Vicenza for a long time,” Barr said.

Barr said an increase in troops and their families, along with no increases in staff, meant that some 3,000 Vicenza civilians would now have to be more reliant on local Italian medical providers, though many of them speak little English and require payment upfront.

An exception is civilian babies and children needing immunizations, who will continue to be able to receive care at the center, which opened in a new, $48 million building on Caserme Ederle less than four years ago.

According to the center, civilians with acute issues such as flu may still call for a same-day appointment for themselves or their children, starting at 11 a.m. If there are any appointments left before the center closes at 4:30 p.m., they will be seen.

“There should be no doubts. The message is we take care of civilians (for acute issues) ... when space is available,” Barr said.

He declined to say how many appointments might be available for civilians with acute issues on a given day, and people at the meeting were skeptical.

“The sense of people about the call-in is that it’s a de facto ‘you can’t be seen,’” Stephen Salerno, a civilian lawyer, told Barr. “Just come out and tell us, ‘You can’t be seen.”’

An estimated 500 civilians with chronic conditions — diabetes, asthma and others — who saw center doctors are to be “transitioned” to local doctors, Barr said, and won’t be seen for tests, follow-up or telephone consultations at the health center. Neither will civilian women needing pap smears or other routine preventive health care.

“It is a reduction in service whether you want to admit that or not,” Vallone said.

The meeting made clear that a host of issues resulting from the change have yet to be addressed. Barr was asked what people taking medications not available in Italy would do. Such patients include a significant number of children on medication for Attention Deficit Hyperactivity Disorder. Other questions concerned how to coordinate care and records between U.S. health providers and Italian doctors, and refilling drug prescriptions for people who will shortly run out of their medications.