Cutlass Express exercise brings together sailors from US, Africa 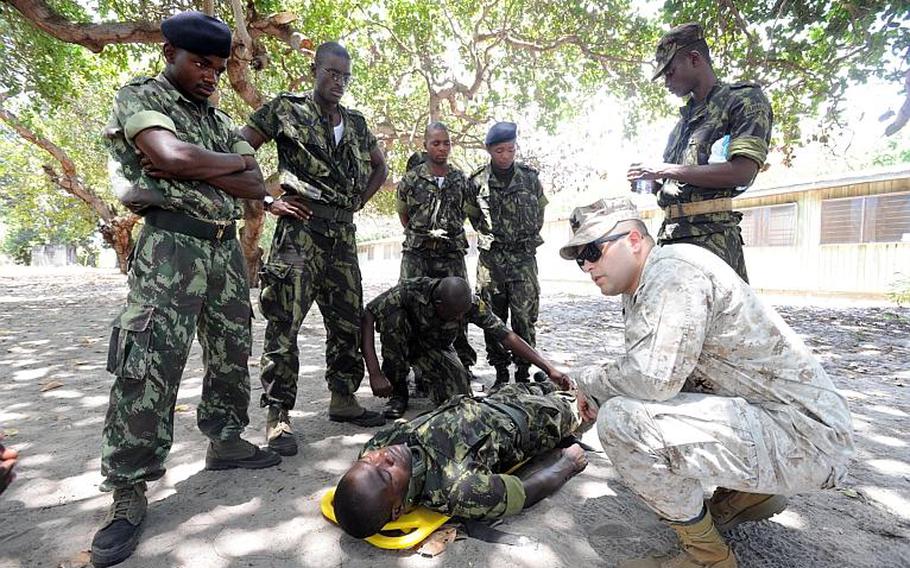 The U.S.-hosted exercise this week aims to get people from Djibouti, Mauritius, Tanzania, Mozambique, Seychelles and Uganda to work together against seafaring criminals.

This is the second year the U.S. Navy has hosted the exercise, Cutlass Express. Similar exercises are scheduled in West Africa, the Gulf of Guinea and the Mediterranean Sea in 2013.

NATO launched its anti-piracy initiative, Operation Ocean Shield, in late 2008. But as piracy attacks decline, NATO leaders are looking to African nations to increasingly pool their limited naval capabilities and police their own waters.

&ldquo;It&rsquo;s a vast area and I don&rsquo;t believe with the many ships that cross the Indian Ocean into the Gulf of Aden that any nation can do it on its own,&rdquo; said Dutch Navy Commodore Ben Bekkering, commander of the NATO counter-piracy task force.

In all, 800 people are participating in the exercise, including 48 sailors representing the naval boarding teams of five African nations and 35 U.S. Navy personnel, said Lt. Anthony Blaine, an exercise planner for the U.S. Navy's 6th Fleet area of responsibility in Africa. The exercise ends Thursday.

Pirate attacks along Africa&rsquo;s east coast have declined sharply, but Bekkering said that trend is tenuous and mantaining it requires maintaining maritime pressure.

There have been 252 piracy attacks and 26 hijackings worldwide this year as of Oct. 27, according to the International Maritime Bureau, which tracks reported incidents. Of those, 71 piracy incidents were linked to Somalia, a sharp decline from 2011, when Somali pirates attacked 237 ships.

Somali pirates have become increasingly brazen and organized, setting up mother ships along the East African coast to hijack small fishing vessels and then using those to attack larger ships near Tanzania, Seychelles, Mozambique and Yemen, according to the maritime bureau.

&ldquo;They want to make money,&rdquo; Bekkering said. &ldquo;The pressure we are applying on them at this moment is making their business model, as you might call it, shake, and they are finding it difficult to make a profit, so if the pressure lets off they will return.&rdquo;

The U.S. Navy, which has vowed to strengthen its presence in the Pacific Ocean, also hopes to soon redistribute its shrinking resources.

&ldquo;We can&rsquo;t patrol the whole world and be the police of the world,&rdquo; said Blaine. &ldquo;The goal is to have a smaller presence with stronger partners &hellip; It&rsquo;s certainly expensive to be here and resources are always getting slimmer.&rdquo;