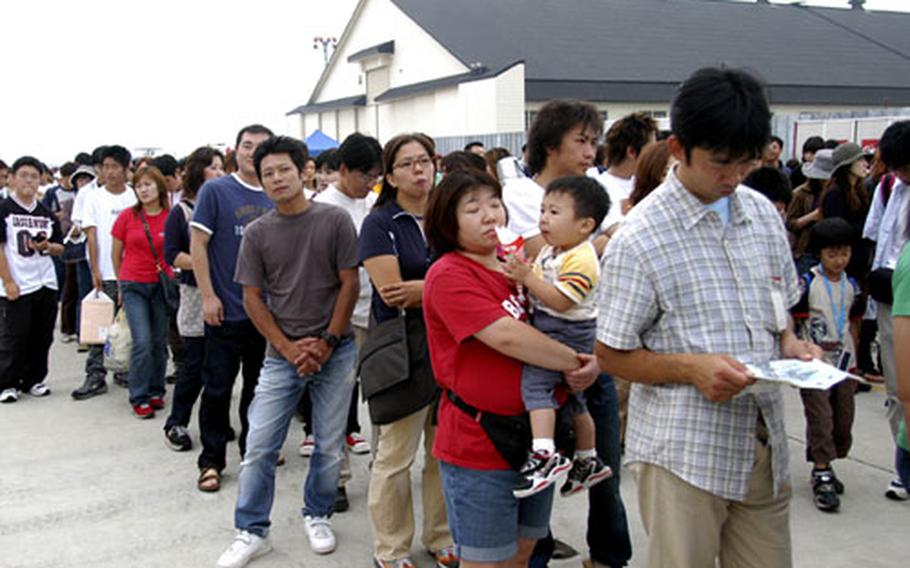 Japanese have a yen for Anthony’s Pizza, whose booth attracted long lines at a 2004 Misawa festival. (S&S photo)

The base received a call from a customs official earlier this month reminding them that the status of forces agreement restricts the consumption of tax-free base food, said a Yokohama Customs spokesman Friday.

NAF Atsugi spokesman Brian Naranjo said the base advises Japanese who come on the premises during twice-a-month open houses to buy only what they can consume on base.

He said some people might ignore that but those cases are rare.

Anthony&#8217;s Pizza on base costs about $12 for a large, 16-inch pizza. Comparatively, a Japanese pizza from the popular Pizza-la delivery services costs about $22 for a 10-inch pizza and $35 for a 14-inch pizza. A five percent sales tax also is charged on food in Japan.

The sight of Japanese people carrying pizza boxes around U.S. military bases is a common one on the open-base &#8220;friendship&#8221; days that usually occur a few times a year. Customs officials overlooked this in the past due to the infrequency of the open-base days, the customs spokesman said.

But NAF Atsugi started inviting the community more often &#8212; every other Saturday since mid-September &#8212; and needed a reminder, the official said.

The base was reaching out to the community in the spirit of friendship, not to sell pizzas, Naranjo said.

Naranjo added that the base wants to continue reaching out to the community and would like to open other areas of the base, like the movie theater. But base officials will have to be creative in planning to not offend the host country, he said.