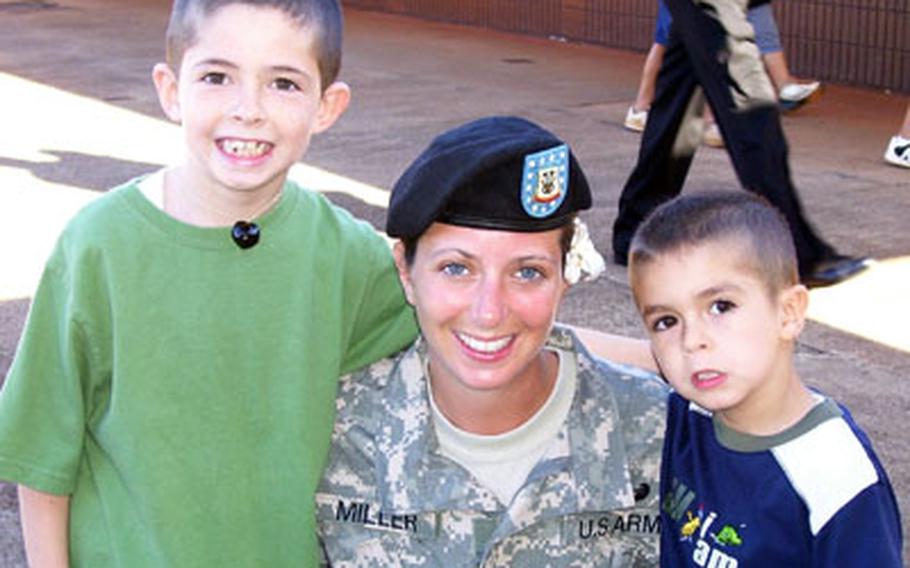 WASHINGTON &#8212; When Staff Sgt. Jessica Tolbe returned from Iraq in February, she looked forward to catching up on lost time with her sons.

But when she went to pick them up from her ex-husband, she was blocked from seeing them by a court order issued while she was still overseas.

House lawmakers for the last few years have been fighting unsuccessfully for better protections for military parents who are deployed and again this summer passed legislation to prohibit courts from making custody changes while a servicemember is overseas.

But it&#8217;s unlikely to become law, congressional officials said, because of the Defense Department&#8217;s continued opposition to the measure.

Meanwhile, family law experts say they continue to see hundreds of cases in which troops finishing combat rotations return home to angry custody battles and unsympathetic judges, who see long tours overseas as an obstacle to providing a stable home for children.

&#8220;The court system is still stacked against members of the military who deploy,&#8221; said Mathew Tully, whose legal practice specializes in military rights cases. &#8220;A little common sense is coming into the system now, but it is still horrible.&#8221;

Attorneys for Tolbe&#8217;s ex-husband say they&#8217;ll argue in court that his petition for custody of their sons &#8212; 8-year-old Jackson and 10-year-old Jordan &#8212; has nothing to do with her time deployed, instead centering on matters of stability and who can best provide for the children.

But Tolbe believes the courts in Hawaii and Tennessee never would have allowed the moves if she was in country to fight against them.

The military does not keep statistics on how many troops are involved in custody fights, but Army records show more than 20,000 troops in the ranks last year were single parents.

That&#8217;s nearly one in every 16 soldiers whose off-duty hours are spent raising children alone, and in some cases fighting with former spouses about how best to do it.

Two years ago, Congress extended parts of the Servicemembers Civil Relief Act to military child custody cases, prohibiting judgments against parents while they are deployed and allowing more time for returning troops to respond to such challenges.

But those changes don&#8217;t always include legal challenges like the one Tolbe faced, where a temporary custody order was issued and amended. Tully, himself a Guardsman, said another hurdle is that different states have different standards for custody cases, and not all of them are military friendly.

Rep. Mike Turner, R-Ohio, has pushed for the last four years for rules that would reset any temporary custody orders upon a servicemember&#8217;s return to the States, in order to protect military parents&#8217; rights.

Language that would forbid courts from altering any existing custody agreement while a military parent is deployed and set an end for temporary orders was included in the House version of the 2010 Defense Authorization Bill.

But similar proposals have been ignored by the Senate for the last four years. Turner said that&#8217;s due to opposition from the Defense Department officials, who have told lawmakers that it should be an issue handled by individual states.

But at the Pentagon, officials say they&#8217;ve taken no stance on the matter, although they have categorized the number of families affected by deployment custody battles as a small fraction of the total force.

This spring, Turner confronted Gates on the issue during a House Armed Services Committee hearing, and received a promise that he would confirm that military officials aren&#8217;t blocking the bill. Months later, Turner said he still hasn&#8217;t received any response or support for the proposal.

A long fight ahead?

In August, Turner hosted a rally on Capitol Hill to build support for the proposal, noting that he&#8217;s still hopeful Congress can get the measure passed this year. With him was Kentucky National Guard member Lt. Eva Slusher, who spent two years and $25,000 to regain custody of her daughter after a post-deployment legal fight with her ex-husband.

Slusher said she gets several letters a week from parents in similar situations looking for sympathy and advice. Looking back now, she still can&#8217;t see any changes that would have prevented her from facing a custody fight.

Before deploying, she got a court order mandating her daughter&#8217;s time with her ex-husband was only a temporary arrangement. Courts still opted to leave the teen with her father for two years while the process dragged on.

Tolbe hopes her own fight won&#8217;t take as long as Slusher&#8217;s. Before she returned from her latest deployment, Tolbe&#8217;s ex-husband, a soldier himself, started making legal moves to get full custody of the boys. In March, Tolbe agreed to a temporary order allowing her sons to stay in Tennessee through the end of the school year, but vowing to fight after that.

Now more legal delays will have them start the 2009 school year there as well. Her attorneys say Tolbe likely won&#8217;t get a chance to lay out her arguments in court until December, because a Tennessee judge recently declined to fast-track the case.

Until then, she retains some visitation rights and could get temporary custody again if her ex-husband deploys. But she&#8217;s also facing the possibility of another overseas deployment in the near future, and could have to give up the boys again even if she wins her court case.

She has considered filing a family care plan to make herself nondeployable, but such a move would effectively end her military career.