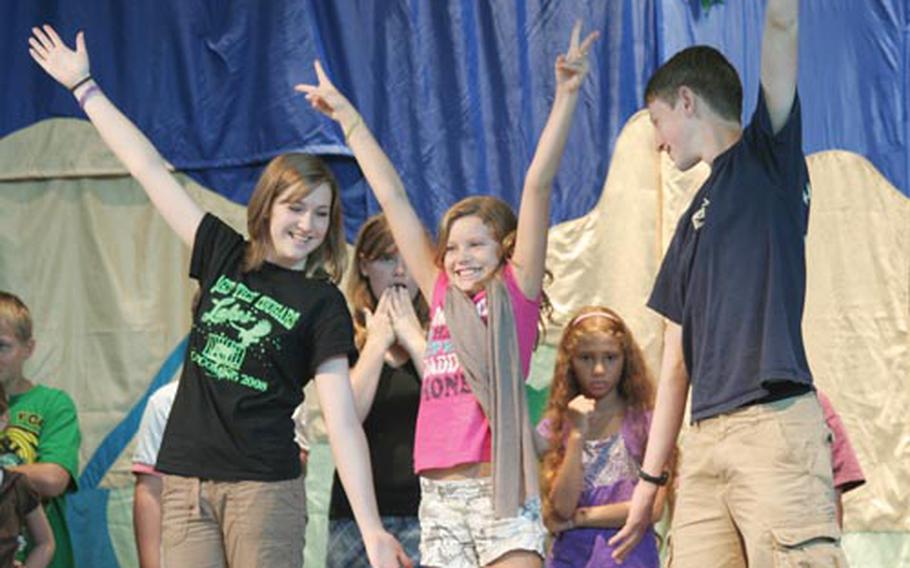 Below left and right: Jeremiah Henricksen, a director with the Missoula Children’s Theater, plays a leprechaun alongside NAS Sigonella dependents on performance night Saturday at the school theater on base. (Matt Knight / Courtesy of the U.S. Navy)

Below left and right: Jeremiah Henricksen, a director with the Missoula Children’s Theater, plays a leprechaun alongside NAS Sigonella dependents on performance night Saturday at the school theater on base. (Matt Knight / Courtesy of the U.S. Navy) 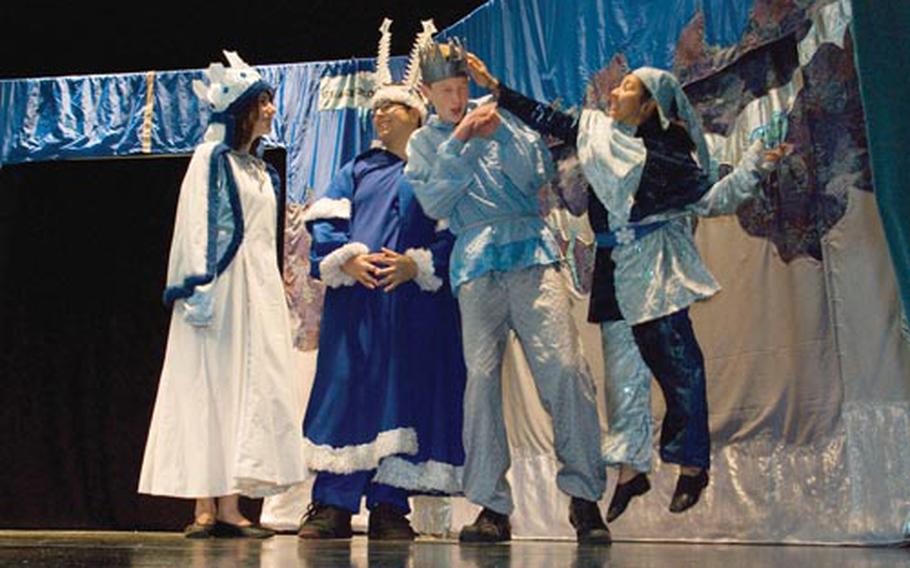 Scenes from the performance of “The Princess and the Pea” include characters such as “Prince Ice Man,” “The Princess, “The Pea,” “Storm Queen,” “Storm King” and “Jack Frost.” (Matt Knight / Courtesy of the U.S. Navy) 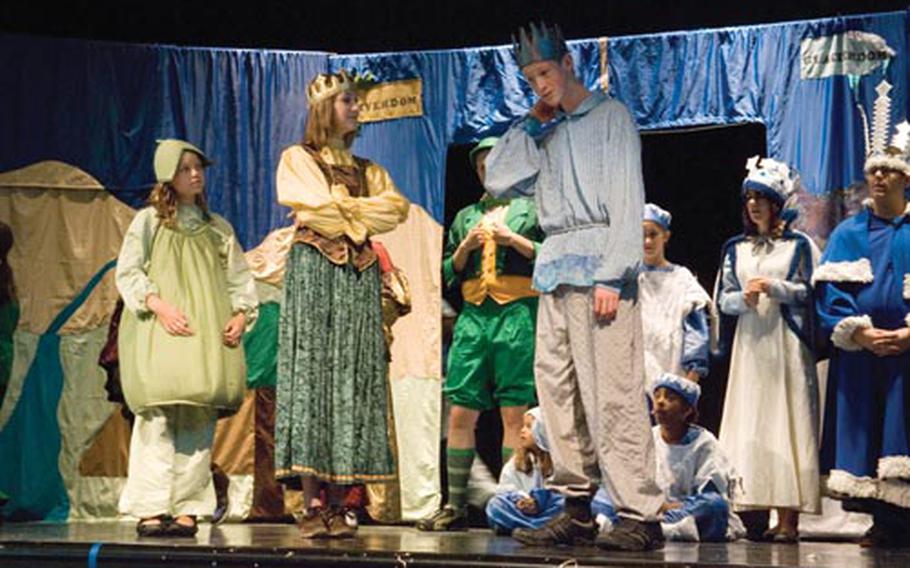 The play featuring dependents 6-18 years old from Naval Air Station Sigonella was the culmination of a weeklong camp run by the Missoula Children’s Theater. After five days of rehearsals, the youths sharing an interest in the performing arts, entertained the public at the base. (Matt Knight / Courtesy of the U.S. Navy)

With the help of the Missoula, Mont., Children&#8217;s Theatre, the actors, ages 6-18, put together an hourlong musical production of Hans Christian Andersen&#8217;s "The Princess and the Pea," complete with costumes, sets and props &#8212; all done in just five days from the first auditions to final performance.

Although the theater group has worked with children at U.S. bases across Europe for years in similar fashion, it was the group&#8217;s first visit to Sigonella, base and theater officials said.

"Sigonella is an isolated community in orange groves on an island far from other bases, so I think having Missoula is just another tool that has helped us to unite the community," said Melanie Resto, youth activities director for Morale, Welfare and Recreation at Sigonella.

"I thought this would be something great to introduce to the Sigonella community. I would say it has been very well received."

Erica Zintek and Jeremiah Henriksen from the theatrical group started working with the children Aug. 24, and after five days of 4&#189;-hour rehearsals and a dress rehearsal, the children performed the musical Saturday at the school theater on base.

The production included 46 child actors. Henriksen also had a role. Zintek helped behind the scenes along with four children whose jobs included make-up and making sure the actors were getting in the right costumes for each scene.

Zintek described the play as a fairy tale that the children&#8217;s theater tweaked to make it fit its program.

The children had to audition, but the focus wasn&#8217;t on their acting skills; it was on whether they could be heard clearly, be expressive and follow directions, Henriksen said.

If the actors are loud, expressive, and can listen to directions, Zintek said, she thought they would do well in the play.

"The acting is kind of a secondary goal. Our goal is to teach the kids life skills," Henriksen said.

"One of the main things they learn is teamwork," Zintek said. "They are learning to work together as a team and that it is not always just about them."

One of the play&#8217;s young actresses, Braylee Gilbert, 11, gave the experience a thumb&#8217;s up, even though her mother, Miki Gilbert, said she was nervous about her daughter&#8217;s role as one of the princesses.

Braylee had about 10 lines as one of the "phony princesses" vying for the prince of Glacierdom&#8217;s hand in marriage. The prince&#8217;s efforts to find his bride are sabotaged by his devious cousin, Jack Frost.

"I&#8217;m just hoping not to mess up," Braylee said before the performance.

"I get to be a brat," she said in describing what she liked about her role. "The most challenging part is knowing my lines."

Another plus of the experience, Braylee said, is that she got to know other children before her classes began at Stephen Decatur Middle School and High School. Classes started this week.

Miki Gilbert said she is amazed with how far the children came so fast.