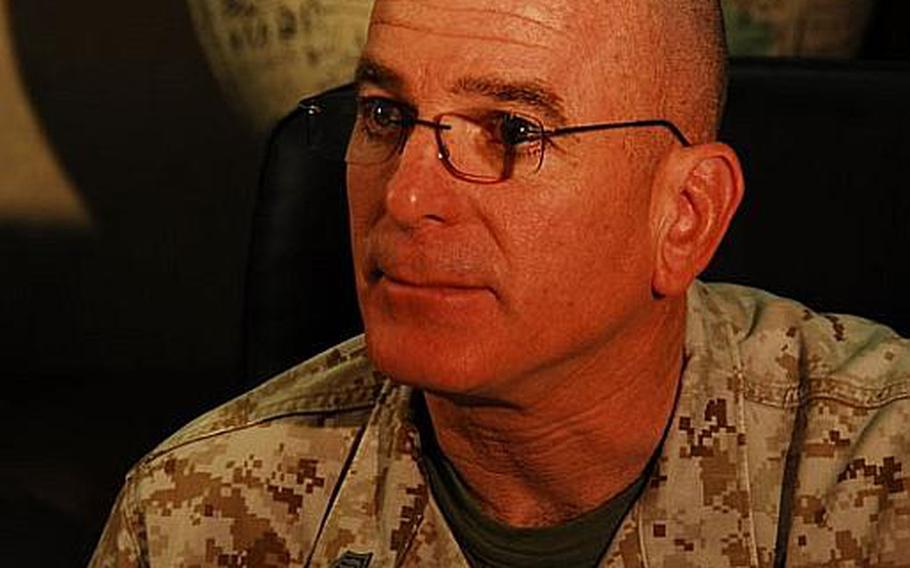 SEOUL &mdash; The senior enlisted adviser for the Joint Chiefs of Staff said Friday that the 7-month-old off-post curfew was the issue raised most often by troops he spoke with this week in South Korea.

&ldquo;It&rsquo;s an ankle-biter sort of a concern, but it&rsquo;s important with them,&rdquo; Marine Corps Sgt. Major Bryan Battaglia said during a media roundtable at U.S. Army Garrison Yongsan. He added that &ldquo;those few who have brought the curfew rule up&rdquo; have completely understood and been more likely to support the measure once it was explained to them.

&ldquo;This (having a curfew) is nothing new to the U.S. Armed Forces,&rdquo; he said. &ldquo;It just may be a new local policy to a young servicemember.&rdquo;

U.S. Forces Korea commander Gen. James Thurman enacted the curfew in October following several high-profile incidents involving U.S. troops, including two where soldiers were accused of raping South Korean teenagers. One of those soldiers, Pvt. Kevin Lee Flippin, was convicted and sentenced to 10 years in prison for brutally raping a teenager in her Dongducheon boarding house room. The second soldier, Pvt. Kevin Robinson, is now on trial for raping a 17-year-old in Seoul.

Battaglia, who has held the JCS position for six months, arrived in South Korea on Monday and spent the week meeting with troops across the peninsula as well as with U.S. and South Korean military leaders.

He called the curfew a readiness measure.

&ldquo;We want troops to have the posture and stance that if they are needed at a moment&rsquo;s notice, they are ready and they are not in a position where they are just rolling in from an all-night party, if you will,&rdquo; he said.

&ldquo;This is a very volatile situation on this peninsula right now,&rdquo; said Mahoney, who is part of a group of military leaders who make recommendations to the USFK commander during quarterly reviews of the curfew.

&ldquo;All those considerations &mdash; the political state on the peninsula, the amount and frequency of misconduct &mdash; all sorts of factors go into this,&rdquo; Mahoney said.

USFK troops were previously under a curfew that former commander Gen. Walter Sharp rescinded almost two years ago. When Thurman reinstated the curfew last fall, he said he was doing so to &ldquo;assess current conditions, mission requirements, and potential force protection concerns.&rdquo;

But the new curfew has had its share of unintended consequences.

Some South Korean bar owners near military installations have complained about a loss of business since the curfew was enacted, and the number of on-post drinking-related incidents on the peninsula increased by 53 percent during the first fiscal quarter of 2012, roughly the first three months the curfew was in place, compared with the preceding quarter.

Additionally, not all servicemembers have been playing by the general&rsquo;s rules. A high number of curfew violations prompted Thurman to issue a memo in February calling out leaders for a lack of self-discipline after more than 50 officers and noncommissioned officers were caught violating an off-post curfew in the first quarter of fiscal 2012.

While speaking with reporters about a wide range of military initiatives, Battaglia said he was impressed by the preparedness of USFK troops, and the military&rsquo;s close relationship with South Korean forces. He also addressed efforts to improve the transition programs for outgoing servicemembers, which he said are &ldquo;old, dated and for the most part ineffective.&rdquo;

To change that, the military is revitalizing transition programs that will help, if not require, troops to start planning for their separation as early as a year in advance, Battaglia said. Such programs will focus on enlisted troops and help them develop skills as varied as applying for jobs or starting their own business.

The Army Times reported last month that all active-duty soldiers will be required to participate in services helping them transition to civilian life. Army Secretary John McHugh ordered the change last year, and directed that transition processing begin at least 12 months before a soldier leaves active duty, the newspaper reported.

A Marine Corps career planning pilot program that has been in place for several months has been successful and similar programs will be tried in other services, Battaglia said.

&ldquo;We are working pretty vigorously to make this right,&rdquo; he said.