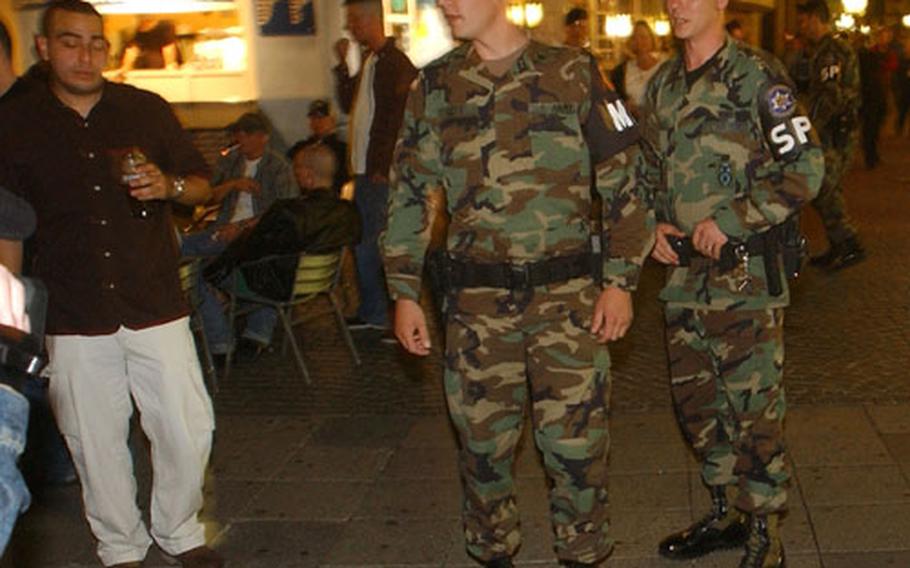 From right, Air Force Staff Sgt. Christopher Casey and Army Staff Sgt. Jessie Goff, respond to call of a disturbance while on patrol of a bar district with German Polizei officers in Kaiserslautern, Germany, on Friday night. The patrolmen are part of the 569th U.S. Forces Police Squadron in Vogelweh, Germany. (Raymond T. Conway / S&S)

So much so that German police decided to invite Casey&#8217;s unit, the 569th U.S. Forces Police Squadron, to join them in the foot patrols on Friday and Saturday nights.

The 569th, which always patrols off-base, is in charge of a region about the size of Rhode Island, stretching from Pirmasens to Frankfurt. At its heart is Kaiserslautern&#8217;s restaurant and bar district, where dozens of watering holes and dance clubs attract the young and the reckless.

&#8220;We wanted to be more proactive and show a presence,&#8221; said Master Sgt. Leo Birch III, the squadron&#8217;s noncommissioned officer-in-charge of law enforcement and security.

The joint German-American patrols have several benefits. The U.S. military police are there to translate when Americans get in trouble, and will handle most of the cases in which Americans are involved. It makes it easier for the Germans and Americans to share case information and track crime.

And, so far, it appears to be working.

From April to June this year, the squadron handled 46 drunken-driving cases; 78 assaults or domestic violence cases; nine sexual assaults; and 142 larceny cases, Birch said. After the foot patrols started, between July and August &#8212; albeit a month shorter time period &#8212; the unit handled 18 DUIs, 37 assaults or domestic violence cases, one sexual assault and 107 larcenies.

Foot patrols are used on occasion near other Air Force bases in Europe. Security forces squadrons at RAF Lakenheath and RAF Mildenhall, England, periodically patrol with the constabulary in areas frequented by off-duty troops, base officials said.

Air Force police have long patrolled the bar zones where troops are stationed in Korea.

And the Navy routinely sends teams of sailors on &#8220;shore patrol,&#8221; to walk bar districts to deter shipmates from getting into trouble or to help those who might have had too much to drink.

Friday night&#8217;s town patrol in Kaiserslautern was a little unusual. An American Forces News reporter&#8217;s bright camera lights gave the patrol the look of an on-location movie shoot. That seemed to fascinate drunken passers-by, who mugged for the camera and made inane remarks to the police.

A few partiers, obviously American by their lingo, T-shirts and baseball caps, heckled the police, then quickly scurried away.

Casey and Goff, a National Guard soldier with the 2nd Battalion, 115th Field Artillery Regiment from Lexington, Tenn., kept a steely front. They said they get a lot of guff from drunken U.S. troops, even when the TV cameras aren&#8217;t around.

One man approached the group to complain about Americans&#8217; bad behavior downtown.

German police officer Christoph Mauer, night duty officer for the Polizei&#8217;s downtown station, said Americans are only part of the problem. Germans, Russians and Turks make their share of trouble as well. Drinking and drug use are the catalysts, Mauer said.

One obviously inebriated airman, who was wearing an earring and had three pretty girls on his arm, stopped to have a chat with the military police.