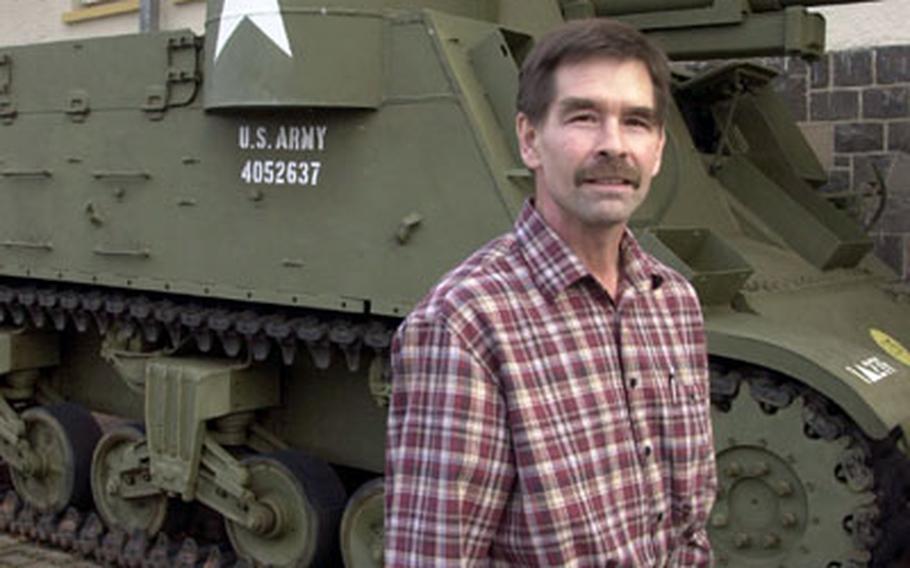 Steve Ruhnke is spending a lot of time around old tanks as he makes the transition from an exhibit specialist at the cavalry museum at Fort Riley, Kan., to head curator at the 1st Armored Division’s museum. But at Baumholder, the future is digital, Ruhnke says. (Terry Boyd / S&S)

BAUMHOLDER, Germany &#8212; As the battlefield has shifted from Concord to the latest anti-insurgencies, military museums and their curators have been there to document it all. At the 1st Armored Division Museum in Baumholder, new curator Steve Ruhnke is writing the next chapter in the division&#8217;s history.

Ruhnke hopes to open the Operation Iraqi Freedom gallery next spring, with some new twists on old Army traditions. Instead of the soldier&#8217;s letter home, 1st AD soldiers already have donated digital material including video clips and still photos that will help tell the story of Operation Iraqi Freedom, the division&#8217;s second deployment to Iraq since it moved to Germany in 1971.

One of the more unusual donations is an audio recording of the crew of an M-3A2 Bradley fighting vehicle in combat during the conventional ground war phase of the Iraq war, Ruhnke said.

One soldier donated a digital copy of his diary.

&#8220;What&#8217;s kind of hard is that sometimes we don&#8217;t see the historical significance today,&#8221; Ruhnke said. But 100 years from now, historians will come to the museum searching for keys to understanding 21st-century military life just as they came to him at the cavalry museum, trying to piece together an accurate picture of the early days of the U.S. military.

Another complication is that curators have different standards than laymen for what they believe will be of interest to future generations.

What he doesn&#8217;t need is one more AK-47 or even an old Iraqi tank found on the side of the road, Ruhnke said. What he does seek are artifacts &#8212; American and Iraqi &#8212; with documented provenance to specific units, specific places and specific battles that help document the 1st AD&#8217;s role in OIF.

Ruhnke arrived in May as the new curator, replacing Dan Peterson, who transferred to the 101st Airborne Division Museum at Fort Campbell, Ky.

Ruhnke, a native of Junction City, Kan., has a degree in archaeology and anthropology from Kansas State University. Before coming to Germany, he had been assistant curator and exhibit specialist at the U.S. Cavalry Museum at Fort Riley, Kan., for 20 years.

An authority on American cavalry units and figures from his years at Fort Riley, Ruhnke says his new challenge is to get up to speed on the 1st AD.

His museum has a number of significant pieces including examples of some of the rarest American tanks and self-propelled howitzers, including a pre-World War II M3A3 Stuart tank.

&#8220;That one here came from Haiti, of all places,&#8221; possibly an obsolete weapon the United States sold after World War II, Ruhnke said.

In addition to a dozen tanks, halftracks and howitzers, about 10,000 visitors annually see more than 3,500 items ranging from American, Russian and Iraqi infantry weapons to vintage motorcycles, and may seek access to thousands of documents.

To tell the 1st AD&#8217;s contemporary story, the Baumholder museum will add more modern interactive displays &#8212; such as allowing visitors to select from a number of audio and video clips &#8212; to its static displays of uniforms, weapons and, of course, armor through 60 years, Ruhnke said. In addition, he&#8217;d like to do more temporary exhibits highlighting the histories of different 1st AD battalions.

However, the museum is, along with Baumholder itself, on the bubble as the Pentagon plans to relocate the two forward-based divisions, the 1st AD and the W&#252;rzburg-based 1st Infantry Division back to the United States.

The 1st AD museum is one of perhaps 50 military museums under the Center of Military History, Bigelow said. There are museums for most branches, such as the Patton Museum at Fort Knox, Ky., for armor and the cavalry museum at Fort Riley, down to the regimental level, he said. Changes over the next decade, including plans to restructure forces overseas and the opening of the National Museum of the United States Army, schedule for 2009, will lead to changes at some military museums.

But most will survive, Bigelow said. The national museum is for honor and remembrance, while museums for divisions and branches, such as the 1st AD museum, are for training, education and outreach, he said.

&#8220;We try to put such museums where there is the greatest number of soldiers, but when soldiers move, sometimes there isn&#8217;t a place to relocate.&#8221; 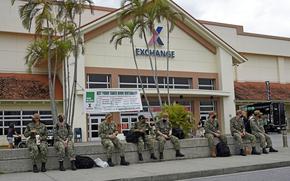