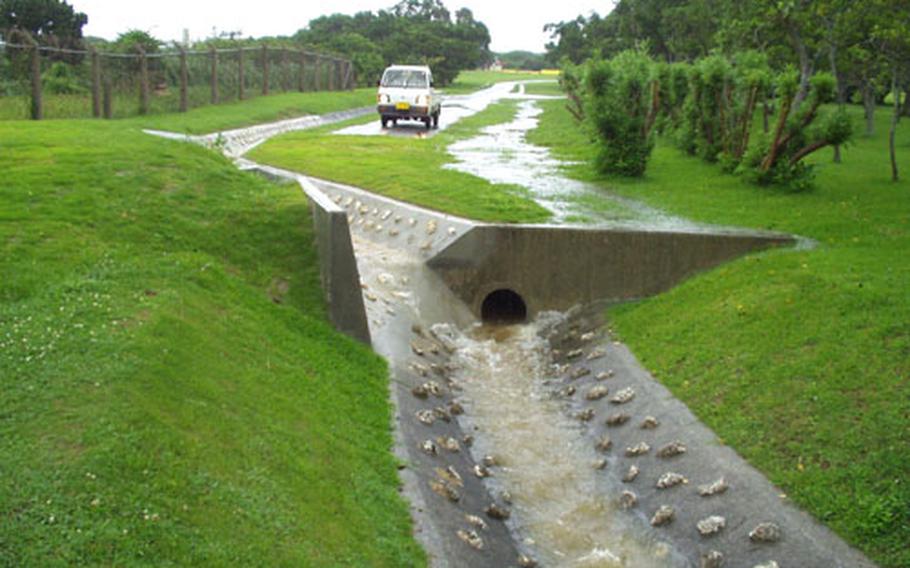 Before this culvert was installed along the Marine Corps Air Station Futenma baseline, water would run into a local elementray school&#39;s basement. (Courtesy of U.S. Marine Corps)

Before this culvert was installed along the Marine Corps Air Station Futenma baseline, water would run into a local elementray school&#39;s basement. (Courtesy of U.S. Marine Corps) 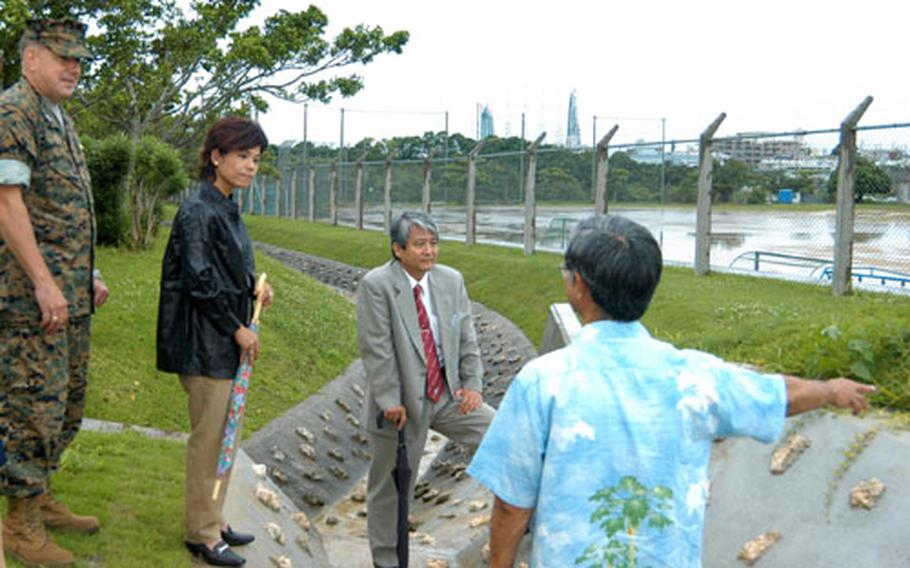 Col. Richard Leuking, commander of Marine Corps Air Station Futenma, left, listens with base community relations specialist Elana Takaho and Hiroshi Higa, director of the Military Affairs Office of Ginowan City, while a representative of the Marines&#39; Facility Engineering Division explains how building a drainage ditch relieved a floding problem at a city elementary school bordering the base. (Courtesy of U.S. Marine Corps)

GINOWAN, Okinawa &#8212; Sometimes, instead of a wall, it takes a good culvert to make good neighbors.

Ginowan Mayor Yoichi Iha, perhaps best known for wanting to close Marine Corps Air Station Futenma as soon as possible, recently thanked the base commander for constructing a culvert on base property, which solved a flooding problem at an elementary school just outside the Futenma fence line.

&#8220;It is indeed a pleasure for us to develop real friendship between MCAS Futenma and Ginowan City,&#8221; Iha wrote in a June 9 letter. &#8220;In particular, I would like to appreciate the completion of the drain enforcement construction to prevent rainwater from flooding into the playground of the Futenma Daini Elementary School.

&#8220;It was really thoughtful and appropriate work you&#8217;ve done,&#8221; Iha wrote, noting Col. Richard Leuking acted to build the culvert immediately after a meeting between base and city officials in February.

The Marine base lies in the middle of urban Ginowan. The bilateral Special Action Committee on Okinawa tagged it in 1996 to be closed within seven years if an alternate site for Marine operations could be found on Okinawa.

The plan was mired in political infighting for years until Japanese and Okinawan officials agreed to build a new airport in the waters off rural northeastern Okinawa. Iha was elected mayor on an anti-base platform, pressing to have the facility closed as soon as possible.

&#8220;Other than that, though, we remain on pretty friendly terms,&#8221; Leuking said Friday. &#8220;And when I listened to the problem the school was having and saw pictures of the flooding that would happen after a heavy rain &#8212; it looked like a waterfall going through that playground &#8212; I immediately agreed to find a fix for the problem.&#8221;

&#8220;Rainwater had been a problem at the Futenma Daini [No. 2] Elementary School whenever heavy rain fell,&#8221; said an official of the city&#8217;s military affairs office. The city had asked the Defense Facilities Administration Agency to correct the draining problem.

&#8220;But the process was taking too long and just not getting anywhere,&#8221; he said. &#8220;So the issue was brought up by Mayor Iha and Marine Corps officials responded immediately. We believe that trust relations on personal bases between the city and base are very good.&#8221;

The problem dates to 1995, Leuking said, when the base gave land for a playground for the school but no provision was made to provide adequate drainage.

&#8220;Whenever we had big rain, a huge amount of rainwater used to run into the school building, flooding the basement,&#8221; said the school&#8217;s vice principal, Harumi Chinen.

She said she photographed rainwater overflowing into the school ground after a typhoon passed over Okinawa in September. Her photos showed the water&#8217;s major source was from the air station, she said.

At the February meeting, Leuking said the Marines would do what the DFAA had not been able to accomplish &#8212; act quickly.

&#8220;This was such a high-visibility issue I decided we could definitely do something fast,&#8221; he said.

&#8220;Our biggest concern was the elevator in the basement,&#8221; she said. &#8220;To protect the elevator from flooding damage, sand bags were piled up before the entrance of the elevator each time of heavy rain. I used to walk around the school ground whenever it rained to pick up any debris that could plug our small drains.

Facilities Engineering built a culvert, raised the earthen berm and reseeded the area.

&#8220;They did a great job,&#8221; Leuking said. &#8220;During our recent rains I flew over the area and saw several schools had severe flooding of their fields. But the school adjacent to the base fared pretty well.&#8221;

He said the drainage work cemented the base&#8217;s relationship to the school.

&#8220;Recently we started sending volunteers into the school to help teach English,&#8221; he said. &#8220;We try to be good neighbors, while still accomplishing our mission. For instance, 65,000 people annually visit the base when we open it up to the public for the Futenma Flightline Fair.&#8221;