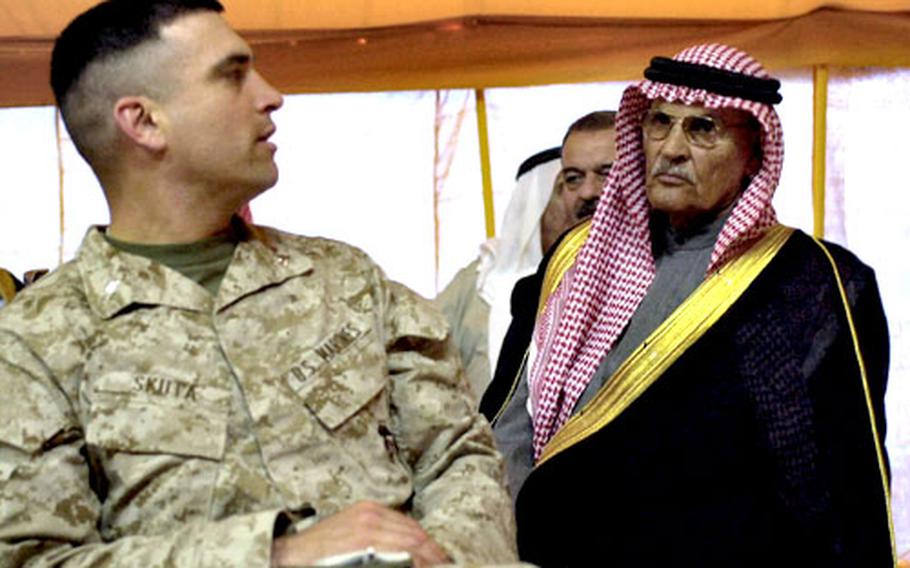 A Marine turns to listen to an Iraqi sheik during a meeting at Al-Asad Air Base in western Iraq on March 9. (Scott Schonauer / S&S)

A Marine turns to listen to an Iraqi sheik during a meeting at Al-Asad Air Base in western Iraq on March 9. (Scott Schonauer / S&S) 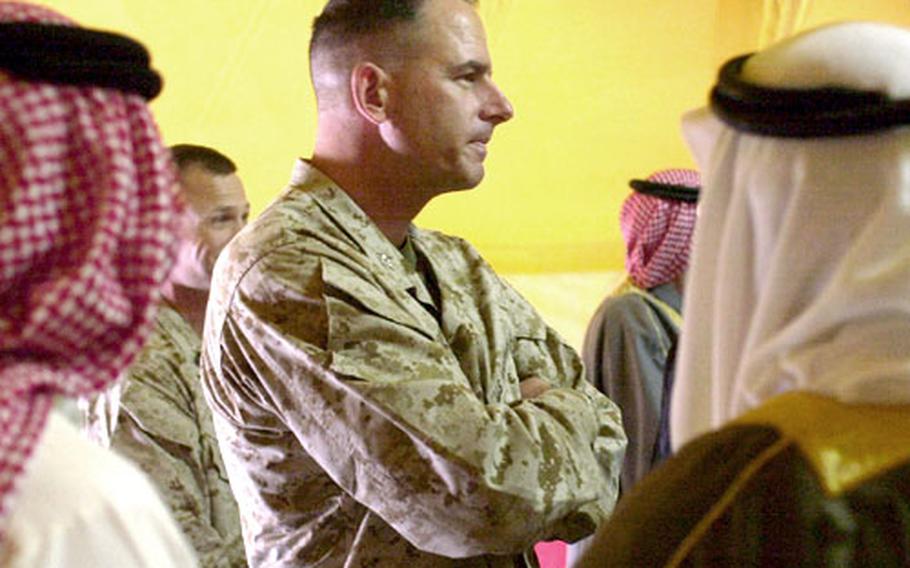 Col. Craig Tucker, commander of the 7th Marine Regiment, listens to a group of sheiks talk during a meeting at Al-Asad Air Base in western Iraq last month. (Scott Schonauer / S&S)

AL-ASAD AIR BASE, Iraq &#8212; If a Marine wants to talk with an Iraqi, he should know to always look him in the eye.

Marines need to know that shaking hands with an Iraqi&#8217;s left hand is a definite no-no, but that a kiss on the forehead, nose or right hand of a person shows extreme respect.

And most Marines understand that any interaction with women is frowned upon, but they shouldn&#8217;t be shocked to see a pair of straight men in Baghdad holding hands.

Thousands of Marines who deployed to Iraq last month went armed with these tips and others to help them better understand a culture that is shockingly different from their own.

Before the roughly 25,000 Marines arrived in western Iraq, they took a weeklong course on Iraq&#8217;s customs and history. Some units also went through an intensive, monthlong Arabic course so their members could better interact and communicate with Iraqis.

It is part of a new approach in Iraq by the Marine Corps to persuade citizens to help them bring security to the region.

Marines are taking over duties in the Anbar province &#8212; west of Baghdad &#8212; from the Army&#8217;s 3rd Armored Cavalry Regiment and the 82nd Airborne Division.

It&#8217;s a tough and dangerous assignment in a rough area that includes the Sunni Triangle, known for its many Saddam Hussein supporters.

In places such as Fallujah and Ramadi, U.S. military convoys and bases have repeatedly come under attack. On Wednesday, a roadside bomb in the province killed five U.S. troops.

Marines spent a portion of their first several weeks in Iraq trying to learn what they could from the departing soldiers, who had spent more than a year in Iraq.

Marine Col. Craig Tucker, commander of the Seventh Marine Regiment, said the cultural and language training would help complement the lessons they have learned from their Army counterparts.

Marines attended the briefings while they learned how to battle Iraqi insurgents.

Among the cultural &#8220;dos and don&#8217;ts,&#8221; according to a briefing outline from the Camp Pendleton, Calif.-based Marine Corps Division Schools command:

Courtesy is important and is not a weakness. The general rule is to &#8220;treat every Iraqi as if he were a colonel.&#8221;

Iraqis typically keep no distance between individuals, even when sitting. If you try to move away, they will close the distance.

Physical contact among the same sex is common. Men who are good friends often hold hands to express their friendship.

Never shake hands with your left hand. It is considered unclean because that is the hand many use to wipe their rear end.

Do not shame or humiliate a man in public. &#8220;Shaming a man will cause him and his family to be anti-coalition,&#8221; the briefing says.

Some Marines have tried to expand on their familiarity with the culture by interacting with Iraqis whenever possible. Kendall, who didn&#8217;t go through the intensive Arabic course, has learned a few Arabic greetings on his own.