Cultivating the business climate in Iraq 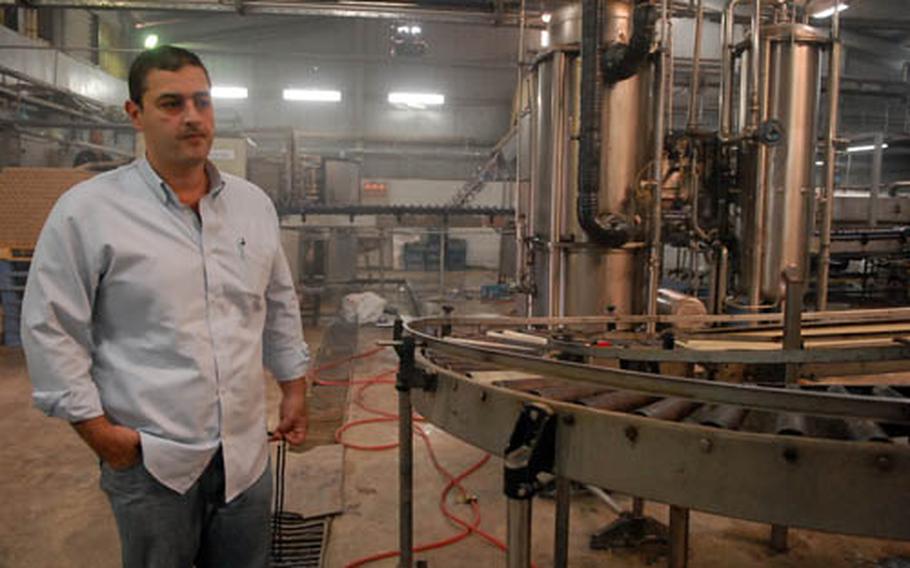 Zaid al-Khafaji inspects the floor of the Dijla Soft Drink Co. factory Tuesday in Baghdad’s Abu T’shir district. Al-Khafaji, who runs the company, returned to Iraq in April and ramped up his factory’s production after a 2 ½ year absence. American officials are trying to regrow Iraq’s economy by attracting businessmen like al-Khafaji back home. (James Warden / S&S)

Zaid al-Khafaji inspects the floor of the Dijla Soft Drink Co. factory Tuesday in Baghdad’s Abu T’shir district. Al-Khafaji, who runs the company, returned to Iraq in April and ramped up his factory’s production after a 2 ½ year absence. American officials are trying to regrow Iraq’s economy by attracting businessmen like al-Khafaji back home. (James Warden / S&S) 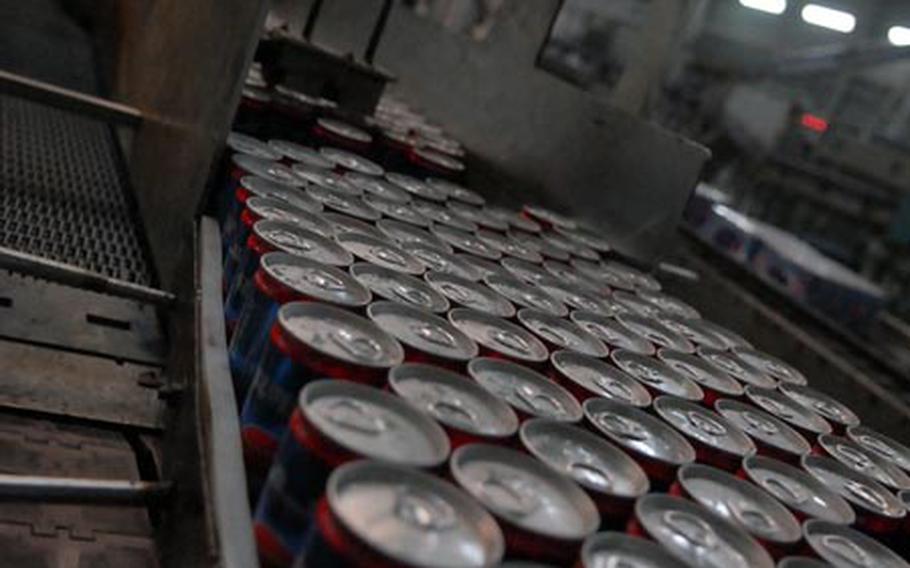 BAGHDAD &#8212; The Dijla Soft Drink Co. had been pumping out cola for seven years when security problems finally forced the al-Khafaji family to leave Iraq for Dubai in 2005.

The Baghdad company remained open, but as a shadow of itself, over the next 2&#189; years. The al-Khafaji family paid the workers to show up every day even though the owners never made back any of their money.

That changed in the middle of 2007, though. The al-Khafajis bought $1 million worth of new machinery and almost $700,000 worth of ingredients. Dijla now produces up to 23,000 cases of soft drinks a day that it sells to stores throughout Baghdad and the surrounding area.

"These are the kind of people we want to see come back," said Thomas Lynch, the team leader for the 1st Brigade Combat Team, 4th Infantry Division&#8217;s embedded provincial reconstruction team. "Putting this place back together involves bringing them back."

American officials&#8217; attempts to regrow Iraq&#8217;s economy are increasingly focused on luring back wealthy Iraqi business owners like the al-Khafajis.

The family was just one of many business owners who effectively shut down their firms in the wake of Iraq&#8217;s violence. Zaid al-Khafaji, who runs Dijla from its plant in Baghdad&#8217;s Abu T&#8217;shir district, estimates that 90 percent of his fellow businessmen fled Iraq.

When those businessmen left, their money went with them &#8212; to be invested outside Iraq or kept sitting idle on the sidelines, said E. Walter Koenig III, the senior business development adviser for the PRT.

Until recently, American attempts to revive the Iraqi economy have largely focused on sidewalk shops, market stalls and other small businesses that often employ only one or two people. The 4th Brigade Combat Team, 4th Infantry Division &#8212; which controls the Abu T&#8217;shir area &#8212; has pumped $2.7 million into the Baghdad economy through microgrants of $1,000 to $5,000, said Lt. Col. Paul Hossenlopp, the brigade&#8217;s deputy commander.

While this money has revived local markets, it can&#8217;t repair the industrial-sized companies that once churned away across Iraq. Bakeries are among the biggest of small businesses, and they employ an average of just seven people, compared with the 78 workers that keep Dijla Soft Drink Co. running.

Like the al-Khafajis, many of the owners of these large businesses are willing to put their own money to work. Many other factories require virtually no reinvestment; they only await their owners&#8217; return.

Foreign companies demand payment up front for pricey machinery. Iraqi banks can&#8217;t afford to loan them money at the levels that they need. Raw materials must often be imported from outside the country because supporting industries haven&#8217;t yet been established. Al-Khafaji had to pay the local district council $1,000 to create a security checkpoint near his factory.

Military leaders can&#8217;t just give money directly to the companies as they did with the microgrant program, because direct subsidies to wealthy families are unpopular, Koenig said.

Instead, they try to create an investment-rich environment. This can involve economic strategies such as helping banks lower interest rates and working to increase the amount banks have to lend.

But it just as often involves security initiatives to convince owners that their investments are safe. PRT members foster a dialogue between property owners and Iraqi security forces and smooth the way for extra patrols, new checkpoints and special waivers that allow on-site guards to carry guns.

"Anything we can do to tip the balance in the mind of the investors from risk to reward," Koenig said.

That&#8217;s exactly what Zaid al-Khafaji was waiting for. He said he was always waiting for the chance to restart his company.

Like a forest returning after a fire, successive waves of ever-larger investors will likely venture into Iraq until the country&#8217;s once-scorched economy has regrown. Here&#8217;s how that would happen:MOM AND POP STORES: Small businesses such as general stores, market stalls and bakeries would be the first to return. These are usually family run and mostly benefit the owners&#8217; immediate family. They employ few people &#8212; frequently just one or two &#8212; and often must import many of the products they sell, diverting Iraqi money outside the country.LOCALLY OWNED INDUSTRY: Factories and other medium-sized industrial businesses would reopen once their Iraqi owners decide it&#8217;s safe enough to head home. These companies sometimes require significant money to start running again, but many only await management&#8217;s return. While these plants and factories are often owned by wealthy families who have a portfolio of companies, they employ many more people than the small businesses that preceded them.GULF CONGLOMERATES: Middle Eastern companies are likely to be the first large-scale corporations to return to Iraq. They are more familiar with the country&#8217;s culture and more tolerant of risk.MULTINATIONALS: Massive global corporations have the least appetite for risk and tend to wait until a country&#8217;s investment environment has proved stable, although multinationals in the energy and hospitality industries have returned to Iraq much quicker.

Comparison shopping for ingredientsSecurity isn&#8217;t the only added cost Iraqi businesses face. The lack of supporting industries means companies must import raw materials that their out-of-country competitors can buy locally. The added costs can make Iraqi goods more expensive than products shipped from other countries. Dijla Soft Drink Co., for example, sells pop for about $5 a case, while Jordanian beverages sell for $4.80 a case in Iraqi markets.

Here&#8217;s a comparison of what some of the raw materials used by the company cost in Iraq and Jordan: