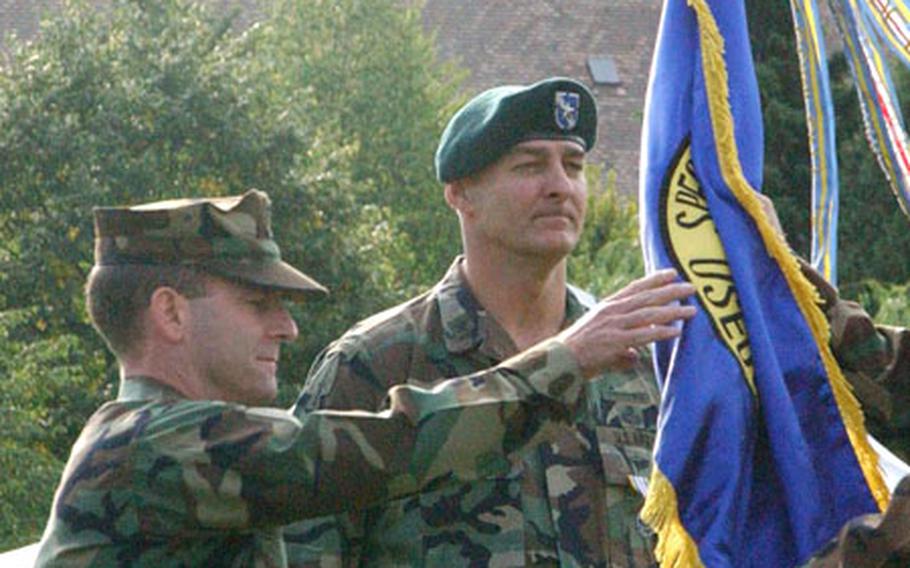 STUTTGART, Germany &#8212; Brig. Gen. Thomas R. Csrnko stated he would dedicate his personal energy and commitment as he took the helm of Special Operations Command Europe on Monday at Patch Barracks.

Csrnko replaces Brig. Gen. Gary M. Jones, who will assume command of the U.S. Army Special Forces Command at Fort Bragg, N.C. Prior to arriving in Germany, Csrnko served two years as chief of the Office of Military Cooperation at the American Embassy in Kuwait City.

&#8220;[I] look forward to meeting and working [with you] as we face the many challenges ahead,&#8221; Csrnko said to a crowd of several hundred people at Patch Barracks&#8217; Washington Square.

The crowd included special operations soldiers, sailors, airmen and Marines who are under the operational control of the special ops command. The Army Special Forces battalion, the Air Force special operations group and two Naval special warfare units deploy for training and operational missions in the U.S. European Command area of responsibility.

The command&#8217;s area of responsibility under the U.S. European Command covers 13 million square miles and more than one billion people.

In the last 14 months, special operations troops have been engaged in every contingency operation, including Operations Enduring Freedom and Iraqi Freedom, five European survey and assessment team deployments and five non-combatant evacuation operations.

Jones spoke of the history of the special ops command and mentioned the most recent mission in Liberia and the command&#8217;s continuing development of &#8220;good relationships &#8230; to combat terrorism and merchants of mass destruction.&#8221;

He compared the special operations soldiers, sailors, airmen and Marines to historical Spartan warriors and described an inspirational passage about leadership in the book &#8220;Gates of Fire.&#8221;

Making his final remarks to the command, Gary Jones thanked his troops for continually meeting the mission and accepting change in a true Spartan manner.