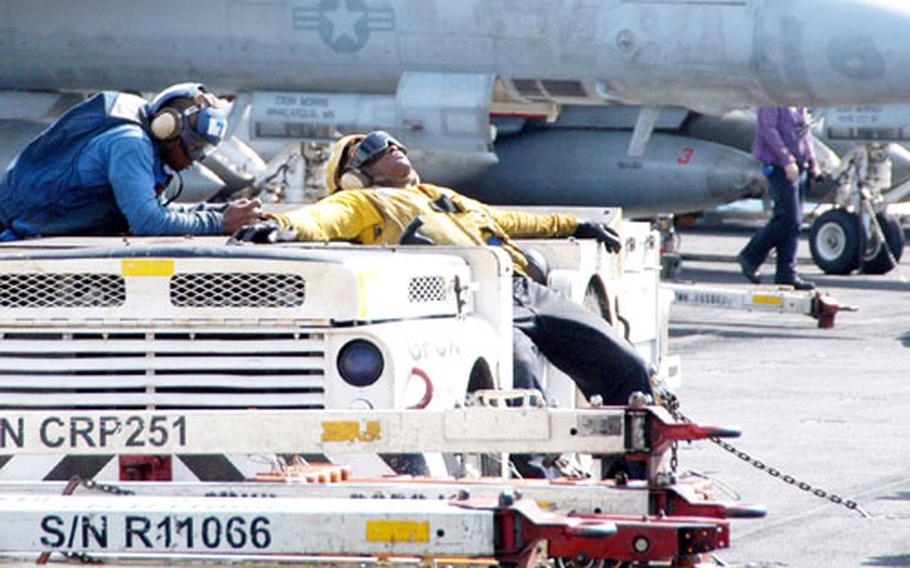 A flight-deck worker on the USS Ronald Reagan catches some rays in between the aircraft carrier’s takeoffs and landings. Near the end of their first combat operation, sailors reflect on ways to weather the cruise. (Allison Batdorff / S&S)

A flight-deck worker on the USS Ronald Reagan catches some rays in between the aircraft carrier’s takeoffs and landings. Near the end of their first combat operation, sailors reflect on ways to weather the cruise. (Allison Batdorff / S&S) 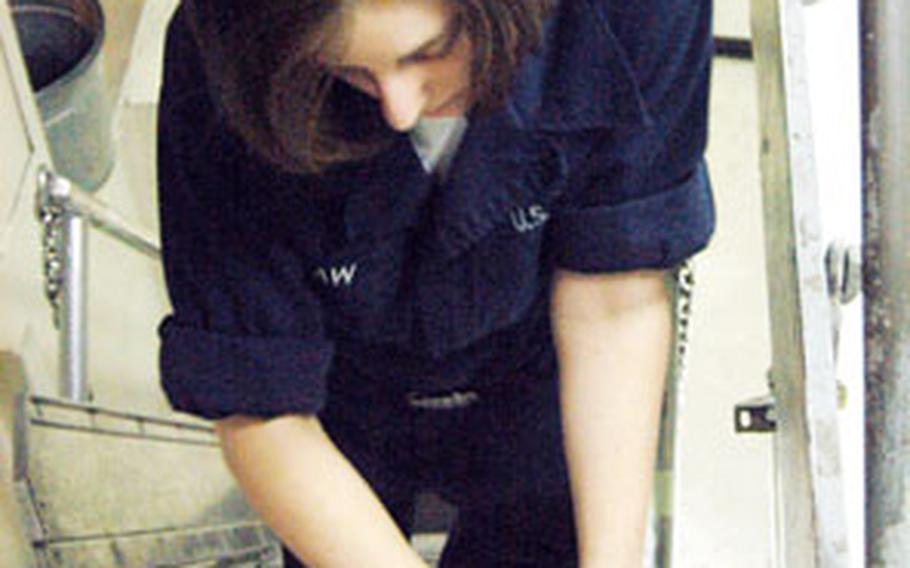 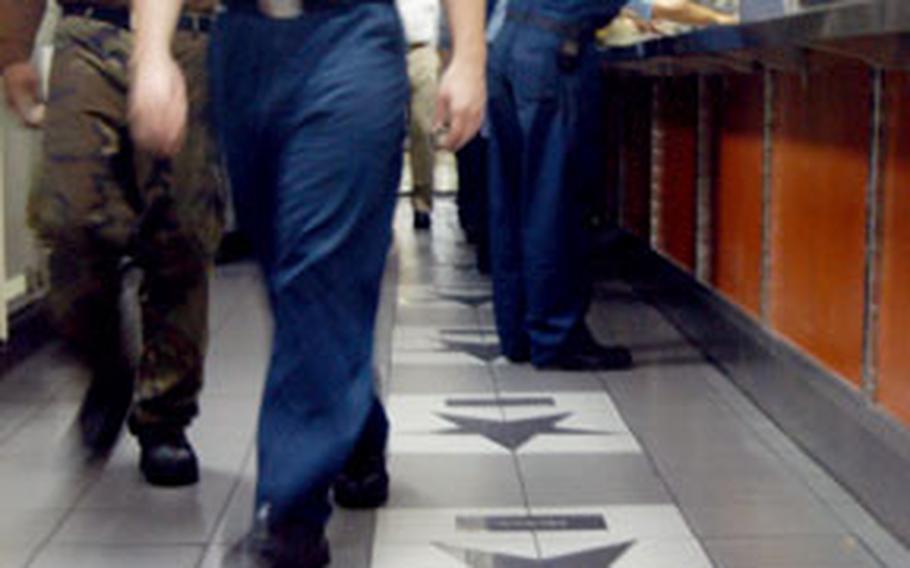 Each of the Navy’s aircraft carriers has its own namesake touches. The USS Ronald Reagan, the Navy&#39;s newest carrier named after the late president whose first career was as an actor — has a Hollywood theme. (Allison Batdorff / S&S) 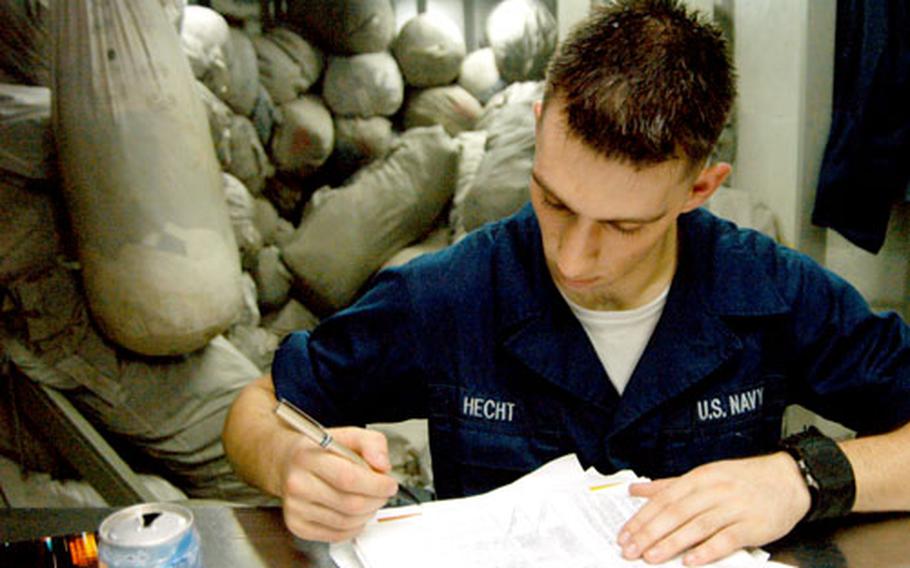 Airman Peter Hecht passes out the laundry in the USS Ronald Reagan. His shop turns around the crew’s laundry in 24 hours, washing up to 180 50-pound bags per day. (Allison Batdorff / S&S) 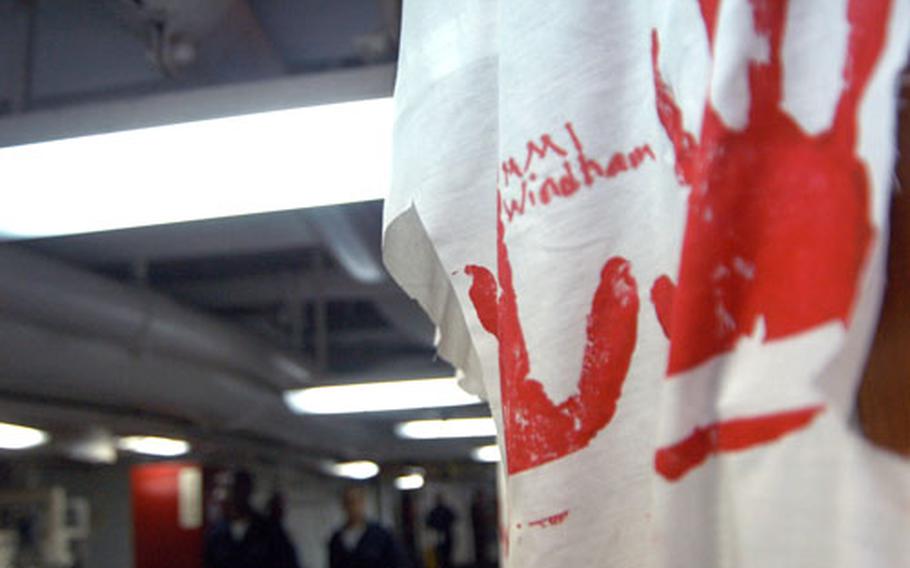 The USS Ronald Reagan family support group sent the handprints of the crewmembers’ children to the carrier while it was on its first six-month cruise. Sailors could cut out the prints and keep them. (Allison Batdorff / S&S)

Sharing a room with 100 other people in bunk beds. Climbing endless ladders. End-of-cruise food. Staying on the same ship with the same 6,000 people for six months.

Life on an aircraft carrier does have its challenges. Sailors on the USS Ronald Reagan &#8212; the Navy&#8217;s newest carrier, commissioned in 2003 &#8212; are just wrapping up their first long cruise after stopping in Singapore, Australia, Malaysia and Hong Kong and undergoing the carrier&#8217;s first combat operation with 95 days in the Persian Gulf as part of Operation Iraqi Freedom. The carrier also participated in last week&#8217;s Valiant Shield exercise off the coast of Guam, which ended Friday.

Carriers often are likened to floating cities as they carry barbershops, have a post office and offer retail stores for their sailors. Even so, staying on one for long periods of time requires a special sort of stamina, enduring the loss of privacy and missing friends and family.

Those on the USS Ronald Reagan shared some of their survival tips to weathering a cruise:

Stay busy. Otherwise, you&#8217;ll go crazy, says Petty Officer 3rd Class Nicole Campbell. This is her first long cruise, she said. &#8220;I had to stay focused. I took classes and got my surface-warfare pin, which made the time go faster.&#8221;Throw yourself into your work, says Seaman Recruit Shawna Shaw, whose job is to clean gunky boot grime from ladder wells every morning.Draw, watch movies, get some air in the hangar bay, do anything but dwell on the negative, says Petty Officer 3rd Class Emily Lawson. &#8220;I try to look at the big picture but try to live day to day.&#8221;Communicate with the outside world, says Chief Petty Officer Charwin Carrington. The flight deck worker has three kids and a wife at home in San Diego. &#8220;I miss them,&#8221; Carrington said. &#8220;But e-mail closes the distance.&#8221;Be cool, says Airman Jacqueline Pfeffer. She should know the importance of that advice: She works in the &#8220;press deck,&#8221; where hundreds of uniforms are ironed every day.Find good acoustics, says Petty Officer 1st Class Donald Child, who found a spot outside the hangar bay to practice his saxophone. &#8220;It sounds as good as a train station,&#8221; he said.The USS Ronald Reagan will reach its permanent base in San Diego in the next few weeks.