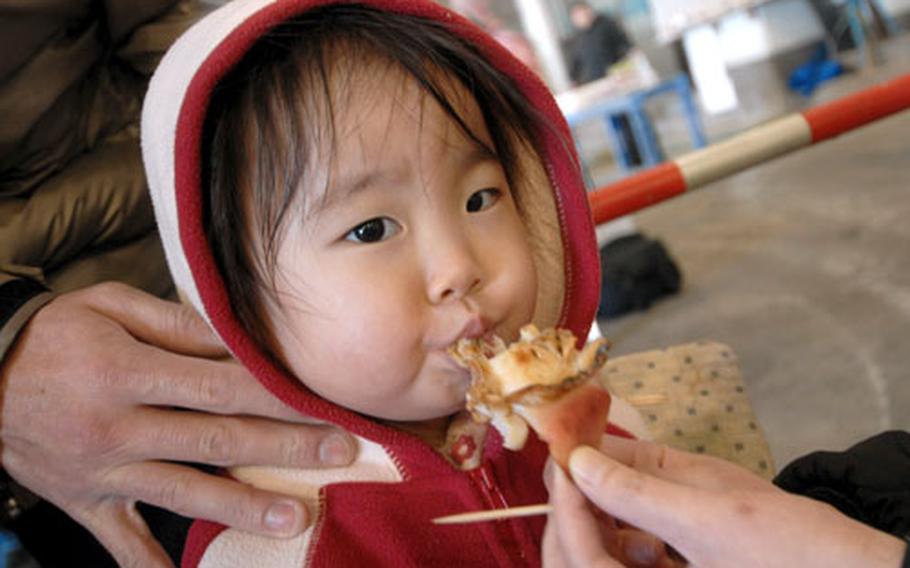 A little girl takes a bite of free grilled hokki, or surf clam, Sunday while visiting the 9th annual Hokki Festival at the Misawa city fishery port. About 20,000 people from surrounding cities, and Misawa Air Base, were expected to attend. (T.D. Flack / S&S)

A little girl takes a bite of free grilled hokki, or surf clam, Sunday while visiting the 9th annual Hokki Festival at the Misawa city fishery port. About 20,000 people from surrounding cities, and Misawa Air Base, were expected to attend. (T.D. Flack / S&S) 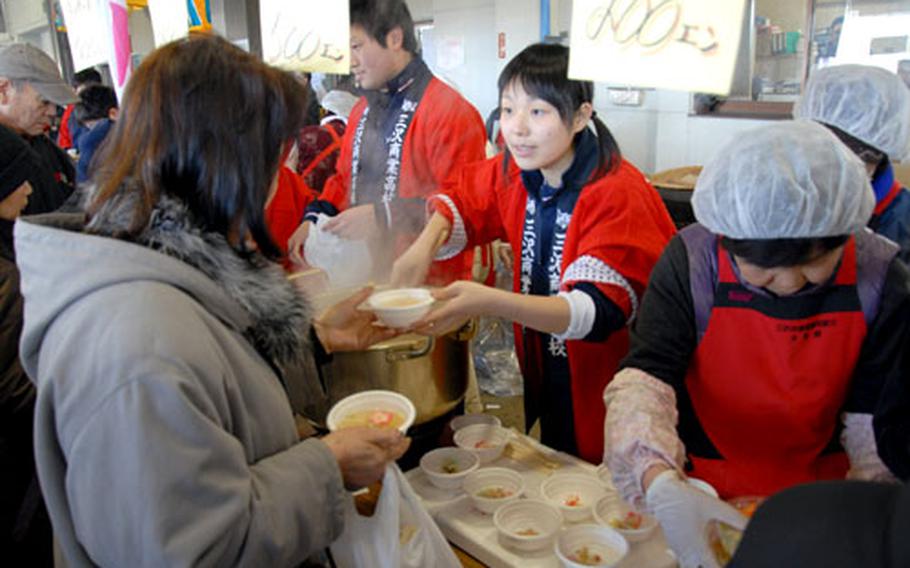 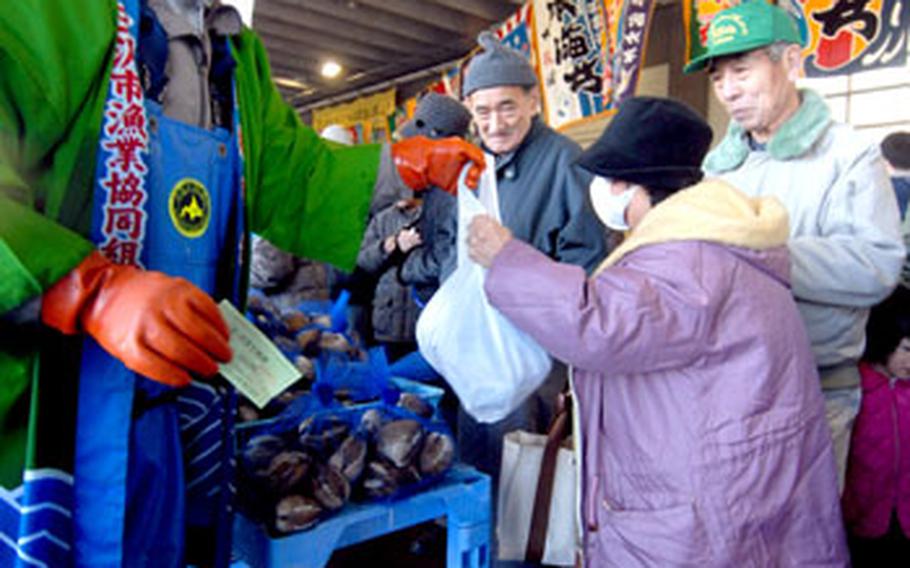 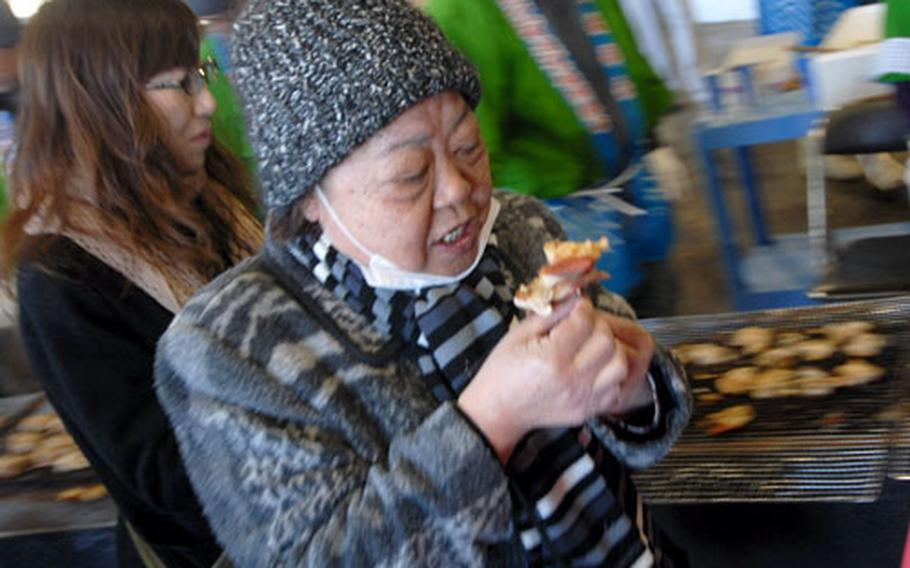 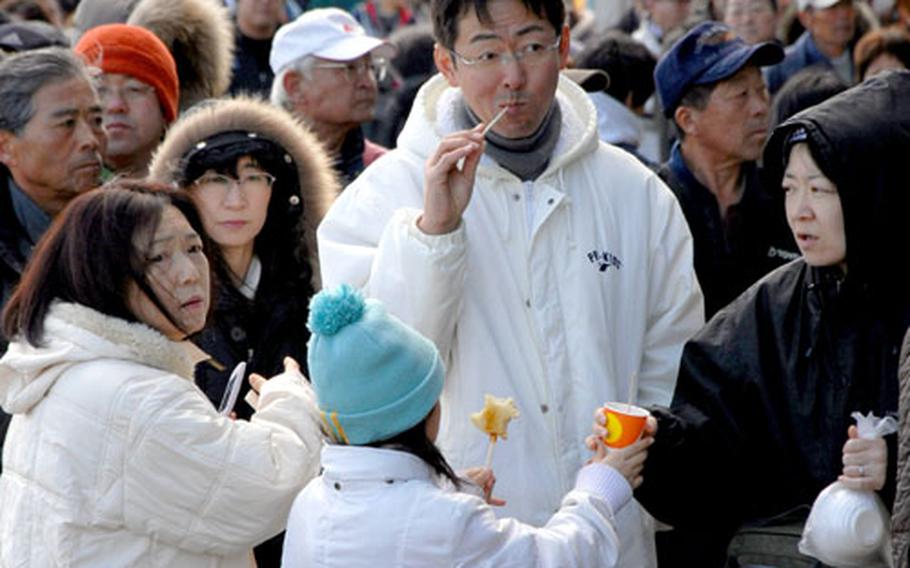 MISAWA, Japan &#8212; Tens of thousands of people &#8212; including members of the U.S. military community &#8212; braved the icy winds and gathered at the city fishery port for the 9th annual Hokki Festival on Sunday.

Lines stretched along the port, with people waiting up to 30 minutes for a free sample of the more than 1,000 pounds of grilled hokki &#8212; Japanese for surf clam &#8212; to be given away. But lines were even longer for those who wanted to buy large bags or boxes of the sweet-tasting shellfish, marketed as Misawa&#8217;s specialty product.

Susumu Nakanowatari, head of the city&#8217;s agricultural and fisheries department, said through a translator that organizers stocked about 18,000 pounds of hokki to sell to the 20,000 people expected to attend.

The shellfish was grilled, served in a stew, and served with vegetables and vinegar. But the most popular with the crowd was hokki sashimi &#8212; thin slices served raw.

Teams of workers could barely keep up with customer demand, threading giant storage tanks through the crowds. In the background, "Hokki Ondo," a song written, performed and recorded by Misawa city residents, blared over a PA system.

Nakanowatari explained that hokki may only be harvested from December through March in this area, and that the festival commemorates the end of the season.

And this season, he said, local restaurants launched their own hokki campaign, with each creating its own signature dish it began serving in December.

Lt. Cmdr. Alan Chace, of Naval Air Facility Misawa, brought his family to the festival on the advice of a neighborhood restaurant owner.

Working their way through the crowds, Chace, his wife, Alison, and their children, Will, 8, and Libby, 7, contemplated whether to wait in line for a sample.