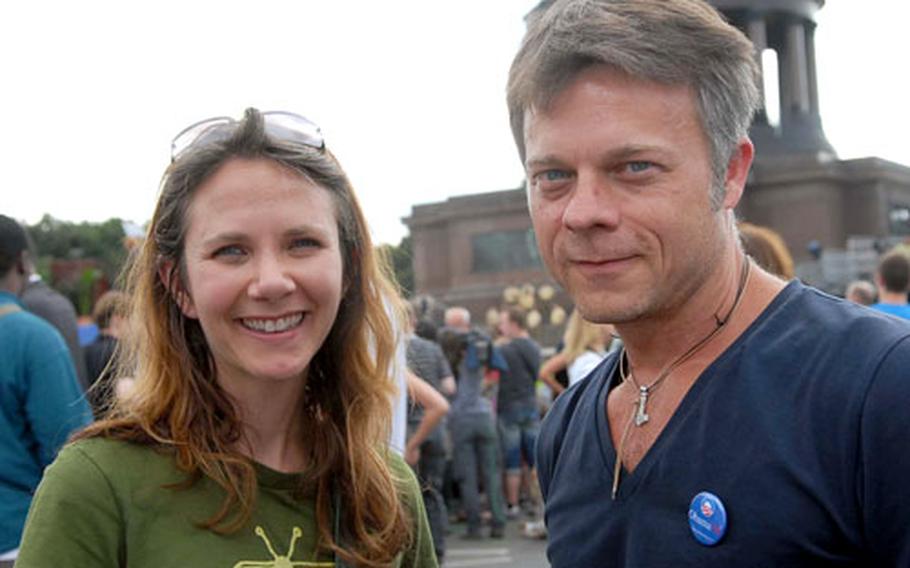 BERLIN &#8212; Ann Barocto packed up the kids and her mother and drove seven hours from Spangdahlem Air Base to see Sen. Barack Obama up close and personal.

"Giant Barack Obama supporter," said Barocto of herself, a 36-year-old major in Air Force Reserve whose husband is serving at Spangdahlem since October. "It&#8217;s been hard for me not to be in the States during the campaign. When I heard he was coming to Germany, I was ecstatic."

She arrived more than three hours early for a prime spot in Berlin&#8217;s Tiergarten park, in front of the Victory column &#8212; with the angel atop the column facing the other way &#8212; where Obama was soon to speak on the trans-Atlantic relationship. She was joined by hundreds more international early birds who stood or sat on the pavement in front of a podium flanked by potted palms, and, to the left, a bandstand that caused a great deal of speculation.

But he was there for Obama, to see him orate, to enjoy a historic event, "to live the moment."

Estimates of the expected crowd ranged between 10,000 and 1 million. By 5:30 p.m., it was impossible to say how many people had gathered, although it was possible to see there were many, many news media representatives. They had all gone through a metal detector, a bag check and a pat-down, just like at the airport.

Non-media people were prohibited from carrying in bags. That wasn&#8217;t a problem because there were tents selling wurst and beer.

Which had not gone unnoticed by Yannick Nelis, a Belgian law student, and his group of likewise shirtless five friends. The group were on their "fourth, fifth, sixth" beer, said Nelis, 22, what with their being on holiday and all.

The young men had come not for the speech exactly, but for a good time in Berlin.

It was not Bruce Springsteen.