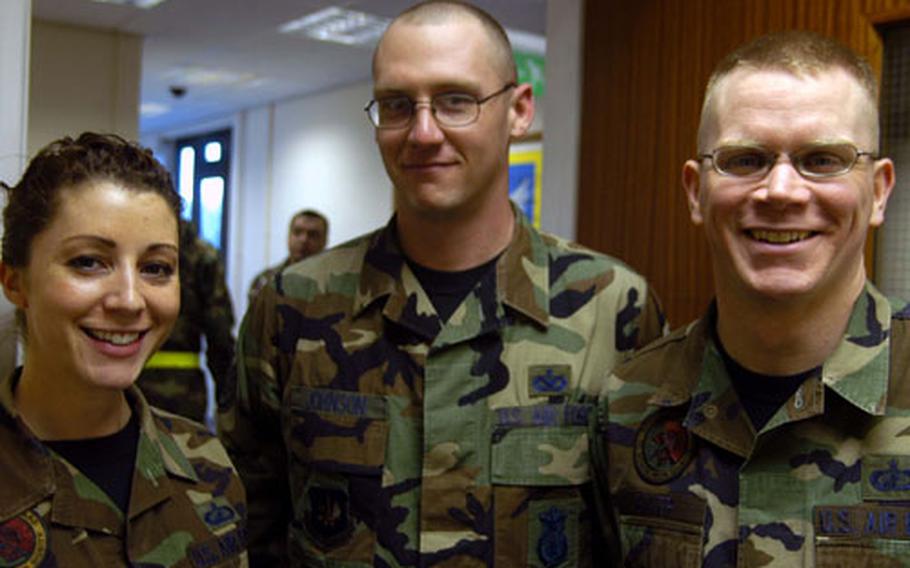 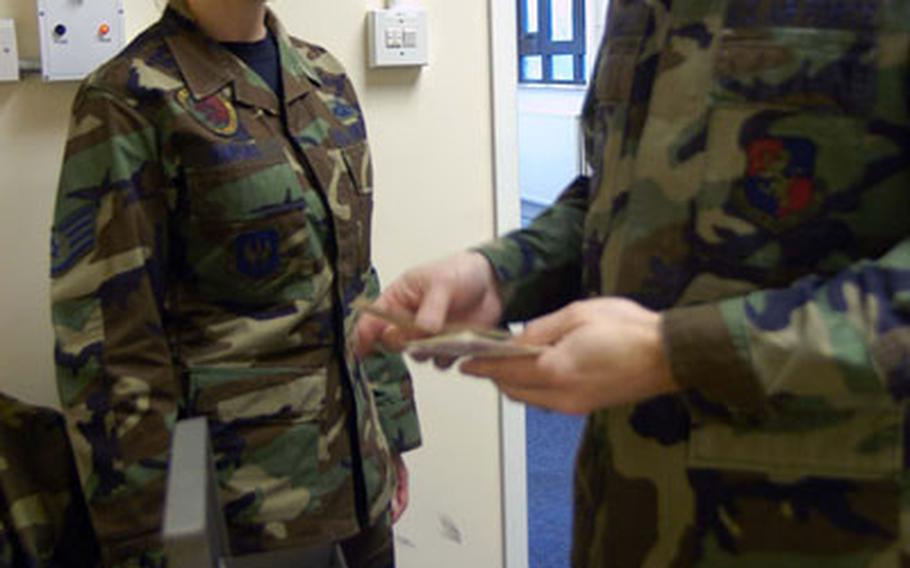 Staff Sgt. Sophia Vargas, left, and Staff Sgt. Scott Baker count up the cash in the base&#39;s gate fund, set aside to help airmen who can&#39;t afford a ride home after a night out on the town. (Ben Murray / S&S)

RAF CROUGHTON &#8212; A driving safety group at RAF Croughton in the countryside west of London have come up with a novel way to make sure airmen get home after a night on the town.

Sitting at the security desk not far from the front gate is a box of British cash set aside specifically to pay cab fares for airmen whose original plans to get home have fallen through and can&#8217;t afford the fare back to base.

Any airman who finds himself or herself in that kind of a pinch can simply tell a cabbie to drive to the front gate and ask the guard to have the fare sent down, said Staff Sgt. Scott Baker, president of the local Airmen Against Drunk Driving chapter and manager of the fund.

Airmen are just asked to replenish the amount they took out the next day, or as soon as possible thereafter, Baker said.

It&#8217;s an initiative that started last March at the rural base, located a 20- to 30-minute ride from the most popular clubs in the area, but a major appeal of the program is the anonymity it offers.

Unlike other programs that might require inebriated airmen to contact other airmen or, more reluctantly, commanders, for late-night rides, with the Croughton pot, no names are logged, no bosses are contacted &#8212; even the amounts of money aren&#8217;t tracked with specificity.

Even airmen who don&#8217;t live on the base can use the fund. Airmen trying to get home can simply stop by the gate, ask the driver to estimate the remaining fare to their house and take that amount with them, said Staff Sgt. Sophia Vargas from the 422nd Air Base Group secretary for the local AADD.

The fund was started with an initial 85-pound donation from a local Masonic temple and additions from Croughton commanders, but with an honor system of replenishment, has the fund dwindled in the past year?

It&#8217;s actually grown to 147 pounds, Baker said, through additional donations, while Croughton in the meantime has gone more than 115 days since its last DUI incident.

That&#8217;s a number AADD members are proud of at a base where airmen tend to travel for entertainment, especially on Saturday nights when even the base club isn&#8217;t open for business.

Base officials said they couldn&#8217;t provide solid numbers on how many people have used the cash to date, however, because they don&#8217;t keep track of it &#8212; they simply check the amount from time to time to make sure there&#8217;s money available, Baker said.

Baker and Vargas also stressed that the gate fund shouldn&#8217;t be relied on as a means to get home, calling it a &#8220;last resort&#8221; option. The local AADD offers airmen other options to keep them from driving after drinking, including rides home from volunteer drivers. He said, however, that airmen should plan to get themselves home first.