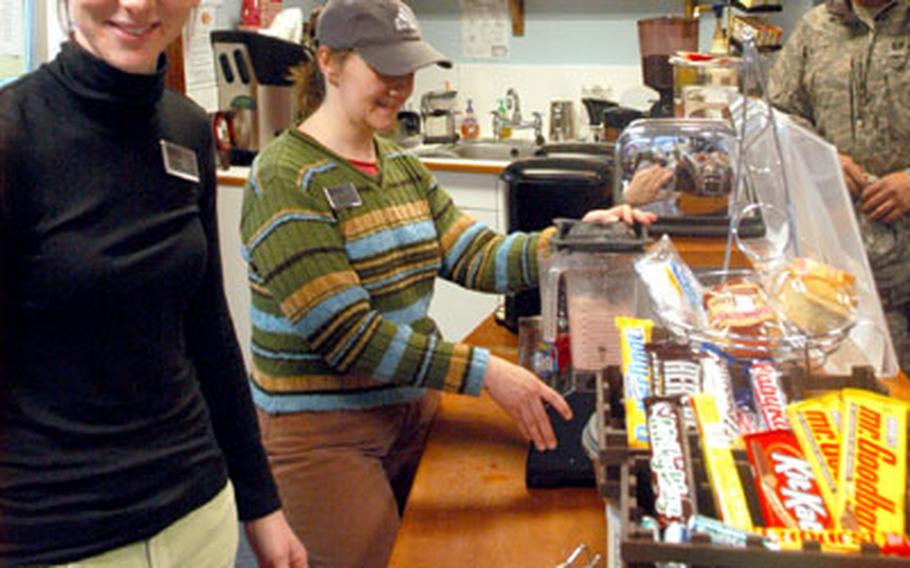 A dedication to a variety of services despite its small size earned the RAF Croughton Community Center best in USAFE for 2007. Manager Shelley Radford, left, attributes the distinction to novel excursions and working with the community to set up activities. Tech. Sgt. Raymond Wilson, right, of the 422nd Communications Squadron, gets his caffeine fix from center employee Mary Kilgore. (Geoff Ziezulewicz / S&S)

RAF CROUGHTON &#8212; Shelley Radford works hard as the manager of RAF Croughton&#8217;s community center, a small facility on a small base serving about 300 422nd Communications Squadron airmen in rural Northamptonshire.

With such a small base, leisure activities become that much more vital, she said, and the center has a captive audience walking through its doors each day.

The efforts of Radford and her staff were rewarded last month when the Croughton Community Center was named U.S. Air Forces in Europe&#8217;s best for 2007, beating out massive luminaries throughout the continent.

This month Croughton will go up against other Air Force command winners for the best-in-service distinction.

&#8220;What was particularly impressive to the panel of judges who scored the USAFE packages was the diverse amount of programs offered at Croughton,&#8221; Maili Peters, a USAFE Services official, said in an e-mail. &#8220;The high level of programming offered at this [base] exemplified what Community Centers are all about.&#8221;

When it comes to planning those programs, Radford, in her eighth year working at Croughton, said she has her own ideas but is always open to folks&#8217; suggestions.

In a bit of grass-roots advertising, Radford attaches little adverts for theater outings or other activities to the cups of coffee the cafe sells.

In this close-knit community, the center serves as a cafe, Internet point, movie theater and a host of other service and entertainment spots.

A reptile specialist brought &#8220;snakes, iguanas and things&#8221; to the base earlier this year, and Radford said she&#8217;s trying to expand her shop and start a theater group.

Tech. Sgt. Raymond Wilson of the 422nd said he&#8217;s in the Community Center at least two or three times a week and he likes the informal movie nights.

A small community is no excuse for small- minded activities and services, Radford said, whether it&#8217;s 50 participants or two.