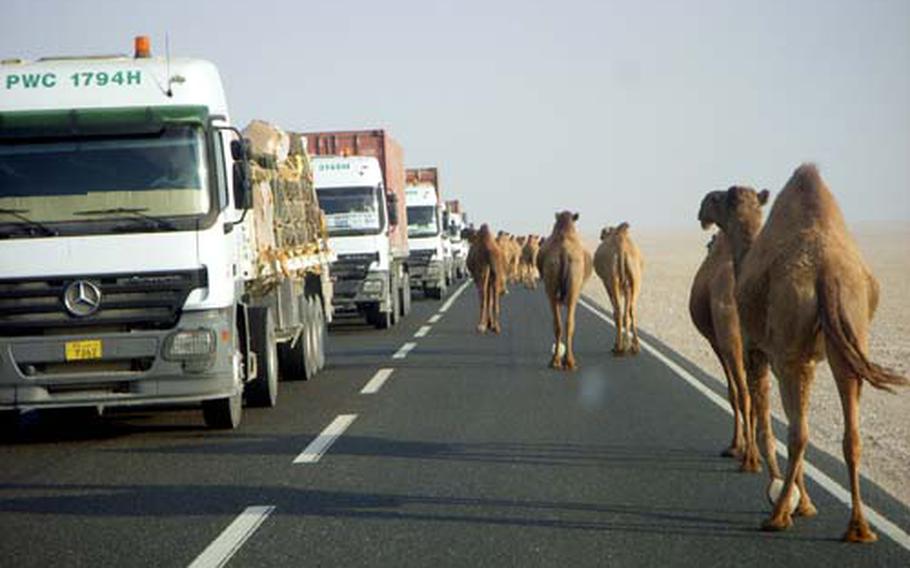 Camels take over one side of the road that soldiers of the the 623rd Movement Control Team must face on a daily basis on their hour-long commute from Camp Buehring to Khabari Alawazem Crossing in Kuwait. (Courtesy of the U.S. Army)

Camels take over one side of the road that soldiers of the the 623rd Movement Control Team must face on a daily basis on their hour-long commute from Camp Buehring to Khabari Alawazem Crossing in Kuwait. (Courtesy of the U.S. Army) 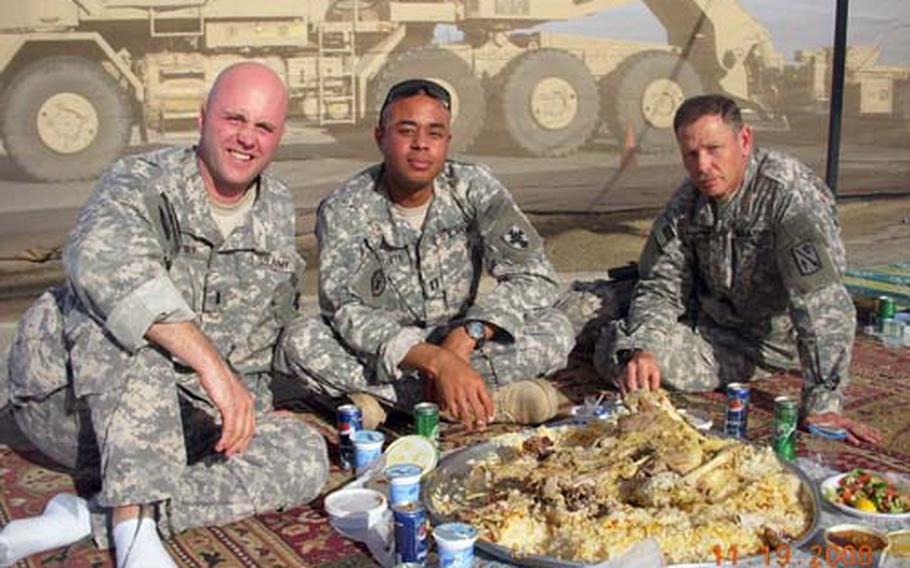 Soldiers enjoy a traditional Kuwaiti lunch at K-Crossing on the Kuwait-Iraq border. The 623rd is the first U.S. Army unit to deploy from Japan to Southwest Asia. (Photo courtesy U.S. Army) 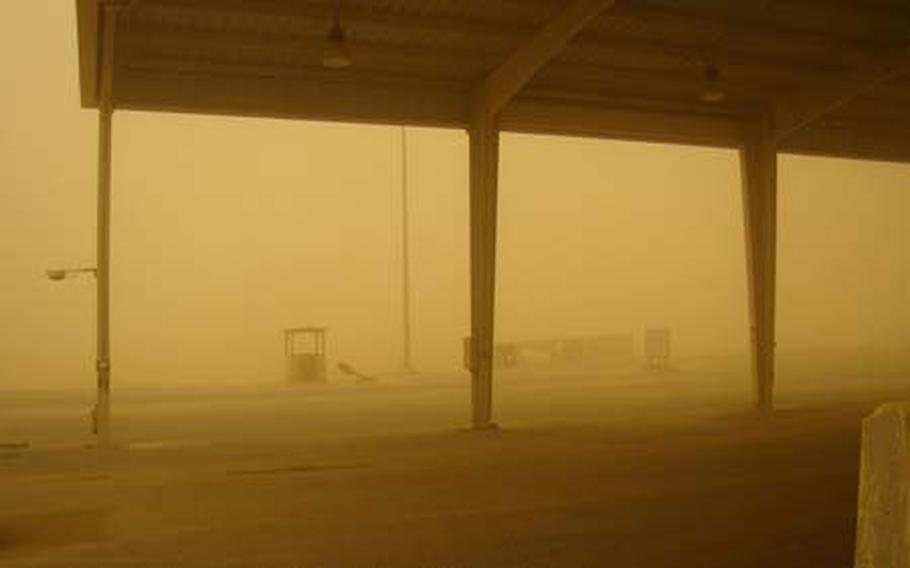 A sand storm blankets Khabari Alawazem Crossing, also known as K-Crossing, along the Kuwait-Iraq border. K-Crossing is a Kuwaiti military installation where all military-related traffic must pass on the way to and from Iraq. (Courtesy of the U.S. Army) 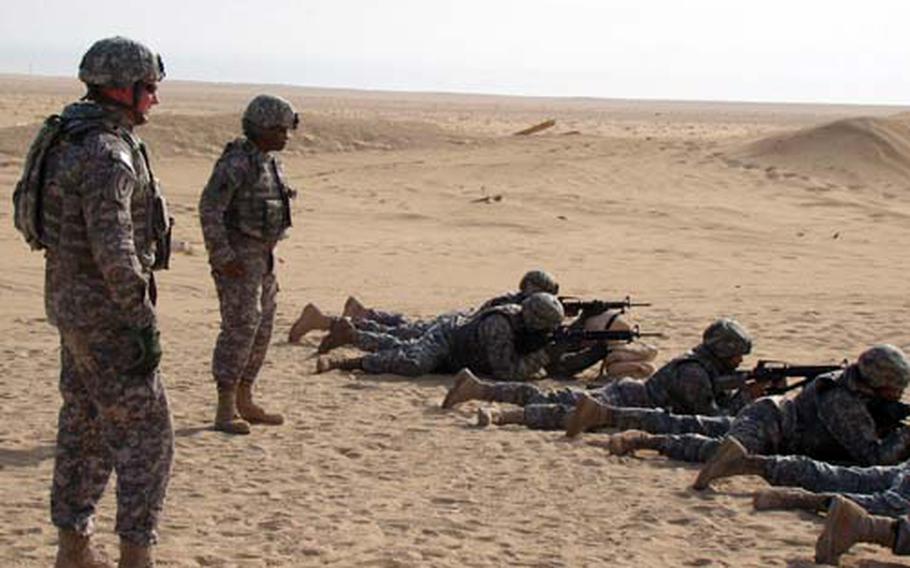 Not many daily commutes in the U.S. military involve dodging herds of camels, but for the 20 members of the 623rd Movement Control Team, it&#8217;s just part of deployed life in Kuwait.

The soldiers departed Sagami Depot, Japan, in August and are serving a one-year deployment at Khabari Alawazem Crossing &#8212; or K-Crossing &#8212; along the Kuwait-Iraq border. The 623rd is the first U.S. Army unit to deploy from Japan to Southwest Asia, Capt. Joseph Batiste, the unit&#8217;s commander, told Stars and Stripes when the soldiers deployed.

K-Crossing is a Kuwaiti installation through which all U.S. military-related traffic must pass on the way to and from Iraq. The soldiers from the 623rd work with a civilian team to track convoys, check paperwork and work with Kuwaiti customs officials to keep traffic moving smoothly.

They also give convoy commanders information about potential threats and road conditions that might await them in Iraq.

"We do a lot of liaison work with the Kuwaitis," 1st Lt. Matthew Ferry said in a phone interview Thursday.

Kuwaiti customs officials are on the lookout for banned items like alcohol and pornography, Ferry said.

"We had a driver try to sneak in 60 bottles of Johnnie Walker Red," said Sgt. Abdoul Fakih, the noncommissioned officer in charge of regulating southbound traffic, who said such instances aren&#8217;t uncommon. A fifth of whiskey can sell for about $200 in Kuwait, Ferry said.

"We weren&#8217;t expecting to be put in such a civil-affairs mission," Ferry said. "It&#8217;s been a very pleasant surprise getting to work with the Kuwaitis so closely."

That mission has created good working relationships and friendships, he said, adding that the 623rd soldiers have the option to eat daily with the Kuwaiti soldiers.

"They are great hosts," he said, describing the traditional lunch with their allies as "huge plates of lamb with mountains of rice."

Sharing meals is a way of gaining wasta, or influence, among the Kuwaitis, which helps in getting things done later back at the checkpoint, Ferry said.

"I have a little bit of wasta," he said.

If a convoy headed into Iraq is ready to go but is being held up by a paperwork issue, using a little wasta might smooth over the situation and allow the trucks to move on while a form is being fixed, he said.

"Life here is not bad, at times dull and repetitive," Spc. Jeffrey Grigg said in an e-mail to Stripes.

But while life at K-Crossing is relatively hassle-free, there&#8217;s an element of danger that the 623rd soldiers face every day &#8212; the commute.

The soldiers live at Camp Buehring, a U.S. Army base in the Kuwaiti desert about an hour from K-Crossing, and they must navigate an hourlong drive each day.

Ferry said the 623rd soldiers know they are fortunate to be stationed away from hostile fire and enemy attacks but that Kuwaiti roads present plenty of their own threats.

"A lot of us could tell of close calls we have had with driving here in Kuwait," Staff Sgt. Jamelia Fritz said in an e-mail. "Most of the drivers are inexperienced or careless, and the camels just plain take over the road. Most, if not all of us, have experienced being run off the roads by oncoming convoys or camels."

Fakih said that just the other day, while driving up to the border, he ended up on the side of the road after avoiding two sets of oncoming headlights taking up both lanes of the highway.

The hardest part for many of the soldiers is being away from home.

"I must say that spending holidays away from my family was the worst thus far," Staff Sgt. Vince Webber said.

For Fakih, missing the holiday season wasn&#8217;t nearly as hard as being away from his pregnant wife.

Fortunately, Fakih said, he was able to make it home for his two weeks of mid-deployment leave just three days before his wife gave birth to their second daughter.

But in the meantime, he and the rest of the team will keep moving convoys across the border and looking out for camels when they drive.