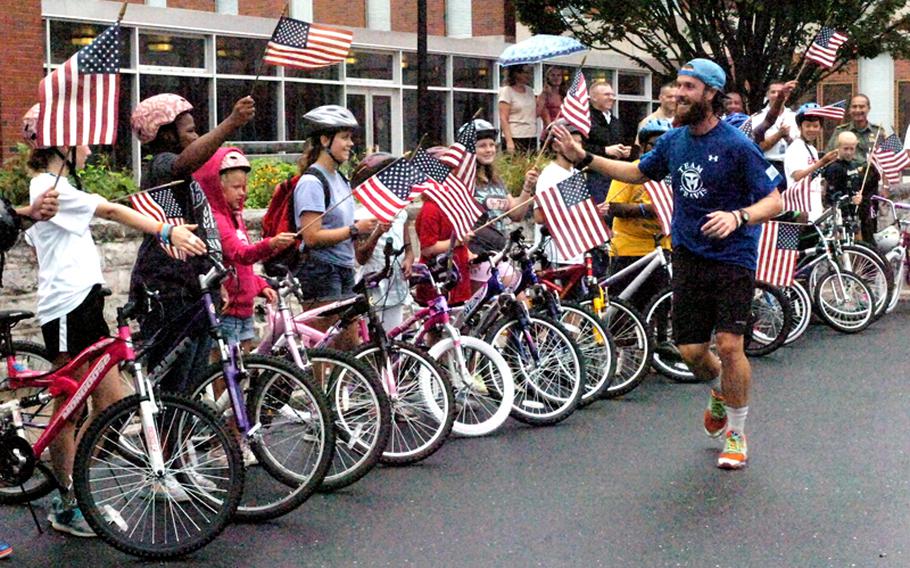 Cyclists greet Albie Masland as he passes through his hometown of Carlisle, Pa., near the end of his cross-country run on August 10, 2012. (U.S. Army)

Albie Masland admits that he'd be lying if he said &ldquo;Forrest Gump&rdquo; didn't inspire him to run across the U.S.

But it was the thought of the challenges that military veterans face upon returning from war and readjusting to civilian life that finally got the 29-year-old from Carlisle, Pa. pounding nearly 2,900 miles of pavement for charity.

With two days and 30 miles left to go as of Thursday, Masland was nearing the end of his 154-day cross-country run &mdash; dubbed &ldquo;Operation Amerithon&rdquo; &mdash; for the Travis Manion Foundation, which helps veterans and the families of those killed in combat. The charity is named for a 26-year-old Marine who was killed by sniper fire in Iraq in April 2007.

&ldquo;There&rsquo;s a lot of different issues facing veterans as they return and adjust to civilian life,&rdquo; Masland said by phone during a lunch break in Germantown, Md. &ldquo;They come back from a war zone to everyday-life sort of problems &mdash; paying bills, managing relationships, living a happy healthy life. A lot of people overlook those issues if they&rsquo;re not directly connected to a veteran.&rdquo;

Since he began the grueling trek on March 17 in Dana Point, Calif., Masland has raised nearly $40,000 for the charity as he made his way through Los Angeles, Flagstaff, Santa Fe, Amarillo, Oklahoma City, Tulsa, St. Louis, Indianapolis, Pittsburgh and (eventually) Washington D.C.

His run will officially come to an end at the Marine Corps Memorial in Arlington, Va. on Saturday. He plans to start his final leg at North Chevy Chase Park in Maryland at 10 a.m. and arrive in Arlington at about noon.

&ldquo;I love my country and I love those that fight for it,&rdquo; Masland said. &ldquo;If I can help make that transition (for veterans) a little easier, if I can create some awareness, then I&rsquo;ll really be showing my support in a big way.&rdquo;

His daily regime for the last five months has been to hit the road from anywhere between 18 to 26 miles for around five hours, or as many as eight.

A support team that includes his sister meets him by car every four miles, bringing him water and other supplies.

The rest of the day, he&rsquo;s preparing for the next day&rsquo;s grind by taking ice baths to help with the swelling and soreness, keeping his legs elevated and trying to get some sleep.

&ldquo;I&rsquo;ve held up pretty well. I&rsquo;m pretty durable,&rdquo; Masland said. &ldquo;At a certain point, I was able to trick my mind and my body that I was fine every day with that amount of pain.&rdquo;

When Masland &mdash; who completed two years at Thomas Jefferson School of Law in San Diego and was working as a waiter in Pennsylvania &mdash; figured he wanted run for veterans, he called his friends at Bullets2Bandages, an online apparel company that donates proceeds from its bullet jewelry line to veterans nonprofit organizations.

Those friends, Erik Spalding and Cole Evans, who are former Naval Explosive Ordinance Disposal officers and co-founders of Bullets2Bandages, had graduated from the U.S. Naval Academy with Manion and connected Masland with the charity.

&ldquo;As Albie approaches the finish line, we encourage everyone to show our nation&rsquo;s veterans the same support and gratification through a simple donation of any amount to the Travis Manion Foundation,&rdquo; Spalding said in a statement. &ldquo;With the successful establishment and triumphant outcome of Operation Amerithon, we are ready and eager to continue to support other fundraisers in the future.&rdquo;

Beyond reaching the finish of &ldquo;Operation Amerithon&rdquo; at the Iwo Jima Memorial, Masland plans to continue on to Dewey Beach, Del., just to make his coast-to-coast run official.

And looking even further ahead, he would like to partner with Bullets2Bandages to turn Operation Amerithon into a national race series to raise money for veteran nonprofits.

&ldquo;I've found a cause honoring the fallen and saying thanks in my own way,&rdquo; Masland said. &ldquo;And given myself one heckuva challenge running across the country.&rdquo;